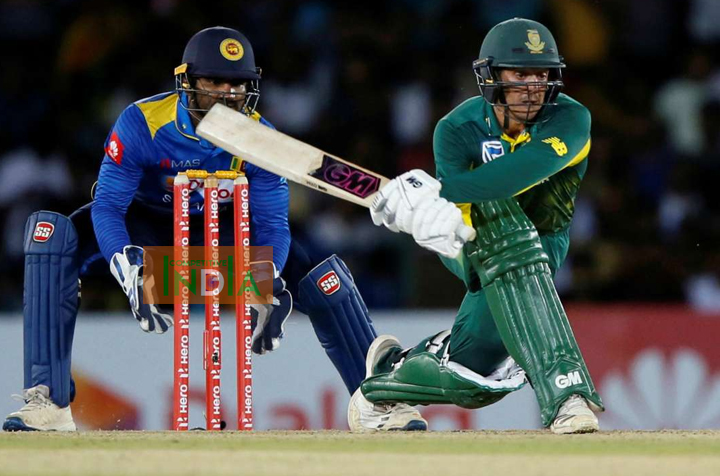 Wicketkeeper-batsman Quinton de Kock made 87 to help South Africa beat Sri Lanka by four wickets in the second one-day international in Dambulla on Wednesday. Chasing 245 for victory, the visitors rode on a 91-run opening partnership between de Kock and Hashim Amla, who scored 43, to achieve their target in 42.5 overs and take a 2-0 lead in the five-match series. Sri Lanka’s mystery spinner Akila Dananjaya took three wickets. The third match is scheduled for Sunday in Kandy.

Sri Lanka have been going through a barren run in the ODI format since the 2015 World Cup, capsulised by the point that they have lost nine bilateral series in that period. During tough times, Sri Lanka would have hoped to paddle through the endless tunnel of darkness to reach safer waters. Unfortunately for the island nation, they still seem to be stuck in the tunnel as they slid to a four-wicket loss in the second ODI against South Africa in Dambulla, on Wednesday (August 1). On a surface that looked quite tricky to bat on, the visitors chased down the target of 245 in 42.5 overs to take a 2-0 lead in the five-match series.
After putting up a decent effort with the bat on a used-up surface, the Sri Lankan camp would have hoped for a fine show in the field. Unfortunately, the hosts fluffed sitters and followed it up with a slew of misfields. To make matters worse, barring Akila Dananjaya, Sri Lanka’s bowling was also mostly below par.
Just to encapsulate Sri Lanka’s poor fielding, South Africa had amassed just 19 on the board when Hashim Amla (43) flicked one straight to midwicket only for Kusal Perera to drop a dolly. With the tourists on 29 for no loss, Quinton de Kock (87) flicked one to Dananjaya who too missed an easy chance. On both occasions, Kasun Rajitha was the unlucky bowler.
Despite Angelo Mathews getting his team together for a chat, their fielding woes didn’t end. Suranga Lakmal and Rajitha misfielded a couple of times as the ball rocketed to the fence. By then, Amla and de Kock were in good nick, playing a string of shots on both sides of the wicket. Amla swept and flicked while de Kock drove, flicked and occasionally, chipped down the track to reach his fifty in just 43 balls.
Sri Lanka desperately needed a wicket and Dananjaya provided the breakthrough by removing Amla. It was a juicy full toss but Amla could only chip it back to the bowler. Dananjaya then sent Aiden Markram, who has looked woefully out of form, back to the hut. Faf du Plessis (49), the skipper, and de Kock, however, put South Africa in a cruise mode with a 53-run stand for the third wicket before the latter became Rajitha’s maiden scalp.
Dananjaya followed it up by prising out du Plessis and David Miller nibbled at one in the channel outside the off stump. JP Duminy, too, was dismissed, hitting one straight to cover to cause a few flutters in the visiting camp. Andile Phehlukwayo and Willem Mulder put paid to Sri Lanka’s hopes of pulling off a heist with an undefeated stand of 15 for the seventh wicket. It could have got tense for the visitors, but a loud appeal for LBW against Mulder was turned down. HawkEye showed Three Reds but Sri Lanka by then had used up their review.
After another disappointing show, the hosts have a lot of soul-searching to do ahead of the crucial third ODI in Pallekele on August 5. On the other hand, South Africa would look to seal the rubber.
Sri Lanka with a sniff…
A couple of quick strikes have given Sri Lanka a sniff. Faf du Plessis was out to a soft dismissal, as Dananjaya grabbed his second caught and bowled chance. Miller then pushed at one that left him on the angle and was dislodged. 198 for 5 now.
De Kock misses out on ton
De Kock looked set for his 14th ODI century before he was snuffed out by Rajitha – his maiden ODI scalp. It was a half volley on leg stump, waiting to be smashed but de Kock found the fielder in the deep to perfection. Sri Lanka, meanwhile, need a few more wickets to stay in the game.
Markram’s misery vs spin
Markram’s misery against spin continues. He initially wanted to skip down the track but yet again (on this tour) he was too early into the shot. Dananjaya spotted it and shortened his length. Eventually, Markram decided to stay back and eked out an edge and was pouched by Kusal. It has been that kind of a tour for Markram where he hasn’t been able to judge the length quickly.
Finally a wicket!
After sitters were dropped followed by a slew of misfields, Dananjaya grabbed a catch off his bowling to send Amla back to the hut. It was a juicy full toss and Amla chipped it back to the bowler. Not the kind of delivery that Dananjaya would have expected to get a scalp but the hosts desperately needed that wicket. Sri Lanka’s bowling and fielding have been way below par so far!