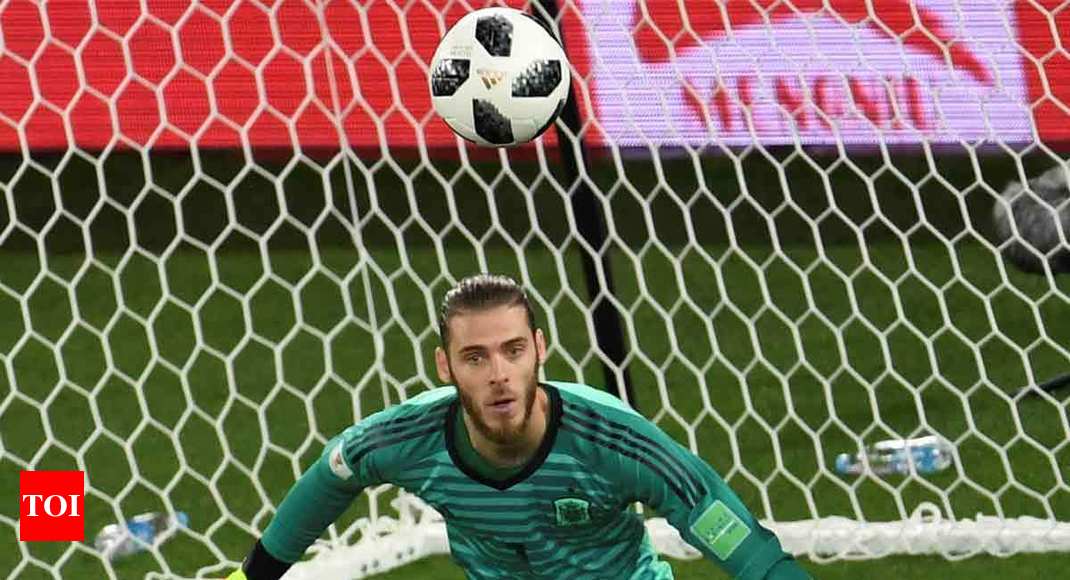 KAZAN: David de Gea came under fire the moment he slipped on Cristiano Ronaldo’s innocuous shot in Spain’s opening game against Portugal in Sochi. It was early days in the tournament but the Spanish goalkeeper’s error suggested that reputations of many more stars were on the line in Russia.

The ‘opening’ match, an Iberian derby, also poked holes in the theory that Spain simply needed to turn up to be champions. Highly inconsistent in defence and not as sharp in attack as was being predicted, La Roja were unsettled by coach Julen Lopetegui’s ouster just two days before the Portugal game. Fernando Hierro was hastily made the guide of Spain’s campaign. And de Gea added to the confusion.

The Manchester United goalkeeper is known to pull off heart-stopping saves to keep Jose Mourinho’s expensive but underperforming side close to the top of the table. The not quite-so venomous left footer by Ronaldo, taken from outside the box, was nicely covered by De Gea. Somehow, the ball hit his knee and went through him. Clouds of criticism have weighed heavy on the Spanish shot-stopper since.

Spain managed to scrape through to the knockout stage after some last-minute drama and a wild 2-2 draw against Morocco, where De Gea made a one-on-one save but detractors are not convinced. During their successful 2010 World Cup campaign, Spain had not conceded any in the knockout rounds. De Gea has picked the ball out of the net on five occasions in the group stage itself.

The disastrous lack of communication between Sergio Ramos and Andres Iniesta in the middle of the pitch that led to Morocco’s first goal, was conveniently forgotten.

On the eve of facing an energetic Russia in their first knockout game in Moscow, Hierro had to come to De Gea’s rescue. When asked about the chances of Pepe Reina or Kepa Arrizabalaga’s chances against Russia, Hierro replied, “De Gea will start.” He added, “I’m not suffering from anything that other coaches haven’t gone through: Clemente, Camacho, Vicente del Bosque… the reality of the situation is that now football is very different and there’s always debate.”

Even Bayern Munich midfielder Thiago Alcantara feels De Gea should not be benched. Thiago told the Spanish press, “Try and assess what a great goalkeeper he is. He’s the best goalkeeper in the Premier League, he works like a f***ing animal and our confidence in David is huge.”

The former Barcelona man also said that the side cannot play with a sense of fear for the rest of the tournament. “We can’t live with a fear of failing. We always want to go out and play with speed and have possession of the ball. It is complicated when, due to small errors, the opponent takes the lead and then sits back and defends. But you must avoid playing with fear and uncertainty, while knowing how you must play against your opponent,” he added.

He is relishing the next challenge from hosts Russia. “We don’t look at the draw and worry about whether we are on side A or side B. Playing well is all that matters,” continued the midfielder. Strikers Denis Cheryshev and Artem Dzyuba have shown that they can ask very uncomfortable questions as the Manchester United goalkeeper is about to find out.

It is not only De Gea’s error that is drawing fire from home. It is his lack of saves that is standing out.