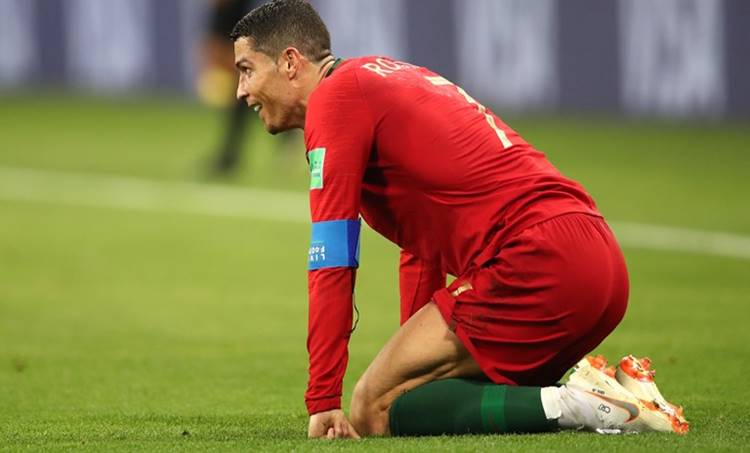 One could almost feel the Mordovia Arena tilt toward the Insar River which gently flows past it as tens of thousands of Iranians cried out in anticipation of a miracle that never came.

Mehdi Taremi’s shot deep into injury time did hit the net, but from the wrong side. A double knockout blow for the ages narrowly averted, the European champions survived.

The late drama that followed referee Enrique Caceres’ over-generous penalty decision and substitute Karim Ansarifard’s expertly taken equaliser saw plenty of players fall to the ground at the final whistle — the ones wearing white in dejection, the ones in red in relief.

All that mattered to Fernando Santo’s men was that their World Cup continues, whereas that of a very impressive Iran team was over. Over the next couple of days, however, regret might become the most prominent emotion in the camp of the Selecao. Having started brightly and taken a lead through one of the goals of the World Cups — yes: plural — Portugal stuttered where they should have cruised. The upshot was a second place behind a shaky Spain, a last-16 tie vs. Uruguay instead of Russia, and a much more arduous route beyond that.

“We have our weapons and we are trying to win,” Santos said, arguing that it didn’t make too much of a difference whether “the hosts and their huge support” were the opposition or “high-quality Uruguay.”

That line hinted at fears that Russia’s home advantage could still come into play, but there is no doubt that the South Americans, by virtue of their firepower, will make for a bigger obstacle.

On the evidence of Monday night, Portugal remain a tricky team to properly evaluate. They were at their best early on, freed from defensive rigour, when first-XI debutants Andre Silva and Ricardo Quaresma transferred the usual 4-5-1 into a much more potent 4-3-3. Ronaldo seemed to enjoy his attacking teammates providing a foil for him, threatening Iran’s goal with customary runs from the inside left.

But then something odd happened. As Iran stood firm, the extra forwards at Ronaldo’s disposal somehow left him diminished. He took up deeper positions, collected the ball in midfield and attempted hopeful shots from distance. The longer the game went on, the less he was involved.

The Real Madrid ace switched flanks with Quaresma 38 minutes in for a few moments, but the experiment was quickly abandoned. Joao Mario then stepped up a few metres to change Portugal’s shape into 4-4-2, but that too didn’t work. It took an individual stroke of genius from Quaresma to break the Islamic Republic’s resistance a few seconds from half-time.

The goal only galvanised Iran. A series of defensive substitutions by Santos reinstalled Portugal’s customary, cautious setup at this World Cup to stem the tide, but they never seemed fully in control. When Ronaldo spurned a chance to double the lead from the penalty spot — no Portuguese player had a missed a penalty in a World Cup before, shootouts excluded — Iran’s resolve grew further. Their anger did, too.

Carlos Queiroz turned away in disgust as the increasingly nervous referee cautioned Ronaldo for a stray elbow against Morteza Pouraliganji after looking at the video screen.

To the former mentor turned enemy of Portugal’s star player, the decision smacked of favouritism.

“In the rules, the elbow is a red card, it does not matter if it’s Lionel Messi or Ronaldo,” he said. “VAR is an obscure system that costs a fortune and nobody takes responsibility.”

Ronaldo’s yellow card might well come to hurt further down the road, if he were to get suspended. His penalty miss certainly proved costly almost immediately. Iran’s late equaliser — deserved on the balance of play if not for the VAR-assisted penalty call, which was wrong — plunged Portugal into the more star-studded section of the draw.

They will have to do it the hard way now but, more worryingly than that, Quaresma’s one-in-a-million strike only underlined how dependent the team remain on Cristiano coming up with the goods.

In Saransk, they just about survived an off night by their talisman. It’s highly doubtful they’ll be able to do so for a second time, against better opposition.