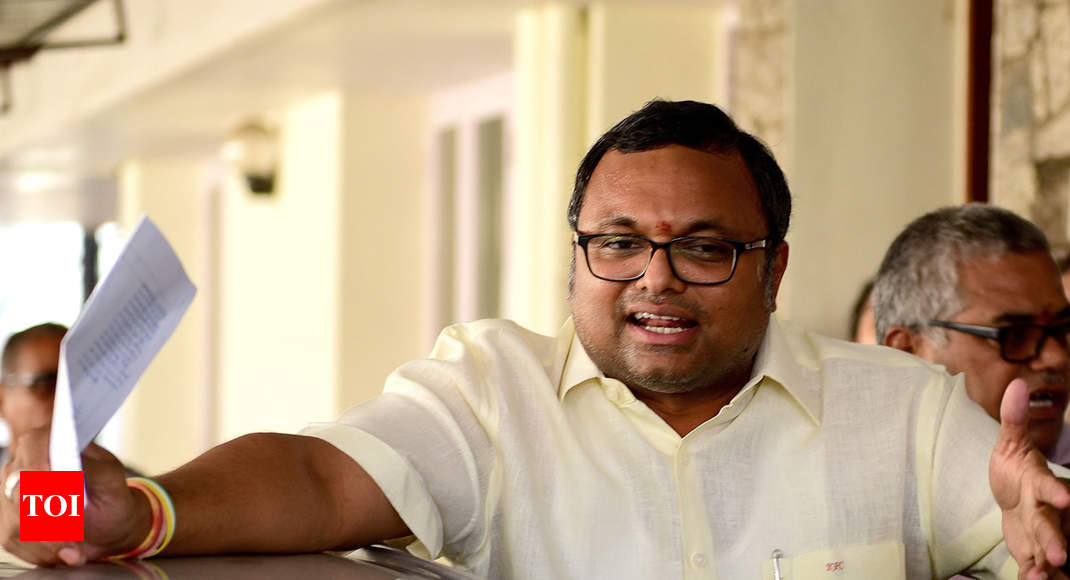 NEW DELHI: A Delhi court on Friday allowed the Enforcement Directorate to place on record voluminous documents running into around 3,600 pages in support of its charge sheet against Karti Chidambaram, the son of former Union Minister P Chidambaram, in the Aircel-Maxis money laundering case.

Special Judge OP Saini posted the matter for July 31 when it will decide on whether to take cognisance of the charge sheet against Karti Chidambaram.

After the application moved by special public prosecutors — senior advocate Sonia Mathur and advocates NK Matta and Nitesh Rana – was allowed, the agency filed the documents.

The ED has also mentioned the name of former union minister Chidambaram at various places in the charge sheet. However, he has not been arrayed as an accused in the probe report.

Apart from Karti Chidambaram, the agency has also named Advantage Strategic Consultancies Private Limited and its directors Padma Bhaskararamana and Ravi Viswanathan, and Chess Management Services Pvt. Ltd. and its director Annamalai Palaniappa in the charge sheet under section 4 (punishment for money laundering) of the Prevention of Money Laundering Act.

According to sources, the agency in its charge sheet, filed through advocate A R Aditya, mentioned that the former union minister’s son has been linked with various individuals and companies involved in the Foreign Investment Promotion Board (FIPB) approval given to the Aircel-Maxis deal.

It also alleged that Karti Chidambaram was in the process of alienating the property involved in the money laundering in order to frustrate the proceedings under the Prevention of Money Laundering Act (PMLA).

The agency told the court that it might file a supplementary charge sheet in the case.

The court has already granted interim protection from arrest till July 10 to Karti Chidambaram in two cases filed by the CBI and the ED in 2011 and 2012, respectively in the Aircel-Maxis matter arising out of the 2G spectrum allocation scam cases.

The matter pertains to grant of FIPB clearance to M/s Global Communication Holding Services Ltd for investment in Aircel.