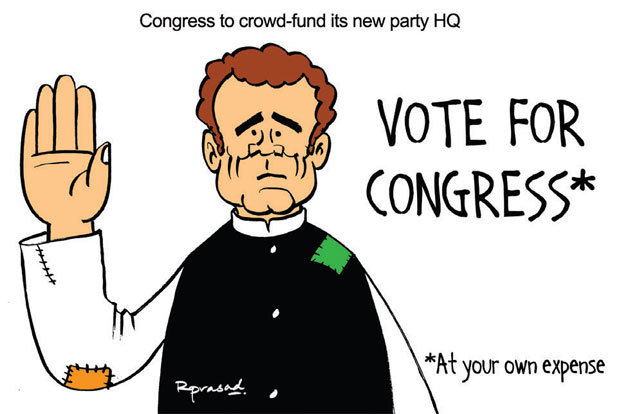 NEW DELHI: Facing a threat of eviction in October from its 24 Akbar Road party headquarters, Congress is planning to crowd-fund its new hi-tech office at Rouse Avenue in the capital. Congress is likely to launch an online campaign to ask people to donate so that the party is able to complete its headquarters.
According to sources, the idea for crowdfunding came from Congress president Rahul Gandhi’s former aide Kanishk Singh. However, before opening its headquarters project, the party has tested waters with its project of collecting funds for a super-speciality hospital in Rourkela, which was promised by PM Narendra Modi. The party came out in support of 30-year-old Muktikanta Biswal who had walked 1,500 kilometres from Odisha to Delhi to meet Modi to remind him about his 3-year-old hospital promise.

The party collected Rs 20 lakh through crowd-funding. The second experiment, ‘Save Democracy’ campaign, came in Karnataka when it crowd-funded the election campaign of a candidate. Party insiders said that this move is also an attempt by the Congress to make a distinction between itself and the ruling BJP.

“The jibe of Congress president ‘suit-boot ki sarkar’ had a great reverberation with the people. When we openly say that ‘We do not have the money, please help us’, we are striking a chord with the people directly that the party is not corrupt,” said a Congress functionary. The party’s new building is still incomplete. There are, however, two views within the party over crowd-funding campaign.

A Congress leader told ET, “Seeking funds is really an admission that our finances are not in order. How wise is that? At the same time, it is also a very Left-of-Centre approach to seek funding like this.” as directorate of estates had served notices cancelling the allotment of all four properties leased out to Congress —24 Akbar Road, 26 Akbar Road which houses Seva Dal office, 5 Raisina Road which has Indian Youth Congress office and CII/109 Chanakyapuri — in January 2015.

According to the rules of allotment of government accommodation from the general pool to national and state parties, a party is given three years to construct its own party office, after which the building has to be vacated.

Congress was allotted land in June 2010 for building a party office on 9-A Rouse Avenue. As per the policy, the party was required to vacate the four bungalows leased to it by June 2013. Since Congress’ building plan for Rouse Avenue headquarters had not been sanctioned, the party had sought an extension of lease.