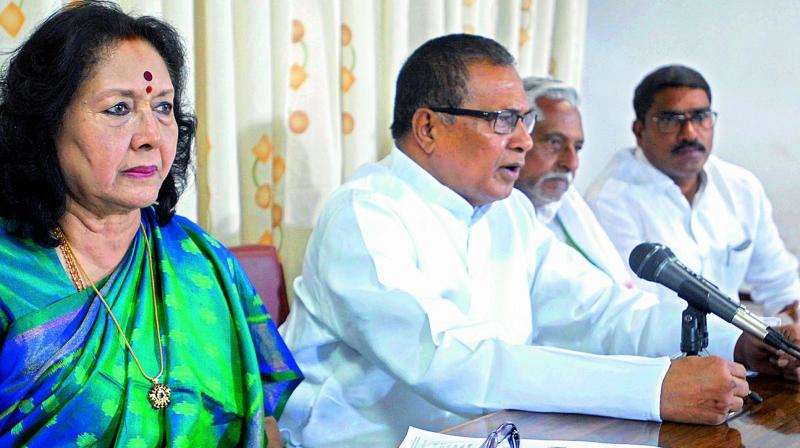 Hyderabad: Several Congress leaders from Telangana, including K. Jana Reddy, the Leader of the Opposition in the TS Assembly, came down heavily on IT minister K.T. Rama Rao for calling the Congress a “loafer party”.

Addressing the media on Friday, Mr Jana Reddy said, “As the leader of the Congress Legislature Party (CLP), I am condemning the language used by minister KTR.”

He said that the minister’s comments were evidence of political ego and decay.

Mr Jana Reddy said that the use of “shabby” language had become a matter of habit for the leaders of the TRS.

He said that just as Mr Rama Rao had called the Congress a “loafer party”, the TRS should be called a broker party, as brokering was what the leaders of the party indulged in.

He added that the minister had made those comments just to get some publicity and media attention.

The leader of the CLP said the failure to give the Congress, which granted Telangana state, even a minimal level of respect was hurting the people of Telangana.

He also criticised Mr Rama Rao for his comments regarding AICC president Rahul Gandhi. He said the people were waiting for an opportunity to teach Mr Rama Rao a lesson. He said Rahul Gandhi is the leader of a party of 130 crore people and that he had sacrificed the Prime Minister’s post, and so Mr Rama Rao had no right to criticise him.

Mr Jana Reddy also expressed confidence that the Congress would come to power after the 2019 elections.

Senior leader and MLA J. Geeta Reddy, the chairperson of the Public Accounts Comm-ittee, asked Mr Rama Rao whether it was pro-per for an educated person to use such langu-age. She asked whether that was what he had learnt after travelling to so many countries.

Recalling that Chief Minister K. Chandrase-khar Rao and his family had touched Sonia Gandhi’s feet and called her “Telangana deva-tha”, she said Mr Rama Rao had no right to criticise Rahul Gandhi.

Senior leader and MLA T. Jeevan Reddy and others also condemned the minister for the language used by him to criticise the Congress.