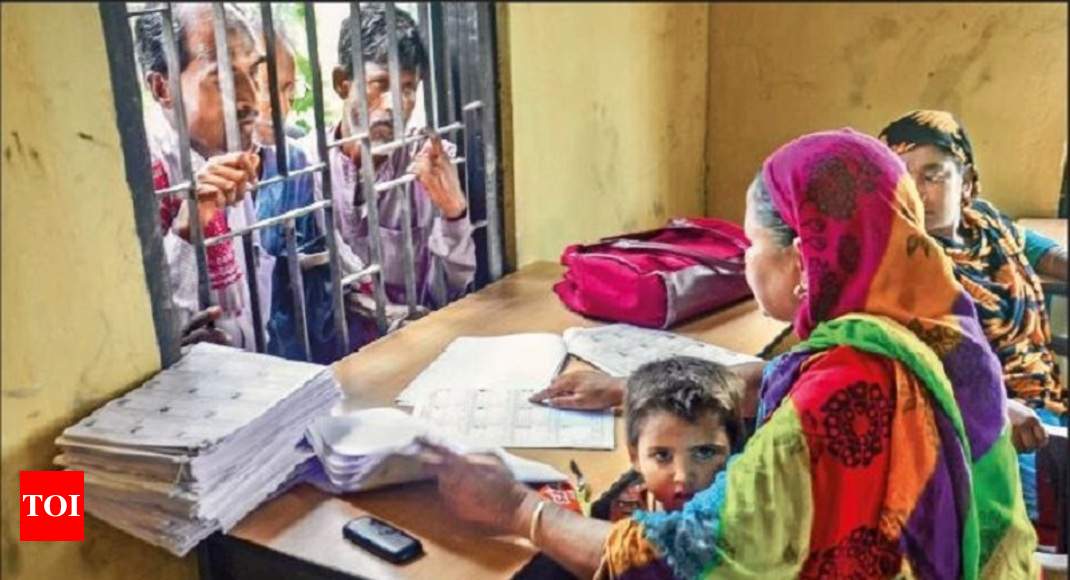 Publication of the draft National Register of Citizens (NRC) in Assam made Mamata Banerjee warn of “civil war” if such an exercise was repeated in West Bengal. Banerjee whipped out the regional card and issued a veiled threat by asking what would happen if one state did not want residents of another state in its territory.

Congress and BSP too have criticised the NRC for different reasons. But what did the NRC do, except attempting to find out who were Indians and who had migrated illegally. It was the influx of illegal migrants which required updating of the NRC. We will first talk about the problem of illegal migrants and the NRC later.

Chronic inaction since 1950 stalled updating of the NRC and identification of illegal migrants. History is witness to Congress governments closing their eyes to massive influx of illegal migrants into Assam, threatening to reduce Assamese to the status of minority.

Parliament acknowledged the problem in 1950 and enacted the Immigrants (Expulsion from Assam) Act as it felt “during the last few months, a serious situation had arisen from immigration of a very large number of East Bengal (now Bangladesh) residents into Assam… disturbing the economy of the province, besides giving rise to a serious law and order problem”. The Centre was empowered to expel illegal migrants, but without any tangible action, the problem was allowed to fester.

Taking a leaf out of this booklet, Zulfikar Ali Bhutto’s 1967 book ‘Myth of Independence’ said, “It would be wrong that Kashmir is the only dispute that divides India and Pakistan, though undoubtedly the most significant… One at least is nearly as important as Kashmir dispute, that of Assam and some districts of India adjacent to East Pakistan (now Bangladesh).”

The Indo-Pak war of 1971 and birth of Bangladesh saw Assam get choked with unmanageable numbers of Bangladeshi migrants. Successive Congress governments turned a blind eye to this massive influx. The state’s students did not.

Between 1971 and 1991, Assam’s Hindu population grew by 41% but that of Muslims registered a 77% increase. Massive students’ agitation for six years forced the Rajiv Gandhi government to sign the Assam Accord on August 15, 1985, promising to detect and deport those had who illegally entered Assam after 1971.

The accord was a dead document from its birth. For, in 1983, the Congress government enacted Illegal Migrant (Determination by Tribunals) Act that made detection impossible. Till August 2003, inquiries against 3,86,249 persons were initiated, a minuscule 11,636 were declared illegal migrants and only 1,517 expelled. Congress now claims that UPA-1 and UPA-2 governments deported more illegal migrants between 2004-2014 than any other government.

In 1998, Assam governor Lt Gen S K Sinha sent a report to the Centre highlighting how Dhubri, Goalpara, Barpeta and Hailakandi had become Muslim majority districts and Nagaon, Karimganj and Morigaon districts would soon become so because of unabated illegal influx of Bangladeshi migrants.

The governor had also warned, “There is a tendency to view illegal migration into Assam as a regional matter affecting only the people of Assam. It’s more dangerous dimensions of greatly undermining our national security is ignored. Long cherished design of Greater East Pakistan/Bangladesh, making inroads into strategic land link of Assam with the rest of the country, can lead to severing the entire land mass of the north-east, with all its rich resources from the rest of the country. They will have disastrous strategic and economic consequences.” Did any ruling party at the Centre view the report with the seriousness it deserved?

Sinha’s report said illegal migration, which was the core issue behind the students’ agitation, threatened to reduce Assamese people to a minority in their own state and a prime contributing factor behind increased insurgency. “Yet, we have not made much tangible progress in dealing with this all important issue,” he had said, hinting at IMDT Act’s ineffectiveness to detect illegal migrants.

Sarbananda Sonowal moved the Supreme Court in 2000 and challenged validity of IMDT Act. In August 2000, Prafulla Mahanta’s AGP government told the SC in an affidavit that the Centre was not heeding its repeated requests for repeal of IMDT Act because of its ineffectiveness.

In August 2001, the Tarun Gogoi government sought to withdraw the Mahanta government’s stand and vigorously defended IMDT Act — first through Kapil Sibal and later through K K Venugopal — saying Congress was committed to oppose any move to repeal the Act. It sought dismissal of Sonowal’s petition.

The SC quashed IMDT Act in 2005 and termed it “the biggest hurdle and the main impediment or barrier in identification and deportation of illegal migrants”. It ordered their detection through the Foreigners Tribunal, saying it had proved more effective in dealing with illegal migrants in neighbouring N-E states.

The SC had said, “There can be no manner of doubt that the state of Assam is facing ‘external aggression and internal disturbances’ on account of largescale illegal migration of Bangladeshi nationals. It, therefore, becomes the duty of the Union of India to take all measures for protection of the state of Assam from such external aggression and internal disturbances as enjoined in Article 355 of the Constitution.”

The SC ordered transfer of all cases before IMDT to the Foreigners Tribunal. But the UPA government was in no mood to obey the SC verdict. In February 2006, it passed the ‘Foreigners (Tribunal) Amendment Order’ making detection of illegal migrants through Foreigners Tribunals inapplicable to Assam.

Sonowal again knocked at the SC’s doors. In December 2006, the SC quashed the order and rapped the UPA government on the knuckles. It said instead of strictly implementing the 2005 judgment, the Centre “lacked will” to ensure that “illegal migrants are sent out of the country”. Yet again, the SC had to remind the UPA government of its duty under Article 355 to protect the integrity of the nation.

In 2009, another PIL by NGO ‘Assam Public Works’ in the SC sought updating of the NRC. Hearing in the PIL picked up only after a bench headed by Justice Ranjan Gogoi, of which Justice R F Nariman later became a part, zealously took up the issue from August 4, 2014. The bench bound the authorities to the deadlines for stage-wise preparation of NRC.

On November 30 last year, when it was about to fix a deadline for draft NRC publication, the BJP-led government through attorney general K K Venugopal, who as a senior advocate and appearing for Tarun Gogoi government had stoutly defended IMDT Act, pleaded that it was the executive’s job to set deadline for draft NRC publication and the SC should not encroach into its domain.

The SC discarded the argument and said it was too late in the day to raise the argument about judiciary encroaching into the executive’s domain when in the past three years of monitoring, the Centre had never raised objection. Last week, it said those 40.07 lakh persons not figuring in the draft NRC would get a fair chance to seek inclusion and that the entire process would soon be taken to its logical conclusion, that is the final NRC.

Will it serve the purpose? Will it help the Assamese rediscover their emotional connect with their rich cultural heritage? No one knows. But politicians who warn of ‘civil war’ exhibit their ignorance about mental trauma undergone by the Assamese people because of the worrisome ground situation, which was allowed to fester and become an incurable psychological and physical wound.