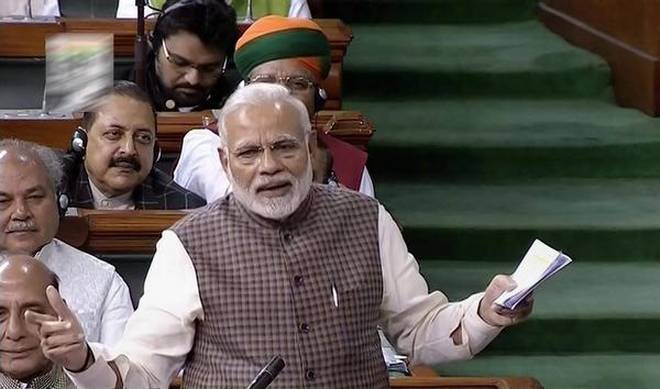 Prime Minister Narendra Modi tore into the Congress in the Lok Sabha on Wednesday, accusing it of “partitioning” the country and also of “scuttling democracy” during the past 70 years.

His attack included barbs on Congress president Rahul Gandhi and former Prime Minister Rajiv Gandhi, who he accused of being undemocratic.

And at a time when the Telugu Desam Party and the YSR Congress Party have been protesting against Andhra Pradesh purportedly being given a raw deal by the Union Budget, Mr. Modi also accused the Congress of having been unfair to the State.

His attack on the Opposition party — interspersed with statistical claims of his having achieved much more than what was done during UPA days – came amid relentless slogan-shouting by Congress MPs, who also waved placards regarding Andhra Pradesh and the Rafale deal in the Well of the House.

“When you partitioned India, you sowed such poison that not a day has passed in 70 years when 125 crore Indians don’t pay for it,” Mr. Modi said.

He then accused the Congress of having been undemocratic, and saying it was no one to offer sermons on democracy.

Mr. Modi said that 15 Congress Committees wanted Sardar Patel as their leader and three were undecided, and yet Nehru was made Prime Minister.

He asserted that the Kashmir problem would not have been there had Mr. Patel been the first Prime Minister.

“More than 90 times was Article 356 used to dismiss State governments,” he added.

Mr. Modi also accused the Congress of being unjust to Andhra Pradesh.

He said the Congress had picked N. Sanjeeva Reddy as its Presidential candidate but he was given short shrift and another candidate was supported. The reference was to the Presidential election of 1969 when Indira Gandhi backed V.V. Giri as President against Mr. Reddy during her fight with the party clique called the Syndicate and finally gave a call for a vote of conscience, leading to Mr. Reddy losing the election.

Mr. Modi also attacked the late Rajiv Gandhi: “Rajiv Gandhi landed at the Hyderabad airport. Your Chief Minister belonging to the Scheduled Caste, T. Anjaiah, was present. He (Rajiv Gandhi) openly insulted him.” “The TDP was born out of the fire of that insult,” Mr. Modi said.

This comes at a time when NDA-ally TDP is up in arms against the Centre over no special package for the State in the Union Budget.

He said that while the Vajpayee government had created new States smoothly, the UPA had an eye on the polls when it created Telangana – which, Mr. Modi added, the BJP had also favoured – in a hurried way, leaving behind problems.

Significantly, TDP MPs were continuing their protest in the Well of the House when the Prime Minister entered the Lok Sabha just before his speech. But as the treasury benches persuaded them to go to their seats to listen to Mr. Modi, Congress members heckled them for withdrawing, with Mallikarjuna Kharge complaining that while they had tried to disrupt his speech, they were now doing just the opposite for Mr. Modi.

Congress members then assembled in the Well of the House to raise slogans in favour of Andhra Pradesh’s demands, in a bid to score points and also drown the PM’s voice.

Mr. Modi also made specific mention of Mr. Rahul Gandhi publicly tearing a Cabinet decision — a reference to the Ordinance, supposed to offer relief to convicted legislators from impending disqualification, being dramatically torn by him in 2013 — to accuse him of being undemocratic.

Asserting that the Congress had full power after independence and could have used it to make India a developed country, Mr. Modi said they frittered away the opportunity praising “one family”.

He rued that even countries that became independent after India had become more developed than it.

Mr. Modi also reeled out statistics claiming much greater success in road and railway construction during his term than under the UPA.

As for the mounting non-performing assets of banks, he accused the previous government of facilitating loans for its favourites and middle men, saying the NDA had inherited the fruits of the UPA’s “sins”.

Mr. Modi also patted his government for “renegotiating” gas contracts with Qatar and Australia to bring the prices down.