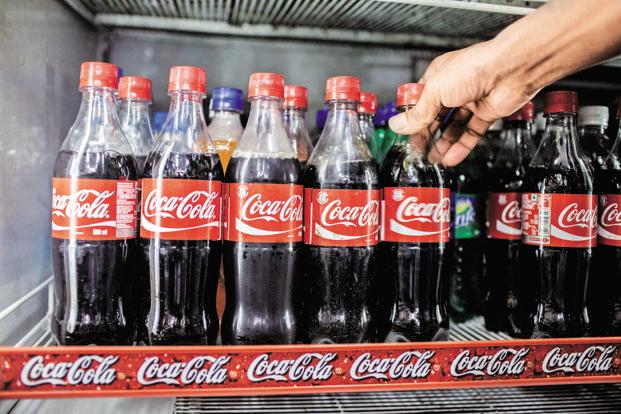 Coca-Cola India is looking to diversify its portfolio in India. Photo: Bloomberg

Previously, Radhakrishnan was heading a worldwide initiative at Nestle India Ltd to optimise marketing efficiencies, besides building the foundation for the company e-commerce competencies, according to a statement issued by Coca-Cola India on Monday. During his career spanning over two decades, Radhakrishnan also worked with Britannia Industries Ltd, Marico Ltd and Airtel Ltd in a variety of roles across sales, marketing and business functions.

Radhakrishnan will take charge of the company’s strategic initiatives to accelerate the pace of innovation and assess opportunities to offer a broader portfolio of beverages to consumers.

Bajoria, a Coca-Cola veteran, will work towards making south west Asia a growth engine for the company, it said in its statement.

“We believe there are significant opportunities that lie ahead of us to grow our portfolio. These changes will address developing business needs and pave the way to develop a stronger portfolio for the future,” T Krishnakumar, president, Coca-Cola India and south west Asia, said in the statement.

The development comes at a time when the local unit of the American beverages company has been trying to make fresh attempts to crack the Indian dairy market with a new set of products, after an unsuccessful attempt with Vio, a ready-to-drink packaged flavoured milk brand, launched in 2016.

Coca-Cola India, which has been selling aerated drinks such as Coca-Cola and Thumps Up for more than two decades, and lately fruit-based aerated and non-aerated beverages, will re-enter India’s white gold market, primarily dominated by cooperatives, with three different sets of products — chocolate-based drinks, frozen fruit desserts, fusion of milk and fruits — during the third quarter of the current fiscal, with an eye on the festive season.

“We have learnt some lessons, reworked on the products to respond to consumer demand and tastes. We will re-enter the segment with relaunch Vio next quarter,” Krishnakumar told Mint in an interview earlier this month.

During the third quarter of the current fiscal, Coca-Cola will launch a chocolate-flavoured ready-to-drink dairy product that would have the feel of malt-based drinks under Vio. The product will be sold in 180-ml Tetrapak priced at Rs 25.

“Vio, as a brand, never had a problem. But we needed to rework the product to respond to consumers’ needs,” Krishnakumar said. There will be more flavours of the same product. Vio earlier had four variants of flavoured milk.

Besides relaunching Vio, Coca-Cola will also introduce a smoothie – a fusion of milk and fruits – under its fruit juice brand Minute Maid next quarter. The product is likely to be priced around Rs 30 for a 250-ml pack. “We are also planning to make Minute Maid Perfect Fruit available nationwide,” Krishnakumar said. The company introduced Perfect Fruit brand late last year to sell frozen fruit desserts, but only in selective areas in Bangalore.

Coca-Cola is re-entering the dairy market at a time when domestic companies with big retail networks such as ITC Ltd and Tata Global Beverages Ltd are also readying to tap the value-added dairy segment. Biscuit maker Britannia Industries Ltd has ramped up its dairy investments in the past couple of years.

Krishnakumar also said the company was hopeful of maintaining its double-digit growth in future.