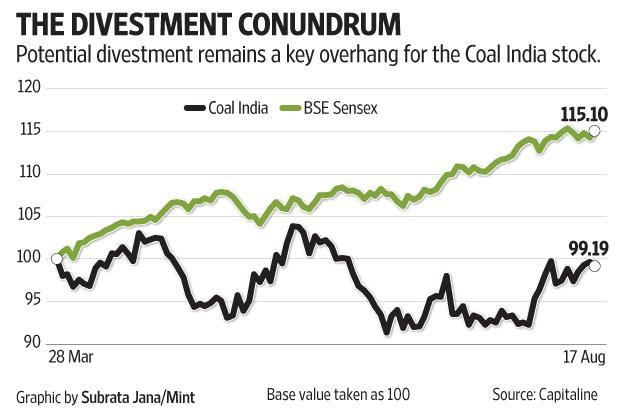 After a reasonably good start to the first quarter, Coal India Ltd’s outlook for the rest of the fiscal year also looks bright. Demand from the power sector is expected to be strong. Coal stocks at power plants are low. Analysts believe the adverse impact of wage provision and coal grade slippages have also been factored in. Consequently, Coal India is set to benefit from better volume and price increases going ahead.

The upshot: total operating revenue increased by 27% to ₹ 24,261 crore. Costs were under control leading to as much as 63% increase in the reported earnings before interest, tax, depreciation and amortization, or Ebitda.

Coal India shares have underperformed the benchmark Sensex so far this financial year. Despite the 2% increase since the coal producer announced its Q1 results, the stock has marginally declined in FY19. On the other hand, the S&P BSE Sensex has increased by 15%. News reports that the government is likely to sell a 5-10% stake in the company is an overhang on the stock.

Valuations are hardly demanding with Coal India shares trading at 10.6 times estimated earnings for this financial year, according to Bloomberg data.

“We see Coal India generating free cash flow (post capex) of ₹ 13,000-13,500 crore over the next two years,” wrote analysts from Edelweiss Securities in a report on 13 August.

At the upper end, it is equal to 7.7% of its latest market capitalization. According to Edelweiss, the free cash flow generation will enable the company to maintain dividend yield of over 5%, each, for the next two years.

While these factors bode well, clarity on the potential divestment could clear some uncertainty in the minds of investors.