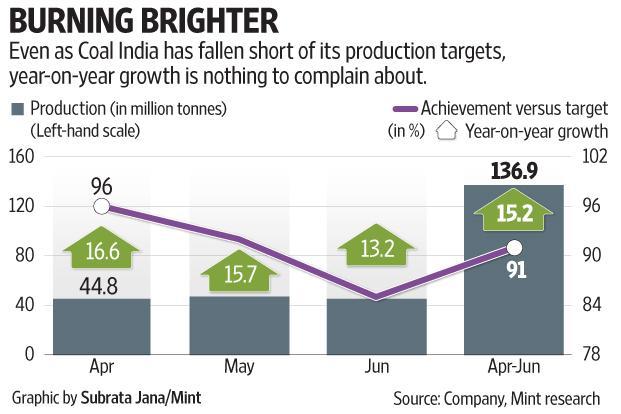 Even as Coal India has fallen short of its production targets, year-on-year growth is nothing to complain about.

But there’s no need to press the panic button yet. Over the years, the coal producer has earned a reputation for missing its guidance. For fiscal years 2018 and 2017, the company achieved 95% and 93%, respectively, of its production targets.

Coal India shares fell 1.3% on Monday, a day when the benchmark Sensex declined 0.5%.

What offers reasonable comfort here is the fact that production growth has begun on a strong footing in fiscal year 2019 (FY19), albeit helped by a favourable base effect. Production in June increased 13% year-on-year and for the June quarter, output growth was 15%.

In fact, even dispatch (or sales volume) growth was satisfactory. The measure increased 8.6% in June and 11.7% for the June quarter. Low coal stocks (10 days stock as on 28 June for all India) at power plants help. The expected normative level of stock is 22 days.

In the near term, demand from the power sector is expected to soften a bit. Still, the company is likely to report decent earnings growth in FY19, supported by price hikes taken in January.

While FY18 profit growth has been flattish due to wage provisioning, JM Financial Institutional Securities Ltd estimates high growth in FY19 profit (about 20%). This is despite factoring only 7% offtake growth (versus the management’s target of 8.6%) and lower e-auction prices.

“With all the negatives of wage provisioning and degradation already factored in FY18 earnings, the benefit of growing volumes and price hike would reflect in FY19/20,” pointed out JM Financial analysts in the March quarter results review report on 31 May.

However, the Coal India stock is down. So far in FY19, the stock has dropped by 11% from the closing high on 31 May. News reports say that the government is considering offloading some stake in Coal India after it received no bids for the Air India divestment. This is one factor that could have weighed on the sentiment; the government owns a 78.55% stake in the company.

The Coal India stock trades at about 10 times estimated earnings for this year, based on Bloomberg data. In the near term, clarity on a potential divestment, if it is happening, would prove helpful.