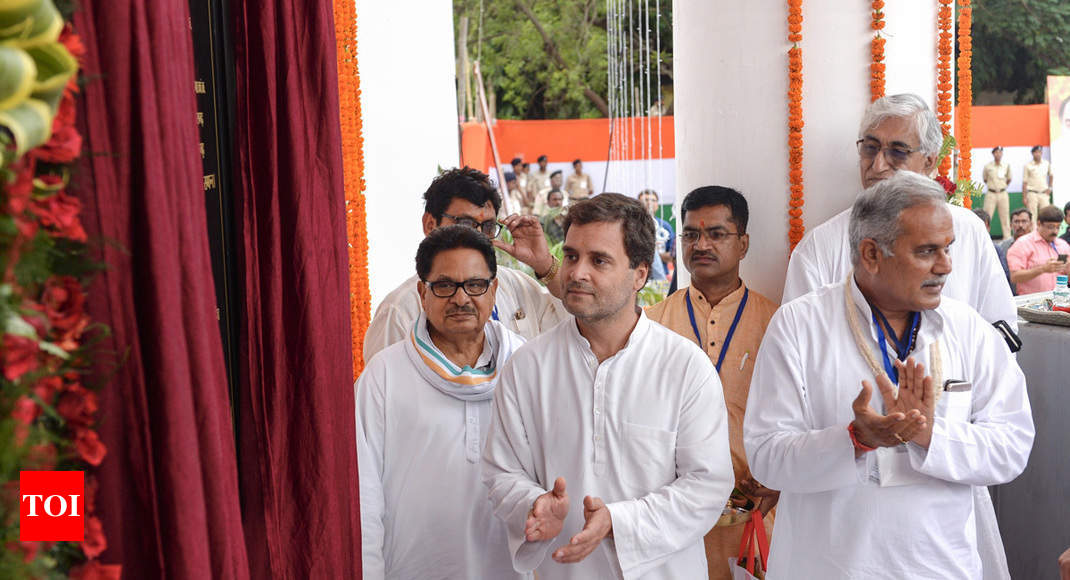 NEW DELHI: Like goddess Sita chose Lord Ram, the chief minister’s face of the Congress will be elected through ‘swayamvar’ after the Assembly elections, Chhattisgarh Leader of Opposition T S Singh Deo has said.

He said the Congress party, which has been out of power in the state for the past 15 years, will form the government in the state in the same way lord Ram ended ‘vanvaas’ (exile) after 14 long years.

In an interview with PTI, Singh Deo said his party was open to alliance with like-minded opposition parties to ensure the alliance wins and the ruling BJP is out of the power.

To a question whether or not the Congress will project somebody as its chief ministerial candidate ahead of the polls due later this year, he made an analogy from Hindu epic Ramayana and said lord Ram did not get married straight on.

“He had the Swayamvar. There are many good people in the party who have done very good work. So there will be Swayamvar after the polls’ victory,” the senior Congress leader said.

He said Raman Singh was not declared the chief ministerial candidate in 2003.

“Where was Yogi Adityanath face in UP election? They (BJP) did not have any face. They also did Swayamvar. Yahan bhi ho jayega (It will be here too),” Singh Deo said.

He said it is not like that people are not seeing who all are the Congress leaders.

“It is not like that it is a sort of hidden thing. There are many good leaders in Congress. A chief minister’s face by itself is not guarantee for anything. In Himachal Pradesh, the BJP lost the seat of designated CM candidate,” Singh Deo, heir of royal family of Sarguja, said.

Citing instances of corruption in the BJP-ruled government in the state, he said the Congress will definitely win the upcoming elections.

“Ram came back (to power) after 14 years. I am sure we will end this Vanvaas,” he said, when asked about the outcome of the polls and his party prospects.

Raman Singh, who is the longest serving chief minister of the BJP, is ruling Chhattisgarh since 2003.

Polls for 90 Assembly constituencies in Chhattisgarh are slated to be held in November-December this year.

When asked about the prospects of proposed alliance among the Congress and regional parties including the BSP, he said his party was open to such a possibility as it could be a win-win situation for the opposition.

“Things are not good in the country. Disagreements are fine. But if you cannot hold a particular view and you force them to tow a particular line with the use of state machinery then it is wrong.

“If you say anything against the government then you are anti-national. If this is going to be atmosphere in the country, it is not only tragic but something major needs to be done to check it,” Singh Deo said.

He said that is the reason why all senior leaders of like-minded party in the country are thinking of coming together.

“This coming together may also reflect in the upcoming elections in Chhattisgarh,” Singh Deo said.

He said alliance among opposition parties depends on various matters including that of seat sharing.

“Somebody says we cannot give or we cannot accept so many seats. Also we cannot make party cadre follow a line. We need to take them into confidence. The major exercise is to get cadres (of all the parties in case alliance happen) along. It is a new concept which has come out. But, we are talking to all like-minded parties except Ajit Jogi’s Janta Congress Chhattisgarh,” Singh Deo said.

He said Congress leaders are very happy in Chhattisgarh over Ajit Jogi’s exit as he was working as internal saboteur.

“While being in the Congress he was working against the Congress. ‘Ghar ka bhedi lanka dhaye’ wali jo kahawat hai (Internal saboteur causing harm). He was sabotaging and weakening the party from within. So it is good for Congress,” Singh Deo said.

He ruled out any chances of Jogi, who had for long been associated with the Congress, coming back to the party.

“No chances of his coming back,” Singh Deo asserted.

He said people in Chhattisgarh knew who has been helping Jogi while he was in the Congress.

“It is Raman Singh and the BJP that is helping Jogi. I have always been saying that Jogi is B team of the BJP,” the Congress leader said.

When asked about the impact of possible campaigning by Prime Minister Narendra Modi for the Assembly polls in Chhattisgarh, he said Modi will be much lesser factor than he was in 2013.

“The situation which existed in 2013 (Assembly elections) does not exist today. The graph has fallen considerably today,” Singh Deo said.