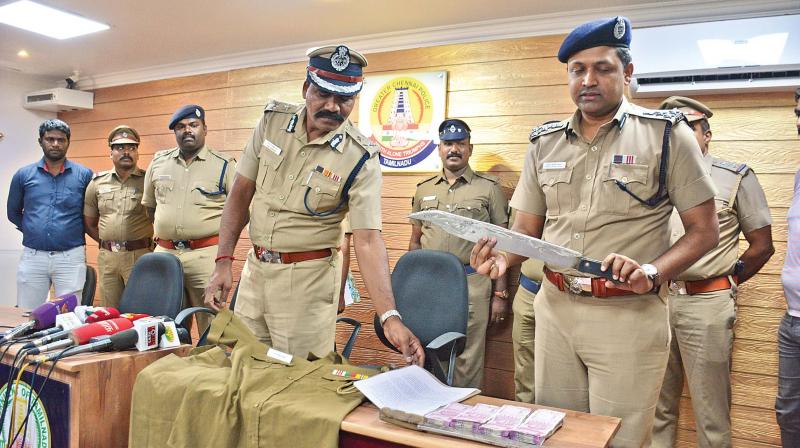 Chennai: Within 12 hours after a gang posing as police entered a house in Red Hills area and abducted a businessman, the city police, after a cinematic turn of events, nabbed the gang and its mastermind, on Tuesday.

According to police, Ganesan of Karikalan Nagar in Red Hills is into transport business. “On Monday night, when Ganesan was at his home along with his servant maid, some unknown persons, including a person clad in a police sub-inspector uniform entered the house and took him to a car in the guise of an inquiry,” H.M. Jayaram, additional commissioner of police (North), told reporters.

His maid informed relatives about this and they searched at nearby police stations in vain. Next day, Ganesan’s relative Ramachandran received a call from Ganesan’s mobile phone, demanding a ransom of Rs 25 lakh for his release, the additional commissioner said.

Meanwhile, the special team police noticed something fishy and followed Ramachandran. “Ramachandran had already handed over Rs 7 lakh and he was about to give remaining money to the abductors on Tuesday,” a source said.

The special team was led to Gummidipundi and they arrested Siva (39), Suman (39), who was in police uniform, Madhan Kumar (27), Ganesh (37), Ashok (35), Rajesh (21) and Sathiskumar (25) and rescued Ganesan. “Siva was the employee of Ganesan from his childhood and Ganesan trusted him. Suman approached Siva to inform Ganesan’s daily routines and gave Rs 1,000 daily  for nearly a week,” the police said.

During investigation, the police came to know that a notorious history-sheeter Vadakarai Sakthi (49), who was said to be ‘guru’ of late ‘gate’ Rajendiran, was the mastermind. The police hatched a plan to nab Vadakarai Sakthi, made Suman call his boss and inform that ransom had been taken.

The police boarded the same car, which was used to abduct Ganesan, and took Suman along with them. The team went to Vandalur, where Vadakarai Sakthi and his associate Kandan were waiting to receive the money. “On seeing the change in the body language of Suman, the duo tried to flee the spot, but police managed to arrest Sakthi at gunpoint. Kandan escaped the spot and a hunt has been launched,” the source said.