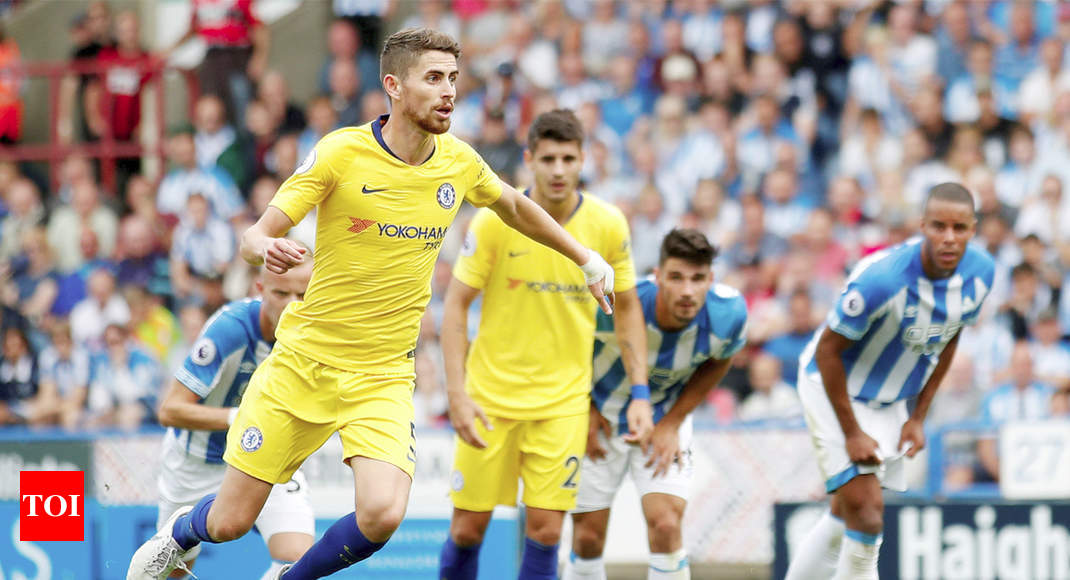 HUDDERSFIELD (United Kingdom): Chelsea manager Maurizio Sarri feared it will take some time for his side to get up to speed, but they proved too good for Huddersfield to start their Premier League campaign with a 3-0 win on Saturday.

Kepa Arrizabalaga replaced Thibaut Courtois for a world-record fee for a goalkeeper in a chaotic finish to the transfer window this week, while doubts over the futures of Eden Hazard and Willian have dogged Chelsea’s pre-season preparations.

Yet, goals from N’Golo Kante, Jorginho and Pedro Rodriguez at the John Smith’s Stadium papered over the cracks for now and raised expectations of what Chelsea could be capable of once Sarri imposes the attacking style he became known for in three years at Napoli.

Despite dominating possession, Sarri’s side looked uneasy early on and managed only two shots in the whole of the first half.

However, they scored from both, and never looked like letting their advantage slip.

The new head coach was helped by a returning World Cup winner and a new signing.

Kante, back on duty just 27 days after starting France’s win over Croatia in the World Cup final, scored the opener, thumping a volley into the ground and past goalkeeper Ben Hamer from a Willian cross.

Then Jorginho, who made the move from Napoli with Sarri, converted a disputed penalty.

Huddersfield felt hard done by because they believed that Christopher Schindler’s boot-to-boot contact with Marcos Alonso was accidental.

Jorginho, whose passing was near-faultless throughout, feinted during his run-up before rolling the ball in, leaving the goalkeeper flatfooted.

Hazard appeared for the final 15 minutes, as Real Madrid continue to circle, and gave a reminder as to just why he is so coveted.

The Belgian made a burst from his own half that drew Huddersfield defenders towards him before rolling a diagonal pass for Pedro to slot in the third.

Sarri has committed himself to doing things his own way at Chelsea, promising attractive football and scrapping Antonio Conte’s three-man defence in favour of the 4-3-3 set-up he employed at Napoli.

Quite how David Luiz will manage in a flat back four is open to debate. The Brazilian defender looked far from assured here and was fortunate to escape unpunished when Steve Mounie dipped a shot just over from an uncertain clearance.

Had Mounie levelled with Huddersfield 1-0 down, rather than heading against the post after Mathias Jorgensen had flicked on Aaron Mooy’s corner, perhaps Sarri’s afternoon would have been far more uncomfortable.

As it was, David Wagner’s team were unable to do enough to cause serious problems for Kepa on the young Basque ‘keeper’s debut.

He had a couple of routine saves to make, gathering a dipping long-range shot from Alex Pritchard in the first half, and falling on a tame header from substitute Laurent Depoitre in the second.

Head coach Wagner worked miracles on the smallest of top-flight budgets to keep the Terriers up. On this evidence, he will have to do so again if they are to repeat last season’s heroics.