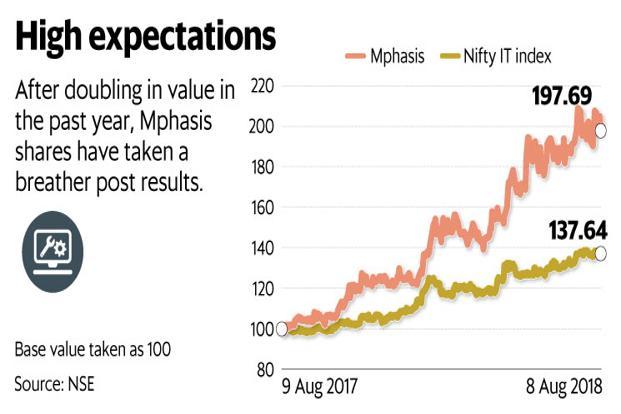 Ahead of Mphasis Ltd’s June quarter results announcement, its shares had doubled in value from year-ago levels. So it isn’t surprising that the shares took a breather after the results were announced. They fell by 3.5% on Wednesday, with growth being a tad below expectations on a sequential basis.

On a year-on-year comparison, however, the June quarter results display the vast improvement in the company’s fortunes in the past year. Revenues rose 16.4% in dollar terms, with growth being led by business from DXC Technology Co., or the erstwhile Hewlett-Packard (HP) channel. DXC was created after the enterprise services business of HP was merged with Computer Sciences Corp.

About two years ago, when private equity fund Blackstone Group Lp had bought a majority stake in Mphasis, one of the worries was sluggish growth in the HP channel, especially with the erstwhile parent selling its stake.

But growth from this channel has picked up. Revenues from DXC rose 23.4% year-on-year in dollar terms, and now account for 27% of overall revenues.

“The HP channel, a drag earlier, has improved lately post minimum revenue guarantee as part of Blackstone’s acquisition & strategic partner status at four entities of HP & DXC,” analysts at Nomura Research wrote in a note to clients earlier this year.

The direct international business has done fairly well too, growing by 15.2% year-on-year. Here, analysts say the company’s prospects have been bolstered by demand from Blackstone’s portfolio companies. Deal wins in this space have been decent in recent quarters and picked up in the June quarter.

Having said that, the relatively slower growth in the direct business vis-à-vis DXC last quarter may have caused concern among some investors.

It should also be noted that Mphasis trades at over 22 times one-year forward earnings, which means investor expectations are running high. At current valuations, there is hardly any room for error.

While there is little doubt that the change in ownership at Mphasis has done it immense good, investors may do well to exercise some caution, given the company’s expensive valuations.