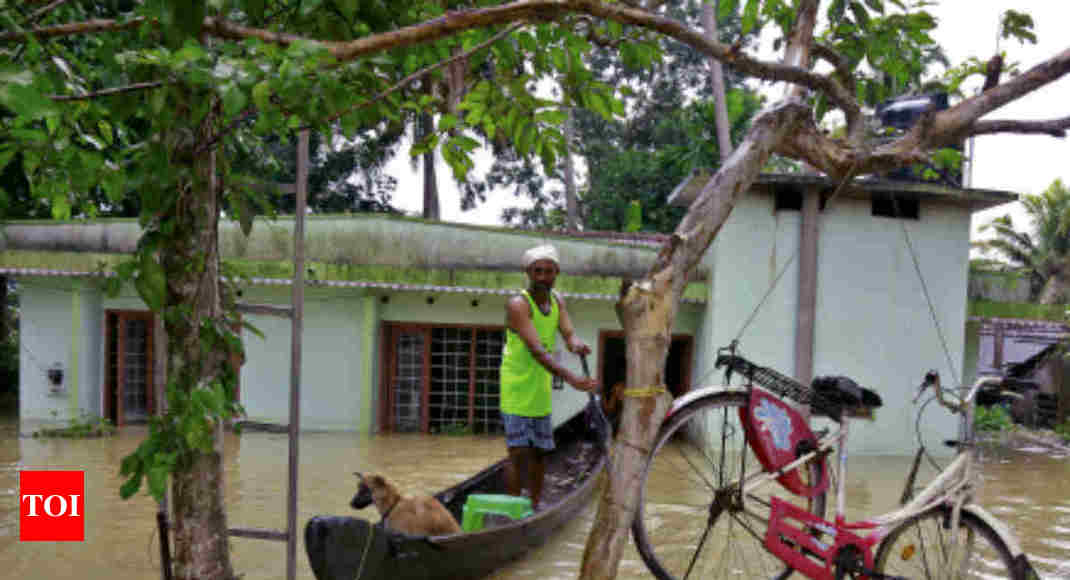 NEW DELHI: The Centre has been treating Kerala floods as a ‘calamity of severe nature’ even before the situation took a more serious turn, with torrential rain inundating large parts of the state over the past week leading to urgent relief measures.

A confirmation of the status of the Kerala situation came in a communication sent by home ministry’s disaster management division to Rajya Sabha secretariat on August 16, stating that “keeping in view the intensity and magnitude of the floods/landslides of 2018 in Kerala, this is a calamity of a ‘severe nature’ for all practical purposes”.

The letter was written in response to a query from Rajya Sabha committee on MPLADS. It stated, “as per information received from the state government of Kerala, 247 human lives have been reported lost and 17,343 houses and huts have been reported damaged due to floods and landslides in the state during south-west monsoon 2018”.

Minister of state for home Kiren Rijiju told TOI that there was nothing technically that Centre “declares” a calamity as a ‘natural calamity of severe nature’. “But when the situation caused by a disaster becomes unprecedented and extremely difficult to handle in a normal rescue and relief operation, the Centre treats it as ‘a calamity of severe nature’. And in Kerala’s case, we have treated it as one. We have been with the people of Kerala from day one,” he said.

A home ministry official said the July 21 Kerala visit by a central high-level team comprising Rijiju and MoS K J Alphons and follow-up tour by an inter-ministerial team from August 7-12 to assess the losses and damage, were undertaken precisely because Kerala floods were treated as a “calamity of severe nature”.

In the past few days, the Centre has pressed all its resources including the Armed Forces and para-military forces like NDRF and equipment for rescue and relief. Central assistance up to Rs 600 crore has been announced so far. “This is in line with what is done to deal with ‘natural calamity of several nature’,” said a government functionary.

The Centre labelling the Kerala floods and landslides as a “calamity of severe nature” will enable a Member of Parliament to recommend works up to Rs 1 crore for the affected district.

As floodwaters receded in Kerala on Monday, the Centre shifted its focus to checking the outbreak of water-borne diseases. The health ministry on Monday airlifted 52 MT of emergency medicines, while a second batch of 20 MT medicines will reach later at night. Around 20MT of bleaching powder and 1 crore chlorine tablets will also be dispatched by Tuesday.

No outbreak of disease has been reported so far, said a government of India release issued after a meeting of the National Crisis Management Committee (NCMC) chaired by Cabinet secretary. A dozen medical teams have been put on stand-by.

The power ministry has moved equipment like electricity meters, coils, transformers etc. to restore the distribution network in the affected areas. Power generation has reached 2600 MW. The department of telecom has made operational 77,000 out of the state’s total 85,000 towers. Out of 1,407 telephone exchanges, all but 13 all are functional. DoT has operationalised a helpline with number ‘1948’ to help trace missing persons.