Leaders of the BRICS economies — Brazil, Russia, India, China and South Africa — are in South Africa this week for their annual three-day summit. The event is being held against a backdrop of a trade war, triggered by the actions of US President Donald Trump’s administration.

In a quiet week on the economic front, analysts and investors will be tracking announcements from the summit, which is hosting over 1,000 delegates including heads of state and business leaders at the Sandton Convention Centre in Johannesburg. The 10th BRICS Summit concludes on Friday.

Modi also said India wants to work with the other member nations on the Fourth Industrial Revolution (4IR), and called for a sharing of best practices and policies in the area. He said the 4IR will have more importance than capital. “High-skill but temporary work will be the new face of employment. There will be radical changes in industrial production, design, and manufacturing,” Modi added.

On 25 July, President Xi Jinping, speaking at the inaugural session of the BRICS summit, said there would be “no winner” in any global trade war, a direct warning to President Trump who has threatened to slap levies on all Chinese imports.

Trump has said he is ready to impose tariffs on all $500 billion of Chinese imports, complaining that China’s trade surplus with America is owing to unfair currency manipulation, reported the AFP. The IMF has warned that rising trade tensions between America and the rest of the world could cost the global economy $430 billion.

China and India are the top two economies in the BRICS group.

The four charts (given below), sourced from the ‘BRICS Joint Statistical Publication 2017’, throw light on how the five countries stack up against each other. 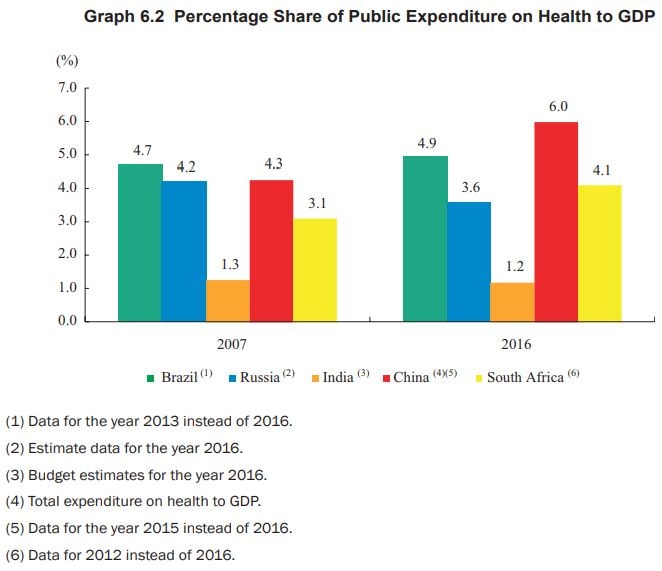 India is looking to set up a BRICS rating agency, reasoning that the methodologies of Fitch, Moody’s and S&P are biased against emerging economies.

Furthermore, co-operation in the areas of energy security and cybersecurity will be discussed. That apart, India is expected to lodge its protest against US trade sanctions and the global trade war.

The silver lining to a dark cloud

Over the past decade, the five nations have had to grit their teeth as they paddled through some rough patches. Topping that list is the China-India border row. That apart, South Africa and India are competing for permanent membership of the UN Security Council. BRICS leaders at the 2018 summit. Reuters.

But, the one area where the grouping has exceeded expectations is the New Development Bank (NDB).

The NDB — established by the bloc in 2014 — has the mandate to mobilize resources for infrastructure and sustainable development projects in the five nations and other emerging economies. NDB supports public and private projects via loans, guarantees, equity participation and other financial instruments.

On 23 July 2018, in the run-up to the BRICS summit, the New Development Bank (NDB) and the BRICS Business Council (BBC) co-hosted a ‘Business Breakfast’ in Durban, South Africa. Sihle Zikalala, the acting premier of the KwaZulu-Natal province of South Africa, the NDB management, heads and members of the national Chapters of the Council and business leaders participated in the meeting, where they discussed investment opportunities and methods for strengthening cooperation between the NDB and the BBC.

Earlier in the month, the NDB decided to lend to two projects, with loans aggregating $600 million in South Africa and China, according to a statement.

The NDB will provide a $300 million loan without a sovereign guarantee to the Development Bank of Southern Africa (DBSA) for a Greenhouse Gas Emissions Reduction and Energy Sector Development Project. It will also hand out a $300 million sovereign loan to China to support the construction of a new metro line in the city of Luoyang, located in central China.