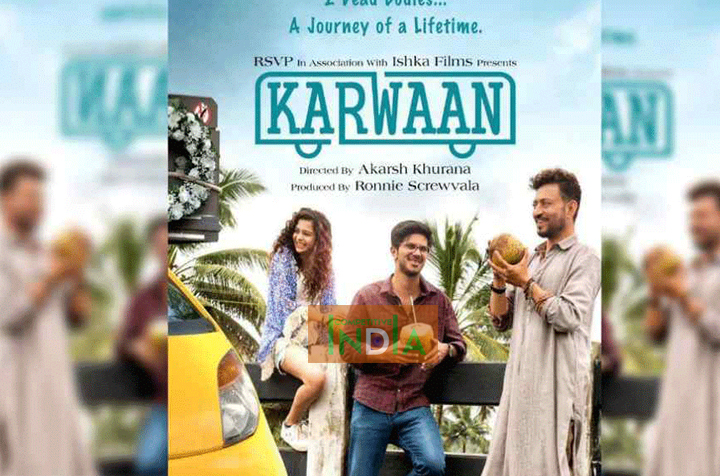 It is a road trip with a difference. These aren’t three friends out on an adventure, but rather three misfits on a journey that goes a bit too off-track.

Avinash (Dulquer Salman) is a repressed young man who hates his IT job, loathes his boss and would rather become a photographer, but for his father (Akarsh Khurana).

His father passes away in a road accident and his body reaches another family by mistake. Avinash’s friend Shaukat (Irrfan Khan) offers his van and company to travel from Bangalore and exchange the body in Kochi.

Enroute, Tanya (Mithila Palkar), the grand-daughter of the now-deceased person with whom the other body was exchanged, joins them. It is a trip that neither of them wishes to be part of but end up enduring it.

The trip is also a chance for them to look inwards. Films on road trips often touch on philosophy with the characters connecting with heart-to-heart conversations and ‘Karwaan’ tries to explore that.

There are moments between Tanya and Avinash where they talk about the divide between real photography versus the Instagram generation. And then there is a lecture about ‘irresponsible angsty’behavior that Tanya gets when she buys a pregnancy kit. These scenes are mostly void of any emotions and you are left searching for a moment to care about these characters.

Dulquer Salman, known for his phenomenal body of work in South Indian films, doesn’t get ample scope to make an impression. The same could be said about Mithali, the web-series star, who is just present in the film and her character doesn’t really open up.

Shaukat doesn’t have a filter to his thoughts and has the audacity to ask Tanya to cover her legs before getting into his car. Unable to speak a single word in English, he has to chat with every foreigner he meets about drugs, cricket, and scantily-clad women.

Add to that, a small plot of Irrfan Khan‘s humorous love story and the film is roving further in an unwanted direction.

All the three characters seem under-cooked and unidimensional. Nothing they do will surprise you on the big screen. Bejoy Nambiar’s story tries to find humor in grave situations and hit the spot only half of the times.

What keeps ‘Karwaan’ going is the unflinching Shaukat with his dry humor, peppered with witty one-liners.

Revolving around two dead bodies, the film doesn’t mourn the dead but celebrates their life.

We aren’t convinced why this road trip began in the first place and if this was the best Dulquer could choose for his launch.