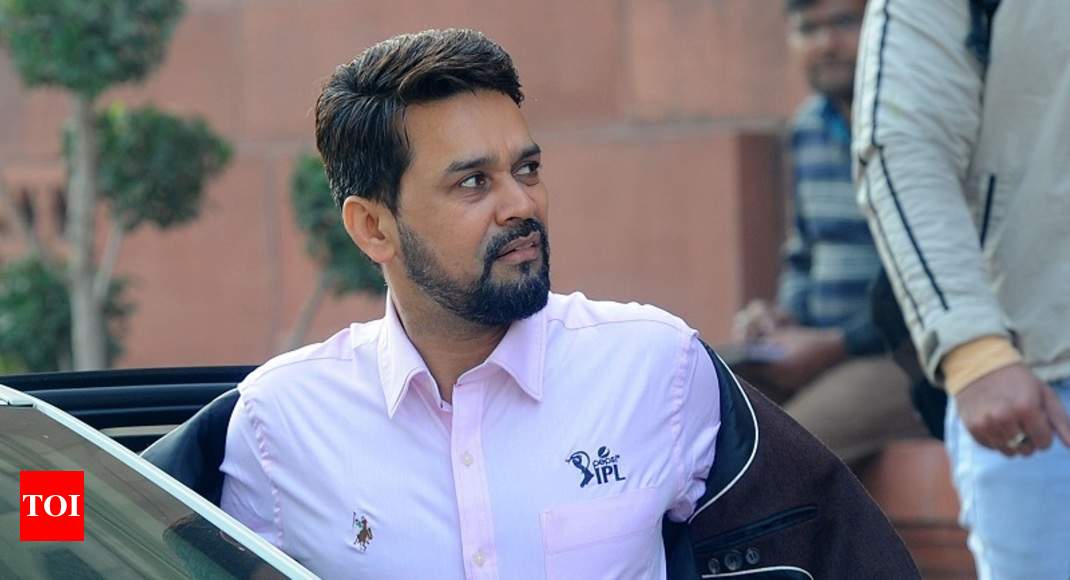 NEW DELHI: BJP MP Anurag Thakur on Thursday told the Supreme Court that he was willing to contest the FIR lodged against him for alleged irregularities in grant of land on lease for the Dharamshala cricket stadium.

These include the HPCA cases in which Thakur and his father and former chief minister Prem Kumar Dhumal are accused along with some bureaucrats over alleged irregularities in grant of land on lease for construction of the cricket stadium.

The top court had on July 18, asked Thakur and others to inform it whether they want to withdraw the case in wake of the state government’s decision to withdraw all prosecutions, which were political in nature.

A bench of Justices A K Sikri and Ashok Bhushan was told by the counsel for Thakur and others that they want to argue the appeal filed against the Himachal Pradesh High Court order by which it had refused to quash the FIR lodged against them.

When the bench, asked senior advocate P S Patwalia about the decision taken by the petitioners, he said, “We would like to argue the matter on merits”.

The court then fixed the matter for further hearing on August 29.

On July 18, the apex court had said cases against the HPCA involving Thakur and Dhumal, are political in nature, but the court will go by the merit in adjudicating the matters.

It had asked Thakur and others, “when the state government wants to withdraw all these cases, then what is your problem”.

The petitioners had said they wanted FIR lodged in the cases to be quashed.

Thakur and others have argued that during the tenure of the Virbhadra Singh-led Congress government in the state, based on a charge sheet prepared by the party, the cases were lodged against Thakur, Dhumal and eight IAS officers, but the Centre had refused to accord sanction for prosecution of the bureaucrats.

The apex court had told Thakur that the Himachal Pradesh government can move an application before the trial court for withdrawal of cases under Section 321 of the CrPC.

“If the application is allowed then well and good for you but if it is not allowed then you have a cause of action to come back to us”, the top court had told Thakur and others.

It had, however, observed, that if the cases are withdrawn then it will be better for them (Thakur and others) otherwise they may face reverses here.

The apex court had on April 17, warned warring factions in the HPCA, involving top politicians from the BJP and the Congress, from making the top court an arena for their political duel.

Virbhadra Singh, who is arrayed as party in the case, has strongly opposed the state government’s decision and said legal procedure needs to be followed for withdrawal of cases.

Thakur and Dhumal had argued that the Himachal Pradesh High Court had in 2013 ordered “status quo ante” in respect of the takeover of the HPCA land and properties and “disapproved” the action of the then Virbhadra Singh government, saying it was “politically motivated”.

Dhumal, Thakur and the HPCA had challenged the Himachal Pradesh High Court order of April 25, 2014, by which it had refused to quash the FIR and stay the criminal trial pending before special judge, Dharamshala, in a case registered for cheating and criminal conspiracy, and under provisions of the Prevention of Corruption Act.

Thakur, who is a BJP MP from Hamirpur and was then the HPCA president, had contended in the apex court that the case was actually a civil dispute but then Virbhadra Singh-led Congress government had made it a criminal case for political reasons.

The FIR in the case was registered by the Dharamsala office of the Vigilance Bureau on August 1, 2013, months after the Congress government assumed power in December 2012.