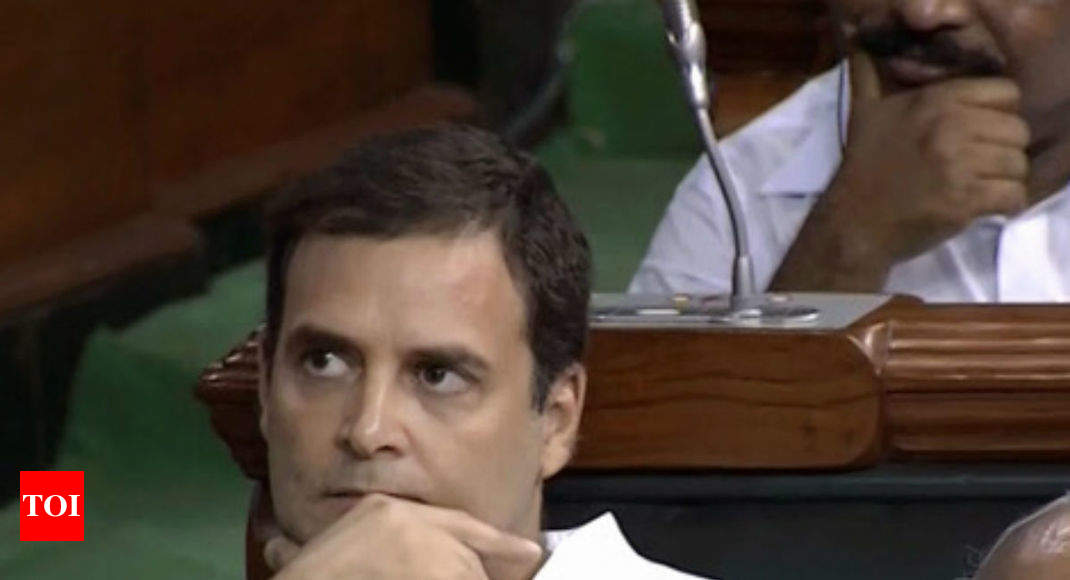 NEW DELHI: The Congress on Friday accused the government and the BJP of misleading Rafale deal and the people of the country on the pricing of fighter jet Rafale through “diversion, lies and deception”.

Congress chief Rahul Gandhi stood by his statement in Parliament that the French President had told him personally that there was no secret clause on the Rafale deal.

“Let them deny if they want. He (French president) said that before me. I was there, Anand Sharma and former prime minister Manmohan Singh were also there,” Gandhi told reporters.

Addressing the Lok Sabha during a debate on the no-confidence motion against the NDA government, Gandhi said the French president had clearly conveyed to him during a meeting that there was no problem in sharing details relating to the Rafale deal worth Rs 58,000 crore.

Hours after Gandhi’s comments, a Spokesperson in the French Foreign Ministry said France had signed a security pact with India in 2008 which legally binds the two countries to protect the classified information which could impact security and operational capabilities of the defence equipment.

However, the official did not clarify whether the provisions of the pact restrict the Indian government to disclose price details of the Rafale deal.

Congress’ chief spokesperson Randeep Surjewala hit out at Defence Minister Nirmala Sitharaman for having “misled” the people and Parliament on the Rafale deal pricing, alleging that this “diabolical game of loss to public exchequer” has led to sacrificing the interests of public sector undertaking, Hindustan Aeronautics Limited (HAL).

“A frustrated BJP is playing a 3D Game on Rafale – ‘diversion, damning lies and deception’,” he said.

The Congress leader alleged that the “unilateral” purchase of 36 Rafale aircraft, suffers from complete non-transparency in disclosure of ‘purchase price’ of aircraft, violation of the mandatory provisions of the ‘Defence Procurement Procedure’, absence of prior clearance from Cabinet Committee on Security, sacrificing national interest on ‘Transfer of Technology’ to HAL, bypassing the PSU on the Rs 36,000 crore ‘offset contract’ in favour of a company with zero experience of manufacturing fighter aircraft.

Surjewala alleged that there was a loss of Rs 41,205 crore of public money on Rafale pricing.

This price is apparent from the annual report, 2016 of Dassault Aviation, Surjewala said and asked whether the BJP will explain the extra amount of Rs 41,205 crore paid from public money.

“The Modi government and the defence minister are misleading the nation on ‘non-disclosure of price’,” the Congress spokesperson alleged.

Defence minister Nirmala Sitharaman in a press conference on November 17, last year publicly directed the defence secretary to share the purchase price of 36 Rafale aircraft, he said and asked, “Why is she now refusing to disclose the price? Why is the Modi government then refusing to disclose to price?”

Surjewala said the minister of state for defence, Subhash Bhamre, in a reply to an unstarred question in the Lok Sabha on November 18, 2016, revealed the price of each Rafale aircraft as approximately Rs 670 crore and asked, “Why is the defence minister then lying today?”