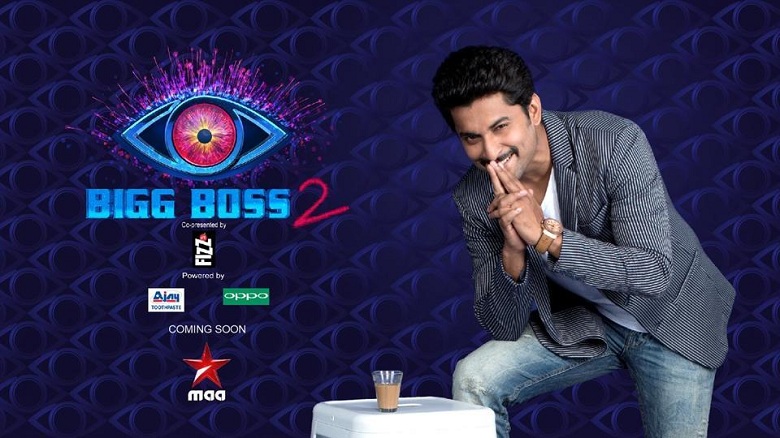 After the successful first season of Bigg Boss Telugu, Star Maa is all set to launch season 2 with actor Nani as the host.

Alok Jain, Business Head, Star Maa Network, said, “We are extremely thankful to our viewers for the stupendous response to Bigg Boss season 1 and all our subsequent new shows. We are excited to announce Nani as the host for Bigg Boss season 2. With his ability to connect with audiences across all age segments, we look forward to this season being more exciting.”

Since the launch of season 2 and call for entry promos for common people, the show has been generating a lot of buzz, curiosity and expectations. The season 2 is going to be longer with more than 100 days compared to 70 days in last season. About 16 housemates will be locked inside a house, completely cut-off from the outside world, under the watchful gaze of 70 cameras that never stop rolling. Millions of viewers will see housemates forge new relationships and maybe lose a few inside the house.

Like the promo says, this season promises to be a lot more masala and excitement – Yedeina Jaragachu (Anything can happen).

Actor Nani, the new host of Bigg Boss Telugu season 2, has announced the premiere date of the reality show.
The actor took to his social media account to share the details.

According to the latest update, the first episode of Bigg Boss 2 will go on air from the 10th of June. 16 contestants will participate in the forthcoming season of Bigg Boss. However, unlike the first season, Bigg Boss contestants are supposed to spend 100 days in the Bigg Boss house as a part of the contest.

The list of contestants for Bigg Boss 2 has not been officially announced yet, though there are many expected lists doing the rounds on social media and otherwise.

Bigg Boss 2 is one of the most controversial reality shows on Telugu TV. It is well-known that the upcoming season of Bigg Boss will feature common people. According to sources, minimum two commoners will be allowed to take part in the show.

Bigg Boss season 2 is all set to take off from June 10th. The show will be aired at 9.30PM from Monday to Friday and at 9 PM on Saturday and Sunday on Star MAA. Natural Star Nani is all set for his TV debut and he is excited about the same as never before. Meanwhile, 16 celebrities are said to be taking part in the TV Show and the following is the list of the celebrities doing rounds on the social media.

There is a lot of buzz around the second season of the popular TV show Bigg Boss Telugu. A lot of film personalities took part in the first season and Siva Balaji ended up as the winner of the first season. Meanwhile, there were a lot of lists doing rounds on the social media that particular persons could be making it to the final list in the season two.

Popular television reality show Bigg Boss Telugu is now back for a second season. The first promo for the show has been aired by Star Maa announcing auditions for commoners who can be part of the reality show. The first installment of the show was hosted by Jr NTR and was a hit among the audience. Siva Balaji took home the trophy and a cash prize worth Rs 50 lakh. However, it is said that Jr NTR will not be coming back to host the show in its second installment. Reports suggest that Natural Star Nani will host the second season of Bigg Boss Telugu.

While the first season did not have non-celebrity contestants, this season will follow the footsteps of its Hindi counterpart and allow commoners to be part of it. The final list of participants is yet to be revealed. The show is expected to go on air in June or July and will be shot on an exclusive set at Annapurna studios, Hyderabad.

Reality show Bigg Boss is popular among Indian television audience. While auditions for the twelfth season of the Hindi version of Bigg Boss is now open, the show made its entry in south quite recently. Both the Tamil and Telugu version were a huge hit with stars like Kamal Haasan and Jr NTR hosting the show.

Bigg Boss will have a set of contestants who will share a house that is constantly under surveillance. The contestants are given a series of gruelling tasks and the winner takes home a cash prize.

Fans rejoiced when on May 5, the second season of the reality show ‘Bigg Boss’ Telugu was announced in a video featuring ex-contestant Diksha Panth.

With the first season that premiered last year, hosted by Jr NTR being a huge hit, season 2 of the show has high expectations. The exciting part this season however is the fact that anyone can audition to be a part of the show. When the show’s second season was announced, a promo was posted by the channel the show airs on, on their social media page.

The promo received more than 77 shares, 53k views, 963 likes and numerous comments, some of whom seem excited to be provided with a chance to be a part of the show, while some others wonder why anyone would want to watch a normal everyday man or woman on-screen. The channel is however promoting the season 2 with full swing, and is being met with good response on social media each time. Another promo too has more than 973 likes, 72 shares and numerous comments.

Many comments under the promos claim to have applied for the show themselves, filling up the form available in the link and uploading their audition videos. However, some complain about the website lacking a submit button after the forms are filled. None-the-less, this move seems to have garnered a lot of response and it remains to be seen who will be the contestants of the upcoming season of ‘Bigg Boss’ Telugu.

Another aspect of the show making people curious is to know who the host of the show would be. Jr NTR had proven him to be more than able to hold the attention of the audience even on the small screen, with many of his fans tuning in on the weekends just to watch him. Many now too comment wanting the star back for the second season. However, speculation is rife that even Nani is in the run for hosting season 2. More details of the show are awaited.