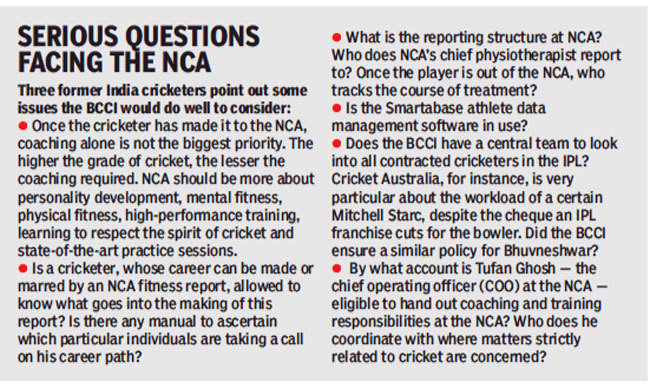 There has been quite a bit of stench emanating from the National Cricket Academy (NCA) – the injury-management, rehabilitation and grooming centre at the M Chinnaswamy Stadium in Bangalore – these past few weeks. Those reeking of it stand unnoticed as Indian cricket, embroiled in never-ending legal battles, struggles to find its feet.

The cricket board never fails to remind the world of the clout it wields, but refuses to see the big picture back home. As things stand, that picture is bleak. The fact of the matter is that the Board of Control for Cricket in India’s (BCCI) most prized institution, the NCA – which a decade or more ago had set sights on rubbing shoulders with Australia’s well-established Centre of Excellence – is now its biggest liability.

How else does one describe a cricket academy where a cricketer has no idea who is preparing his fitness report?

The horror stories that get churned out from the NCA on a daily basis are endless. The chief physiotherapist at the academy – as highlighted recently by TOI – doesn’t mind sending cricketers’ fitness reports to a private clinic in which he used to be a director. It hasn’t mattered to those running the affairs of Indian cricket that despite all the financial tools at their disposal, there’s an obvious conflict staring them in the face.

The BCCI, for all the authority it likes to go stamping around, sacked an overseas employee at the NCA in July last year citing conflict of interest. In reality, it was the employee’s demand for a revised pay-hike – so as to avoid conflict – that saw him go.

The curious case of Wriddhiman Saha’s injury – thumb or shoulder or thumb and shoulder or first thumb, then shoulder, it’s all still a mystery yet – is a case in point. Five days ago, the BCCI posted the entire timeline of Saha’s injury on its website and the details of it are as confusing at the NCA’s own ways of functioning.

From MRI to ultrasound to guided multiple injections, supervision, consultation, rehabilitation, presentation – all kinds of fancy words find a mention in the timeline, except for the most important factor: BCCI either had no clue about Saha’s shoulder injury, or at least chose not to make it public, till it was time for the selectors to pick the squad for the tour of England.

The second important bit in Saha’s injury timeline is the following line: “Appropriate doctor consultations were done with Dr Srikanth Narayanaswamy, sports physician, who then advised an ultrasound guided injection, which was duly done.”

Who is Dr Narayanaswamy? Is he a consultant with the BCCI in any official capacity? Has the board offered this doctor a contract? On what grounds was this individual consulted? Nobody in the board except for one particular physiotherapist has any idea.

What’s worse is that even the players whose reports are being referred to this individual don’t know what official capacity he holds in Indian cricket. “It’s that bad. And trust me, when I say bad, I’m not underplaying the seriousness of it at all,” a senior India cricketer said.

Also, from the time Saha returned from South Africa to the time his shoulder surgery was advised, who was responsible for his rehab? Who in the board was tracking his daily progress? And on what grounds was he allowed to play in the IPL?

In the case of all-rounder Bhuvneshwar Kumar, who will miss out on the first three Test matches in England, there was miscommunication between BCCI’s own staff. As one BCCI member puts it: “There’s no detailed note on the injuries to contracted players in the last one year. Which doctor diagnosed the injury? What was prescribed? Did the rehabilitation happen as was projected initially? Were there any deviations? Were the injuries in competition injuries (read IPL) or were the injuries picked?”

The Indian national team, paradoxically, has put the onus on itself to make fitness the top priority, an effort for which individual players need to be lauded. The question that BCCI – in the present case, the CoA – needs to answer is, what exactly is the protocol at the NCA where the line of communication is concerned?

For starters, the NCA committee, one that was held under dispute by the CoA through their interpretation of the Supreme Court order, is a non-existent one at the moment. In the light of the same, there’s no word on the reporting structure at the academy.

An email written to the BCCI recently, by a member of the Board itself, highlights some uneasy questions: (What is) the reporting structure in the NCA? Do the trainers report to the physios or do the physios report to the trainers? How exactly does this work? Who decides on the course of treatment and the workload of the players? In the case of a difference of view between a physio and a trainer, whose view prevails? What is the exact nature of relation between the head physio at the NCA and the physio of the Indian cricket team? How are the workloads of the senior team members managed?

The BCCI-CoA may have grand plans for the academy going forward. However, in the present context, these questions raise serious issues that need immediate answers.