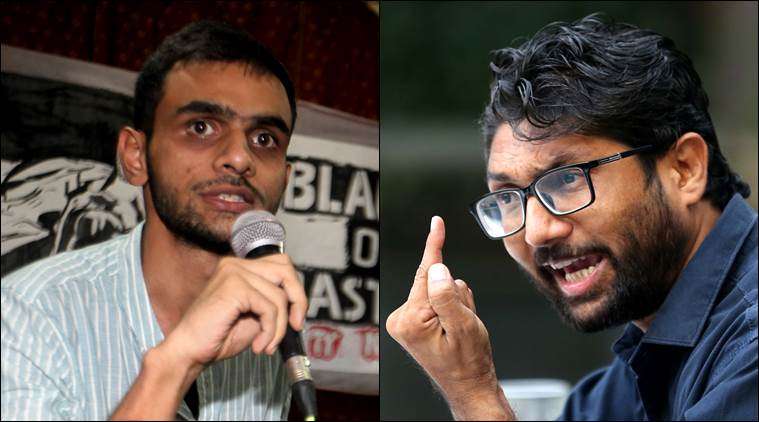 The Pune police, late on Wednesday night, registered a criminal case against newly elected Gujarat MLA Jignesh Mevani and student leader from JNU Umar Khalid under charges of ‘creating communal disharmony’ through the ‘provocative speeches’ they delivered at Elgaar Parishad held at Shaniwarwada in Pune on December 31.

The complaint application was received at Deccan Gymkhana police station, which was submitted by two youths Akshay Bikkad (22) and Anand Dhond (25), who claimed not to be affiliated with any organisation. The two had demanded registration of criminal offence against Mevani and Khalid for promoting enmity between different groups through their speeches. The complaint was later forwarded to Vishrambag police station, under whose jurisdiction the Elgaar Parishad was held. The police said on Wednesday that they were analysing speeches of the duo in reference to the complaint. Senior inspector Appasaheb Shevale said that the FIR was registered late in night on Wednesday and that Mevani and Khalid were booked under section 153A of Indian Penal Code (Promoting enmity between different groups on grounds of religion, race, place of birth, residence, language, etc., and doing acts prejudicial to maintenance of harmony) and IPC sections 505 (Statements conducing to public mischief) and 117 (Abetting commission of offence by the public). The FIR lists out several statements made by the two at the conference.

The Elgaar Parishad was held in Pune to mark the 200th year of the Battle of Bhima Koregaon, a place in present day Pune district, which was fought between the then British Indian Army and the Peshwas. Besides Mevani and Khalid, Rohith Vemula’s mother Radhika Vemula, Dalit leader Prakash Ambedkar, naxal activist Soni Sori, and Bhim Army’s Vinay Ratan Singh were among others who attended the conference.