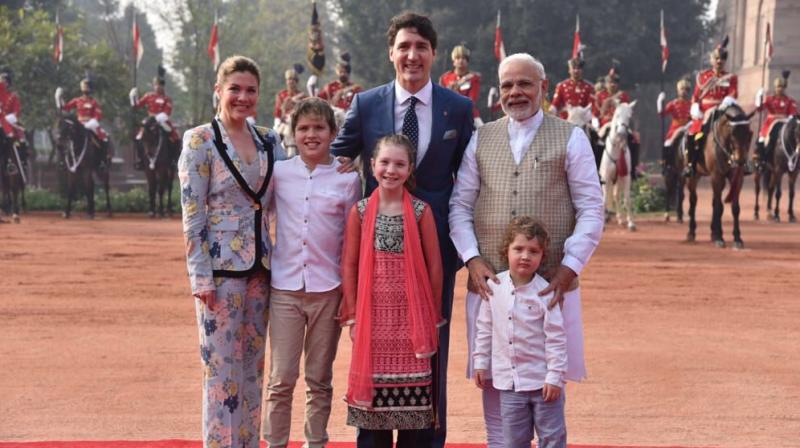 Modi and Trudeau are scheduled to hold bilateral talks at around noon.

During the meet, the two leaders are expected to focus on trade, defence, civil nuclear cooperation, space, tackling climate change energy and education.

Cooperation on counter-terror measures is also expected to be a key area of focus in view of India’s concerns over Sikh radicalism in Canada. After receiving the ceremonial guard of honour at the Rashtrapati Bhavan, the Canadian Prime Minister and his family paid tribute to Mahatma Gandhi at Rajghat in New Delhi.

“I hope PM @JustinTrudeau and his family had a very enjoyable stay so far. I particularly look forward to meeting his children Xavier, Ella-Grace, and Hadrien. Here is a picture from my 2015 Canada visit, when I’d met PM Trudeau and Ella-Grace,” Modi tweeted.

The Canadian Prime Minister replied, “She remembers it well, @narendramodi! It’s been great to visit so far – we’ll see you today.”

Trudeau, who is on his maiden visit to India, arrived on Saturday evening and the Canadian PM and his family toured the country amid talks of snub by the political establishment over what’s seen as Canada’s soft stance on Sikhs who demand Khalistan.

On Thursday, Khalistani terrorist Jaspal Atwal was found to have been invited by Canadian High Commissioner Nadir Patel for a dinner in Delhi.

The dinner invitation to Atwal at a reception for Trudeau at the Canada House was cancelled.

On Tuesday, Atwal had attended an event in Mumbai and was photographed with Justin Trudeau’s wife Sophie Trudeau and Canadian minister Amarjeet Sohi.