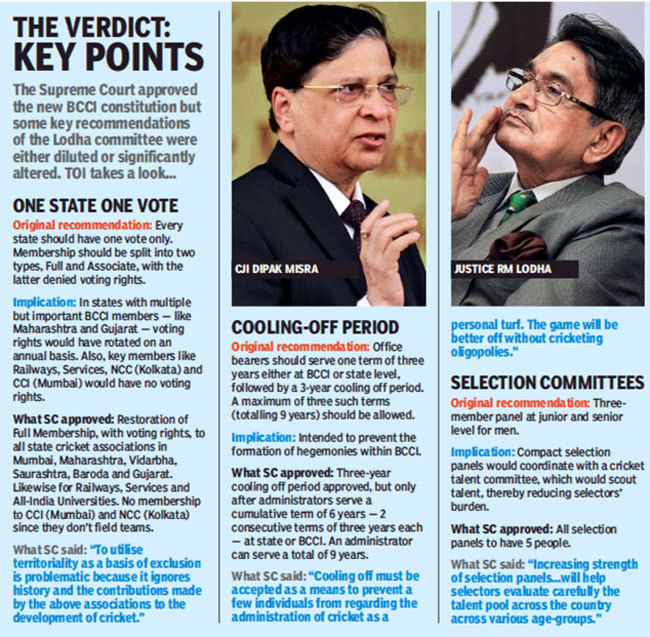 NEW DELHI: The Supreme Court on Thursday restored crucial aspects of the Board of Control for Cricket in India‘s functioning by junking Lodha committee reforms like the one state-one vote rule and relaxing the cooling off period for officials while finalising the board’s governance code.

The court recognised the validity of BCCI’s traditional structure and the cricketing legacy of associations like Vidarbha and Mumbai in Maharashtra and Baroda and Saurashtra in Gujarat and reinstated these entities as full members of the board with voting rights. The one state-one vote rule had extinguished their representation while giving voting rights to states with feeble cricketing presence, raising fears of proxy or dummy voting.

The SC also increased the number of selectors from three to five while the relaxation in the cooling off period is expected to help the BCCI and state boards function smoothly. Restriction in the composition of the selection committee had led to a situation where persons with limited experience were found to be eligible and made it to the committee.

Two years after accepting the Lodha panel’s recommendations, the SC ordered that the finalised constitution be registered in four weeks under the Tamil Nadu Societies Registration Act, 1976, and asked member associations to ensure conformity of their constitutions with the BCCI’s and register them in 30 days, clearing the way for elections under the Committee of Administrators’ supervision.

Fresh elections to BCCI would see a whole new crop taking the reins of the richest cricket board in the world as the SC denied any role to ministers, bureaucrats, holders of public office (MPs and MLAs), office-bearers of other sports or athletic associations and those against whom charges have been framed in any criminal offence.

ALSO READ: Disappointed that recommendations have been diluted: Justice Lodha

The SC also retained Lodha panel recommendation on age cap of 70 years for members. But other than that, a bench of Chief Justice Dipak Misra and Justices A M Khanwilkar and D Y Chandrachud made significant changes, including grant of full membership to three associations each from Maharashtra and Gujarat as also to Railways, Services and Association of Indian Universities.

Discarding its earlier proposal of rotating membership among multiple associations from these states, which historically had full membership, Justice Chandrachud while writing the judgment for the bench said, “To utilise territoriality as a basis for exclusion is problematic because it ignores history and the contribution made by the associations for development of cricket and its popularity.

“Having due regard to the contributions made by Mumbai and Vidarbha in the state of Maharashtra and by Baroda and Saurashtra in state of Gujarat to the game of cricket, it would be appropriate to also grant them full membership of the BCCI. We, however, maintain the decision not to grant full membership to National Cricket Club and Cricket Club of India. Neither of the two clubs field teams in the Ranji Trophy. They cannot be placed at par with other state associations.”

For Railways, Services and Association of Universities, the SC said they will be represented by a former cricketer as member in BCCI. They would be chosen former players of each of these organisations and not nominated either by government or their sports promotion boards.