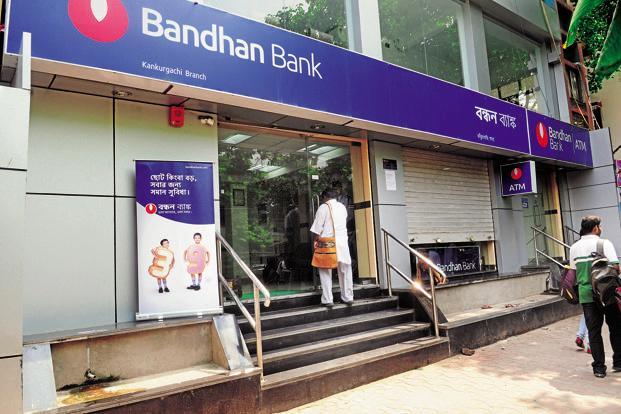 Bandhan Bank shares have gained 84% since listing on 27 March while the S&P Bankex rose 13.55% during the same period. Photo: Mint

Mumbai: Kolkata-based Bandhan Bank Ltd on Wednesday became the seventh most valued listed lender, beating Yes Bank, which has a nearly seven times larger loan book than the former. Data from BSE showed that Bandhan Bank had a market capitalization of Rs 84,289.56 crore, after its shares closed 1% higher on BSE to Rs 706.65. However, the stock erased some its early gains and failed to surpass Yes Bank in market capitalisation at market close. Earlier intraday, Bandhan gained as much as 2% to Rs 714 a share.

Bandhan Bank’s better-than-expected earnings as well as improved asset quality have helped its stock. It has a gross bad loan ratio of 1.26%, the lowest among Indian lenders.

A return on asset close to 3.5% and a net interest margin of above 10%, among the highest for Indian lenders, too, have helped. So despite trading at relatively high valuations of close to 5.9 times its expected book value for this fiscal, the stock has found favour with investors.

The stock has gained 88.44% since listing on 27 March while the S&P Bankex, the broader gauge of banking stocks, rose 13.7% during the same period.

Among the analysts covering the Bandhan Bank stock, five have a “buy” rating, one has a “hold” rating. No brokerage has a “sell” rating on the stock.

Mumbai-based Yes Bank continued to deliver a healthy performance on all major operational parameters for the June quarter. On 26 July, it reported a profit which grew by 30.5% to Rs 1,260 crore while net interest income rose 22.7% to Rs 2,220 crore. Gross non-performing assets as a percentage of total loans stood at 1.31% in the quarter from 0.97% a year ago.

“Asset quality has stayed largely resilient for the bank across cycles but recently saw witnessed pressure. Asset growth has remained strong. However, performance on margins and asset quality would be the key factor to watch, going ahead,” said ICICI Direct Research in a note to its investors.

Among the analysts covering Yes Bank stock, 45 have a “buy” rating, five have a “hold” rating, while three have a “sell” rating, according to Bloomberg data.