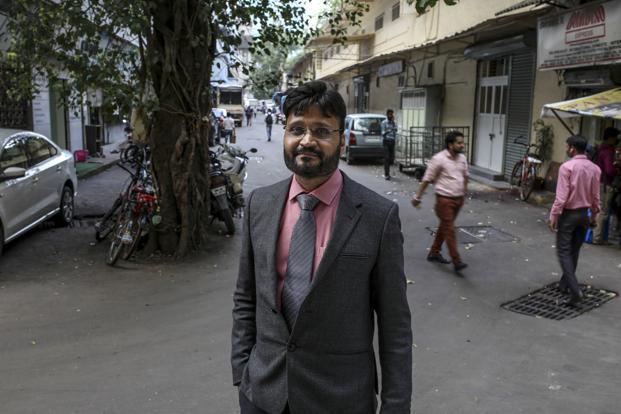 Devendra Jain was abducted one muggy Mumbai afternoon last September, whisked away in a car by angry investors of an insolvent firm he was tasked with reviving.

The chartered accountant says he stood outside the firm’s midtown office that day, by a bustling main street. Suddenly a group of investors walked up, demanding to know when they’d recover their money. Then a car whizzed by; he was bundled in and driven to a remote bungalow. It took nearly 24 hours and a lucky phone call for the police to track him down. He now keeps an armed bodyguard with him at all times.

Jain belongs to a new breed of bankruptcy experts who are becoming India’s footsoldiers as Asia’s third-largest economy attempts to clean up the $210 billion of stressed debt choking its financial system. Called resolution professionals, or RPs, they are appointed by courts to revive or wind down delinquent companies. But they face treacherous terrain: Obstructionist owners, worker protests and even the rare kidnapping.

The stakes are so high and the pressures so many that brokers have begun offering bankruptcy professionals special insurance plans, including one that covers counselling costs for psychiatric trauma or personal accident.

Their work load is only set to increase. India has a bad-loan ratio that’s second only to Italy among major economies, and its central bank expects the problem to worsen. As Prime Minister Narendra Modi’s government attempts to preempt a major crisis in the banking system, its success will hinge at least partly on these middlemen charged with rehabilitating the nation’s most battered corporations.

“There are a lot of expectations from everyone,” said Ashish Chhawchharia, head of Grant Thornton India’s restructuring services practice. “The RP is essentially parachuting into the middle of a mess and has to fix it all in 270 days at most.”

India’s bankruptcy legislation is new. Enacted in 2016, it requires an insolvency professional to work out a repayment plan for the company within nine months, failing which it’s liquidated. It falls on the RPs to ensure that suppliers keep supplying, employees don’t quit, customers don’t flee, and owners aren’t disruptive, said Dinkar Venkatasubramanian, a partner at EY’s restructuring and turnaround services.

Jain, who has worked on about 12 insolvency cases, said he travels 15 days a month, criss-crossing courts from Hyderabad to Mumbai and New Delhi to Ahmedabad. Twelve-hour work days often extend to 14 hours when deadlines loom. The job also demands an ingenuity no accounting class has prepared him for.

When his abductors picked him up that Friday, he worried they might have weapons. He avoided the food they offered for worry it might be drugged. But as he realized they didn’t intend to harm him and were mainly desperate to find a way to recover their money, he kept them calm and convinced them to let him call his family.

The group was arrested and then let out on bail, he said, but he hasn’t pressed the case because they didn’t hurt him. Still, his family has grown anxious, pushing him to give up on bankruptcy cases. “Everyone targets the RP: He is the outsider,” said Jain, who plans to keep going for now.

Company courts have had to ask the police to provide protection to bankruptcy professionals and ordered various parties to cooperate with them in about 20 cases, according to M.S. Sahoo, chairman of the Insolvency and Bankruptcy Board of India.

Chhawchharia of Grant Thornton said there’s often nervousness in the early days of taking over an insolvent company. The mood can be grim. Hundreds of hostile workers await their fate at factories being restructured. Employees, who may not have been paid for months, demand the RP do so immediately.

At one factory, workers staged a sit-in and refused to let his team members enter to check inventory levels, he recalled.

Angry creditors make unreasonable demands; sometimes even insisting all senior managers be sacked to save costs. Irate suppliers circle for past payment. Or the electricity authority might, literally, turn the lights off due to unpaid bills. The bankruptcy professional, meanwhile, might have little cash to work with, especially if the company had stopped operations.

“How do you expect the RP to pay the costs of travel, valuer or even publishing newspaper ads for a public announcement?” Chhawchharia said. “At times, we have even paid from our pockets just to meet the deadlines on these statutory requirements.”

A lawyer or accountant with 10 years of experience must clear an exam held by the country’s insolvency board to register as an insolvency professional. There were 1,812 registered professionals as of March.

At one company, Venkatasubramanian had to change the security crew to block the owners because they were inciting workers and vendors.

Then there are the human dilemmas. At one insolvent firm, he and his team told workers they’d attempt to find a resolution to keep the business going. But the plan didn’t get the backing of sufficient lenders, and he recalls the disappointment of personally breaking the news that the company would be liquidated and jobs lost.

“You could end up putting out different fires at different times,” Venkatasubramanian said of his job.

As many as 701 firms had been admitted into insolvency by March 2018, but revival plans for only 22 firms have received approval from creditors so far while 525 are still being overseen by RPs, according to latest IBBI data. The rest are either in appeal before a higher court or were being liquidated.

Indian laws allow owners or employees to file liability lawsuits against the RPs when things go wrong, so brokers are now offering them insurance. Cover ranges from about $10 million to $35 million. One policy — with a cover of less than $5 million offered by JLT Independent Insurance Brokers Pvt. — insures against cyber-extortion, kidnapping, ransom and negotiator fees in addition to the counselling costs.

“It’s like being thrown in the deep end of the sea with your hands and feet tied,” said Amit Agarwal, head of the financial lines group at JLT. “Buying insurance is like throwing them a tube.”