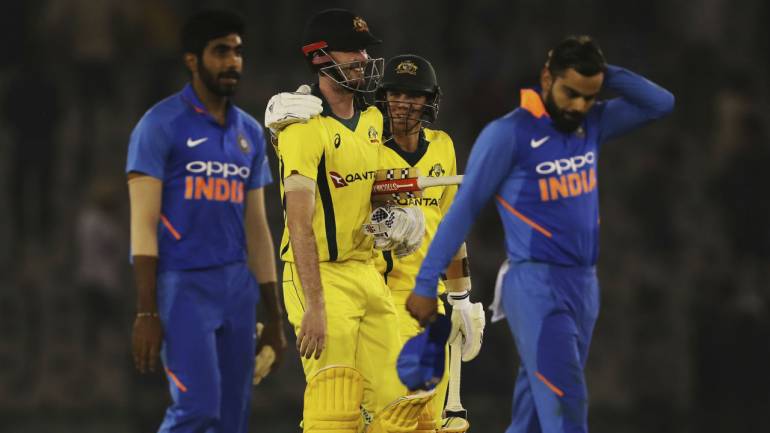 India suffered their first ODI home series defeat since October 2015,In final ODI against Australia by 35 runs at Feroz Shah Kotla in Delhi.

India suffered their first ODI home series defeat since October 2015 as they went down in the fifth and final ODI against Australia by 35 runs at Feroz Shah Kotla in Delhi. They last lost ODI series to South Africa in October 2015 at home.

Chasing a target of 273, India were all out for 237 after being made to field first. India have not successfully chased a 250-plus total at the Kotla in the last 37 years. It was way back in September 1982 against Sri Lanka when they overhauled a 278-run target.

Opener Usman Khawaja hit an exact 100 off 106 balls as he shared two big partnerships at the top of the order to set platform for the visiting side.

India’s experiment with the playing XI to get their combination right for the ICC World Cup 2019 proved expensive for the hosts as they lost the series 3-2.

The home side dropped K L Rahul from the game, tried Rishabh Pant at number four and Vijay Shankar at five in the last-ditch effort to find right batting order, resting the veteran MS Dhoni in the fourth and fifth ODI.

The proud Aussies receive the trophy – an ODI trophy that has been long overdue. Their first one since the Newlands Saga, and one that echos Bradman’s Invincbles in England several decades ago – coming back from 0-2 to win 3-2 against India in their home conditions, with their manic crowd spurring them on, it really is an unprecedented achievement. I know, I know – those were gruelling Tests, these are just pyjama ODIs. But the character, the never-say-die attitude ingrained in the DNA of the Australians has surfaced at exactly the right time – so much so that even the fact that India were 2-0 up works in favour of the Aussies. This 3-2 is more uplifting than 5-0. Why? Pressure. This is the kind of situation where numbers can lie. They really can.

– First series loss for India at home since losing 2-3 to South Africa in October 2015.

– First time India have been bowled out thrice in any series since the tri-series in Australia in 2012.

– The last time before the current streak India lost three consecutive home ODIs was way back in November 2009 – against Australia.