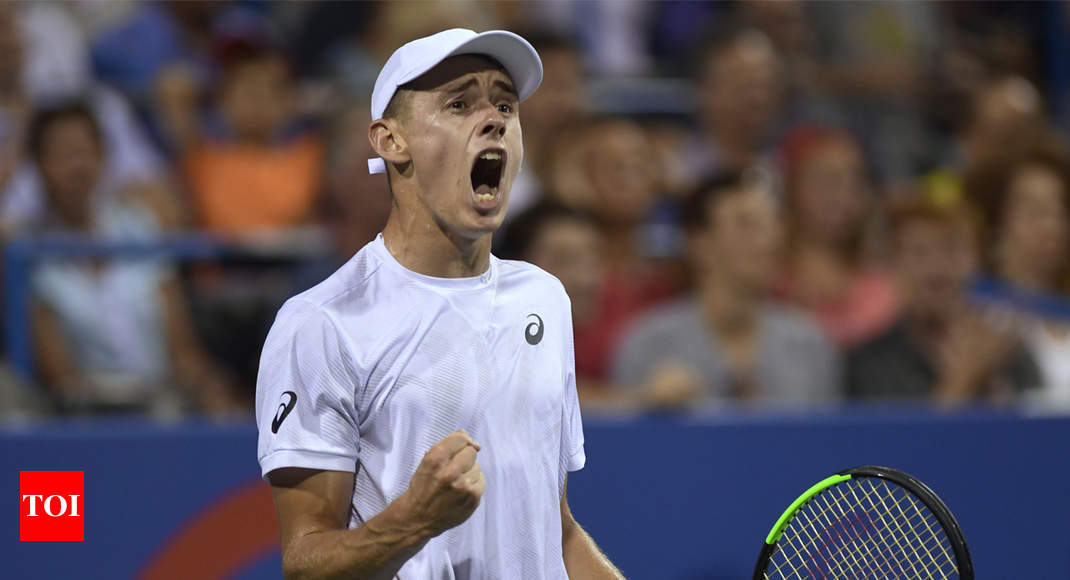 “It’s one of the biggest wins of my career,” De Minaur said. “Dug deep and never gave up. Couldn’t be prouder of myself.”

De Minaur, ranked 72nd, won the last six points of the tie-breaker to force a third set, then broke 46th-ranked Rublev in the final game, winning on his fourth match-point chance when the Russian double faulted.

“I’m probably going to look back on that and not know how I did that,” De Minaur said. “I managed to string along some great points. It was one of my best matches.

“I had to play some really good points to get myself out of there. I took advantage of a lot of short balls and tried to dictate and that turned the match around.”

It will be the youngest combined age of any ATP final since 20-year-old Rafael Nadal beat 19-year-old Novak Djokovic in 2007 at Indian Wells after the ATP’s first all-21-or-under semi-finals since 1995 in Buenos Aires.

“This is amazing for tennis,” Zverev said. “It’s good to see the young guns come up.”

Zverev seeks his ninth career ATP title and third of the year after Munich and Madrid. He could join a Washington back-to-back champions list that includes Argentina’s Juan Martin del Potro (2008-09) and Americans Andre Agassi (1990-91 and 1998-99) and Michael Chang (1996-97).

“I’m playing great and hopefully I can win,” Zverev said. “I hope I get out there and play a good match and get to Toronto with another title.”

It’s only the second career ATP final for De Minaur, the son of a Spanish mother and Uruguayan father who lost to Russian Daniil Medvedev in January’s Sydney final.

De Minaur, aided by a walkover Friday when three-time Grand Slam champion Andy Murray withdrew before their quarter-final, could become the first player to win his first career title at Washington since James Blake in 2002.

Rublev, who returned in July from a three-month layoff due to a lower back stress fracture, beat American Denis Kudla 6-1, 6-4 earlier Saturday in a rain-delayed quarter-final.

Rublev broke DeMinaur at love to close out the first set and raced ahead 6-2 in the tiebreaker, but De Minaur hit an ace, service winner and forehand winner to pull level, then forced a third set on a Rublev mis-hit and wide backhand.

De Minaur lost his only meeting with Zverev in a Davis Cup fifth-set tie-breaker earlier this year.

“It was a very tight match,” De Minaur said. “I’m going to have to play some very high-quality tennis. The main thing is to recover and get back tomorrow and do the same thing.”

De Minaur takes his style from mentor Lleyton Hewitt, his childhood idol, saying, “Growing up I always saw his never-say-die spirit. It’s something I try to replicate on the court.”

In the companion WTA event, two-time Grand Slam champion . of Russia won 6-2, 6-2 twice to reach the final, first downing Kazakh eighth seed Yulia Putintseva in a match that had been halted by rain then dispatching Germany’s Andrea Petkovic.

Kuznetsova, the 2014 Washington winner, seeks her first WTA title since Moscow in 2016 and the 33-year-old appreciated US cheers and support.

“Russia and America politically, it’s probably not so good, but it’s great people in sport are outside of this,” Kuznetsova said.