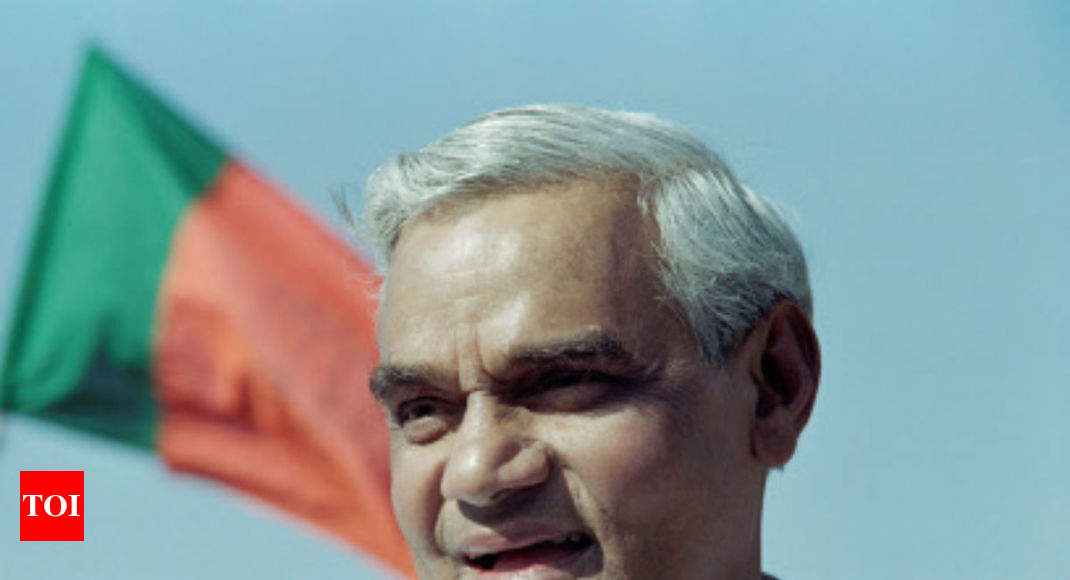 In an age when binaries seem to define political and social identities, Atal Bihari Vajpayee was near impossible to straitjacket. He could disarmingly equate ‘Hindutva’ with ‘Bharatiyata’, as he did in an interview with TOI in 2004, or declare “Sangh is my soul” in RSS mouthpiece Organiser in 1995 or plainly iterate his credentials as a swayamsewak at an interaction in Staten Island in 2000 when he was Prime Minister.

In a life lived fully, Vajpayee never shied from grasping all that it had to offer, revelling in the company of poets, politicians and friends, tucking into a good meal with relish, sharing a joke with gusto and yet offering pithy and enigmatic one liners when cannily sensing restraint to be a better and wiser option.

What is evident is that he understood the virtues of moderation, of the soft touch, while not really compromising on the basics of the ideology he represented and advocated long before the Ayodhya movement when Rashtriya Swayamsewak Sangh was hardly mainstream and Congress seemed all but unshakeable. Aided by an inherent charisma, Vajpayee collected friends and admirers, many for life, as he progressed through a career largely spent in the opposition.

For all his sociable traits, the BJP veteran, India’s first truly non-Congress PM, could be reclusive, not close to many and capable of keeping his emotions to himself. Yet, he was fiercely loyal to those whose affections he commanded, backing them unflinchingly in adverse circumstances. If there was an instance of a leader who could manage and contain contradictions, it was Vajpayee.

He was sometimes seen as a dissenter in the Sangh Parivar. But for all his occasional run-ins with the Sangh, he had no hesitation in plainly acknowledging in his “resignation” speech in Lok Sabha in 1996 that BJP omitted the Ram temple from its agenda only as it lacked a majority. Some commentators, usually those critical of BJP, found it tempting to call him the “right man in the wrong party” even as others bitterly contested his ‘liberalism’ as a facade. He himself had no qualms about his association with RSS since childhood.

Vajpayee did have his differences with RSS as when he clashed with K S Sudarshan, the Sangh chief during his prime ministership. His advocacy of ‘Gandhian socialism’ in the 1980s was at odds with Sangh’s Hindutva-oriented thinking. Yet, he acquiesced to RSS overruling a key cabinet choice when he reluctantly set aside Jaswant Singh and appointed Yashwant Sinha as finance minister in 1998. An astute politician, he could adapt, dealing with allies and writing his “musings” on year-end holidays.

Vajpayee’s instinct for moderation did not mean he was a pacifist. He ordered the Pokhran II tests almost immediately after he became Prime Minister with a parliamentary majority in 1998 — a decision essential to test the reliability of India’s nuclear deterrent. There was strong dissent at home as Congress and Left criticised the tests while US threatened sanctions. But a few years later, US president Bill Clinton’s visit to India after the 1999 Kargil war signalled a correction in a historic ‘pro-Pakistan’ tilt. The India-US nuclear deal sealed by the UPA was a culmination of Pokhran II.

In a long political career, Vajpayee scored several firsts not associated with non-Congress PMs, often seen as birds of passage, products of fractious coalitions and, on occasion, supported by Congress. Vajpayee established BJP as the alternative pole in politics after Congress had argued, with some justification post the Janata experiment collapse in 1977-80, that its opponents simply lacked the ability and temperament to lead the nation. Vajpayee disproved this with the Pokhran tests and the Kargil war, where he showed steely determination to bear body counts even as his decision not to enlarge the conflict beyond the LoC proved crucial in winning international opinion. He unleashed India’s biggest peacetime mobilisation ‘Op Parakram’ after the attack on Parliament in 2001 that ended in Pakistan agreeing, for the first time, to prevent terror attacks launched from territory under its control. Though violated often, the agreement has been a basis for subsequent diplomacy. An instinctive reformer, he backed privatisation and promoted de-regulation.

His initiatives in J&K and attempts to normalise ties with Pakistan stand out. He surprised the foreign ministry establishment by reaching out to Pakistan with his “hand of friendship” speech in 2003 after nimbly sidestepping Pervez Musharraf’s ambush at the Agra talks in 2001.

After the saffron patriarch’s health deteriorated following a stroke in 2009, and he faded from public gaze, the decade-long UPA rule before Narendra Modi led BJP back to office dimmed Vajpayee’s tenure in popular memory. Many do not remember the eventful coalition Vajpayee led from 1998 to 2004 which included a dramatic ouster from office after losing a Lok Sabha trust motion by one vote in 1999, victory in the Kargil war and a triumphant return to office. Or his dexterous diplomacy, as when he avoided committing troops in Afghanistan; in fact, he stoked domestic opposition to the idea and leveraged it to say no to US. Or when he summed up the impending US war on Saddam Hussain, observing “mahashakti ko mahasaiyam dikhana chahihe (a superpower must display great restraint)”.

As PM, he deepened economic reforms and expanded India’s foreign policy footprint with partnerships with the US and Russia and made terrorism the focus of relations with Pakistan even while he pragmatically recognised the Islamic republic’s reality. His speech in Lahore and his comment at the Minar-e-Pakistan in 1999 made it clear that he saw the creation of Pakistan as irreversible and also felt its stability was in India’s interest.

Opponents often wondered at Vajpayee’s ‘sixth sense’ in politics, an instinct that made him sceptical of the decision to call early Lok Sabha polls in 2004. Though he was persuaded by senior colleagues that big wins in Rajasthan, Madhya Pradesh and Chhattisgarh in the winter of 2003 could be the launchpad for a national election, he was never quite convinced. It would have been better to have added an ally or two, he mulled in an interaction with TOI during the 2004 Lok Sabha campaign. Ironically enough, the decision to break with DMK for an ill-starred alliance with AIADMK, jettisoning AGP in Assam and snapping ties with INLD in Haryana contributed to BJP’s defeat along with a misplaced ‘India Shining’ campaign.

Vajpayee believed themes of progress and national pride could be sufficiently emotive, and he tended to de-emphasise the Ram temple agitation even as he was scathing in attacking ‘psuedo-secularism’. He was not in Ayodhya on the day Babri Masjid was demolished. Yet he made no secret of where his heart lay, once saying the opposition seemed “disappointed” at BJP excluding contentious issues to form coalitions. Asked about his views on conversions, he simply observed that conversions lead to re-conversions.

The 1996 ‘resignation speech’ was to be the basis of the BJP campaign two years later when Vajpayee, marketed as ‘the man India awaits’, won the election with a coalition that had the mercurial J Jayalalitha. The government got to a rocky start with AIADMK withholding its letter of support and ended with Amma bringing the government down. Pakistan’s sneak attack in Kargil turned things Vajpayee’s way as he responded with vigour and determination, committing Army troops to retake the heights. Vajpayee returned to office with a larger coalition, one in which no one partner held the government to ransom.

His mild manner could disguise a sharp sense of personal honour. He once responded to Sonia Gandhi’s campaign speech suggesting he had been untruthful, stating he had never lied in public life. He clashed with her in a Lok Sabha no-confidence vote discussion, referring to her denouncing his government as “insensitive, incompetent, corrupt” and having “betrayed the mandate” to tick off Sonia. “Is this your assessment of people who are working in the political sphere shoulder to shoulder with you?” he asked.

A master orator in Hindi, Vajpayee loved the big stage, using satire to drive home his point. He was an adept parliamentarian, once reading out taped conversations of H R Bhardwaj, a minister in the P V Narasimha Rao government, deriding cabinet senior Arjun Singh. Then again he defused a crisis caused by Ram Jethmalani’s resignation as law minister by simply saying that as PM, he had the prerogative to choose his ministers.

Vajpayee was at his best campaigning, striking a chord with audiences, who came to hear him even when BJP, and earlier Jan Sangh, did not win elections. It was his ‘X factor’, the ability to sway voters outside the core Hindu vote, that prompted L K Advani to declare him prime ministerial candidate. Vajpayee’s relationship with Advani had its downs, with differences — fanned by camp followers — spilling out in public. At the same time, it was Advani who had once picked the phone to instruct RSS that a damaging statement by its chief K S Sudarshan be withdrawn immediately.

Vajpayee came close to seeking Narendra Modi’s removal as Gujarat CM after the 2002 riots, only to be thwarted by a rebellion at the BJP national executive in Goa backed by Advani. Finding himself outnumbered, Vajpayee deferred to the majority opinion. As foreign minister in the Janata government, BJP president, leader of opposition and PM, Vajpayee made his mark as a leader of substance who could use a turn of phrase or a pause to speak volumes.