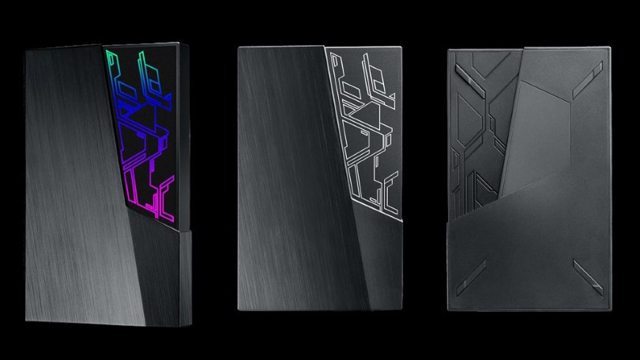 The most important features of an external hard drive are its reliability, speed, and how quiet it is in operation. How it looks doesn’t really matter as most people simply hide them away. Asus, however, wants to offer a storage device that’s a bit more expressive.

As Tom’s Hardware reports, the Asus FX External Hard Drive includes all the standard features you’d expect from an external storage device in 2018. Data transfers are handled using a USB 3.1 Gen 1 connection, there’s bundled software for setting up automatic data backups, support for 256-bit AES encryption and data compression, and 1TB or 2TB models available. It’s the casing for the drive where Asus did something a little different, though.

The casing has been created using five-axis engraving and double injection molding. The end result is a very grippy case that won’t slide around, but also won’t easily get scratched. The finish is such that fingerprint smudges are prevented, too.

The five-axis engraving allowed Asus to add a “futuristic pattern” to one corner of the drive. Underneath this area Asus included the lights required to allow the drive to be Aura Sync compatible.

Aura Sync RGB lighting technology allows an equipped device to react with a light show based on what’s happening on your PC. For example, if music is playing, Aura Sync-enabled gadgets will react with a light show, the same happens if you’re playing games. If you’d prefer more informative lighting changes, Aura Sync can react to temperature changes so as to give a clear visual sign your CPU or GPU is getting very hot.

Aura Sync is already integrated into a number of Asus motherboards, keyboards, mice, and even headsets, but now we can add an external hard drive to the list. Unfortunately, we don’t yet know when Asus plans to make both the 1TB and 2TB versions available or how much they will cost. Hopefully the premium on the price isn’t too high for that reactive lighting.