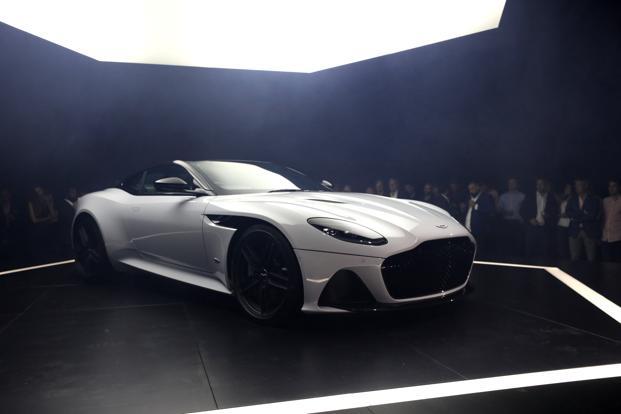 Based on Formula One styling, the $304,995 coupe will replace the Vanquish, a so-called super-grand touring two-door that Aston Martin has made since 2001. The new car revives two historic nameplates from the Aston Martin line: the DBS title first appeared in a line of coupes starting in 1967, while Superleggera, which means “super light” in Italian, hasn’t been used since the DB4 Superleggera stopped production in 1961.

The $304,995 Aston Martin DBS Superleggera will replace the Vanquish, a so-called super-grand touring two-door that Aston Martin has made since 2001. Photo: Chris Ratcliffe/Bloomberg

The new car, which Aston privately showed to a small group of journalists in New York, is indeed light, with a long, swooping body sculpted out of carbon fibre, Superleggera-specific 21-inch alloy wheels that look like slim tree branches forking, and an F1-inspired, double front diffuser that generates the most downforce (397 pounds) of any production Aston Martin car ever. It weighs 267 pounds fewer than the last Vanquish. And it looks like a beautiful song. The curvaceous DBS Superleggera will undoubtedly go over even better than the aggressively redesigned Vantage (a smaller coupe model) that Aston showed last year, which, with a gaping black grill and preference for electric-yellow exterior paint, has polarized auto critics and insiders. 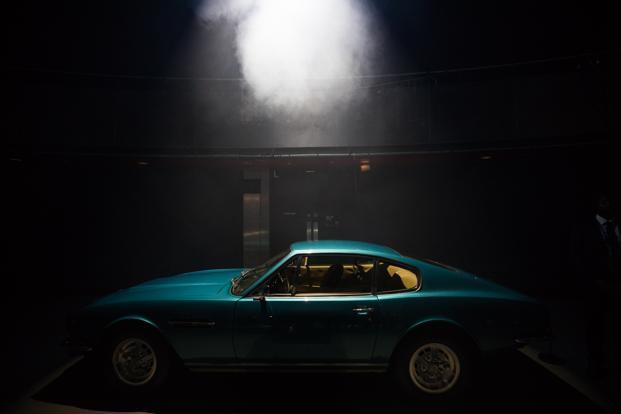 An Aston Martin DBS V8. The DBS Superleggera revives two historic nameplates: the DBS title first appeared in a line of coupes starting in 1967, while Superleggera hasn’t been used since the DB4 Superleggera stopped production in 1961. Photo: Chris Ratcliffe/Bloomberg

Both of those cars are part of the automaker’s Second Century Plan, in which Aston Martin promised seven new cars in seven years. Aston chief Andy Palmer announced the plan in 2015 as a way to make the company an annual profit-maker, something it has not achieved with much consistency through its 103 years.

The DBS Superleggera has a bi-turbo, 5.2-liter V12 engine that will be the basis for all forthcoming V12 models as well, since it is highly modifiable and can allow the integration of improvements for various trim lines and future products. The engine made its debut in this year’s DB11 coupe.

It gets 715 BHP and 664 pound-feet of torque—an astounding amount, considering that even 10 years ago only the most expensive, crazy-looking hypercars crested the 700 BHP mark. This one looks as if it could saunter down a high-fashion runway. It will give the 789 BHP Ferrari 812 Superfast a firm challenge for dominance within the set. (The 812 Superfast, by the way, is the only other front-engine, rear-wheel drive, luxury super GT car on the market today. The British company is targeting Ferrari in other ways, too.) Zero to 62 miles per hour in the Superleggera is 3.4 seconds. Top speed is 211mph. 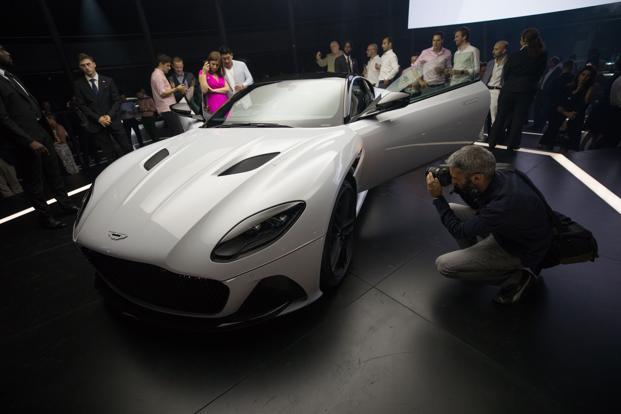 The DBS Superleggera has a bi-turbo, 5.2-liter V12 engine, generating 715 BHP. The car is capable of scorching a highway at 211mph and wouldn’t be out of place on a high-fashion runway. Photo: Chris Ratcliffe/Bloomberg

The interior of the debut model I saw left more to be desired. It combined so many different stitching, wood-working, carbon-fibre, leather, and detailing options that the cabin of the car seemed more like an all-you-can-eat buffet than a Michelin-starred dinner. If you want to see all the options offered for signature touches—simultaneously, in the same car—just slip behind the wheel. But no worries. Aston offers ample elegant and luxe custom leather and alcantara options, and the potentially cool performance seats and steering wheel come standard. The chaos inside is nothing that a small dose of taste and restraint can’t fix.

Executives say performance behind the wheel is “dialled up a notch”, compared to that of the DB11, with tighter suspension, three driving modes to suit individual driving styles, and firmer stability and traction settings, though a Bloomberg test drive will have to verify this difference later this year. If it drives half as well as it looks, we are all in for a treat. Consumer deliveries start this winter.