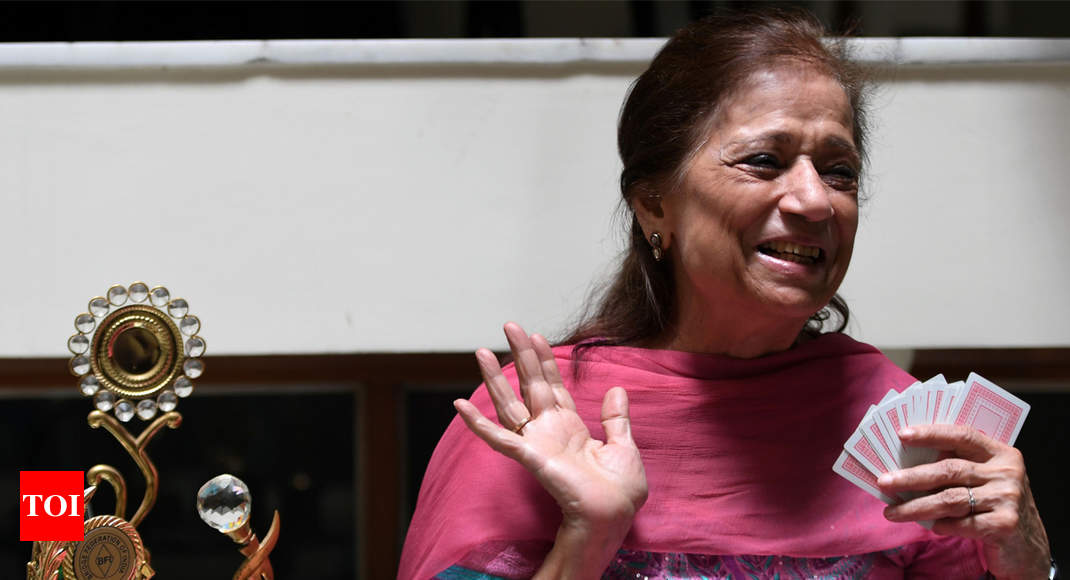 NEW DELHI: Rita Choksi says yoga and breathing exercises have kept her sharp as the Indian grandmother goes for gold at the age of 79 — just one of many elderly contenders in the Asian Games bridge competition.

Choksi may be India’s oldest athlete at the Games in Jakarta, but she’s one of several 70-plus bridge players as the cerebral card game makes its debut at the regional Olympics.

Bridge is one of the more surprising sports among the 40 at the Games, which also include paragliding and jet-skiing — alongside Olympic events like swimming and athletics.

At the other end of the generational scale, video games or eSports will make their debut as a demonstration event, before becoming a full medal sport at the next Games in 2022.

Choksi is one of four septuagenarians in India’s bridge team, which has an average age of 60. As well as her morning yoga routine, she spends three hours a day playing bridge online.

“I am looking forward to it. As far as age is concerned, I never felt that old, that was my problem,” said Choksi, who will turn 80 in October.

“They kept saying that there other people much younger but they feel old,” she told AFP at her home in what, coincidentally, was once the athletes’ village for the 1982 Games in New Delhi.

Choksi took up the sport in the 1970s and has represented India at international tournaments in China, Pakistan and the United States. She secured her Asian Games place at a contest in Goa.

“I played well in Goa and the president of the Bridge Federation of India felt I am good enough. They selected nine ladies out of the 24-member bridge team,” Choksi said with pride.

Choksi is confident that bridge will contribute to India’s medal tally as the country has internationally ranked players. China and Indonesia are also strong.

“Bridge is a different game, it’s a mind game and there is no age barrier in this,” Anand Samant, secretary of the Bridge Federation of India, told AFP.

“Rita is part of a mixed event and her male partner is also in his sixties.

“We had a fair selection process at various camps and the teams were selected after proper evaluation.”

Anand said every country faces some uncertainty as bridge is contested for the first time.

Choksi said that while some of her team-mates take prescribed pills to stay healthy, she remains fit through more natural means.

“I am more into Ayurveda (traditional Indian medicine) and by the grace of God I have no ailment. I do yoga in the morning and do breathing exercises,” said Choksi.

“I go to bed very early and I wake up early and keep myself busy all through the day.”

Choksi, whose two sons are settled in London, has cards as her best friend after the death of her second husband, who was also her most successful bridge partner.

“I play on Bridge Base Online on my computer where lots of friends invite me and we spend a lot of time there,” she said.

“Lot of Turkish people are there and some partners I have are from Egypt.”

“I have played a lot in Pakistan. I met Imran Khan once in London and talked about bridge and golf,” she said, referring to the Pakistan cricketer-turned-politician.