Asian Games: First-timers hungry to make their mark for India | SPORTS
Categorized as
139
Tagged as
From sweeping a dhaba floor to playing for gold at AsiadHima DasIndia hoping to overtake their best-ever medals tallyJitu RaiManu BhakerNeeraj ChopraSania Mirza
Related

The Indian contingent in Indonesia is full of young talented individuals who have shown no stage fright on the world stage. The likes of teenage shooters Manu Bhaker, Elavenil Valarivan and Anish Bhanwala have generated a lot of excitement while track and field stars Neeraj Chopra and Hima Das have proved Indian athletes do not go into an international tournament just to compete. This will be the first Asiad for many of these young athletes, and the key to winning medals would be not to get overawed.

Manu Bhaker’s gold medal count at the international stage stands at 10, which includes top positions in the shooting World Cup and the 2018 Commonwealth Games in Gold Coast. The 16-year-old will take part in three events at the Asiad, and she remains unperturbed with all the hoopla that surrounds her. ” Main sirf khelne se matlab rakhti hoon, bas (I am only concerned about my shooting). Pressure is there, but it’s there in every field,” a composed Manu tells TOI. “Frankly speaking, at big events likes the Asian Games, if I manage to win gold, it’ll help my country to be among the top nations.”

Earlier this year, during the Gold Coast CWG, Anish Bhanwala became the youngest Indian to win a gold medal in a Commonwealth Games at the age of 15. He hasn’t turned 16 yet and will be participating in his maiden Asiad. “I know winning gold in the Asian Games won’t be easy but my target is to clinch top spot,” he says.

READ ALSO: From sweeping a dhaba floor to playing for gold at Asiad

A third teenager, rifle shooter Elavenil Valarivan, will be another strong contender after landing two junior World Cup gold medals this year. She is 19.

A clear pattern has started to emerge. The country is no longer dependent on its experienced stalwarts to make headlines. At the Asiad, 35 per cent of the Indian contingent is between the age of 15-23.

Javelin thrower Neeraj has been bestowed with the honour of being the country’s flag-bearer during the opening ceremony. The 20-year-old won gold in his maiden CWG and will look to repeat the feat in his first Asiad too. “The last 4-5 months have been very productive. I am feeling good,” he said.

For middle-distance runner Hima Das, who created history by becoming the first Indian to win gold in a track event at the IAAF World U-20 Athletics Championships, this will be her debut Asiad. She is another bright medal prospect for India. Other first-timers like athletes Muhammed Anas, Jinson Johnson, teenage golfer Aadil Bedi, boxers Amit Panghal and Gaurav Solanki who have the potential to bring laurels for the country. 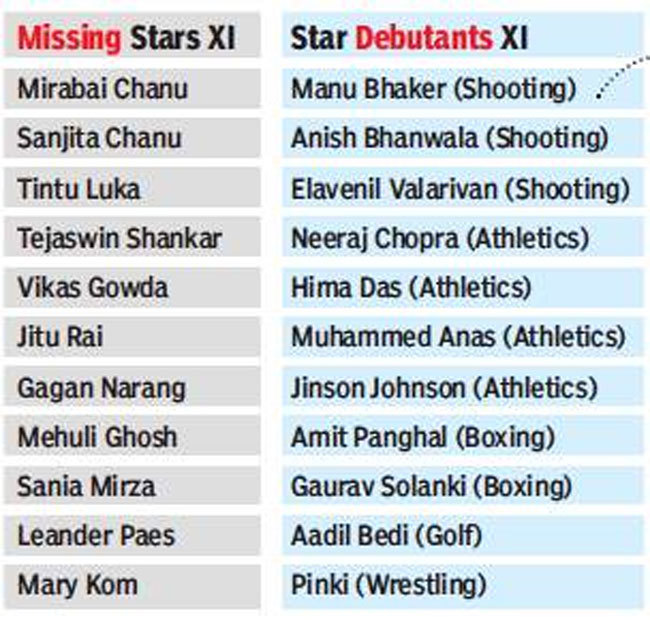 Weightlifters Mirabai Chanu and two-time CWG gold medallist Sanjita Chanu will miss the event. Mirabai is suffering from a back injury, while Sanjita was provisionally suspended for testing positive for an anabolic steroid in May. Shooters Gagan Narang, Jitu Rai and Mehuli Ghosh won’t be training their guns in Jakarta. MC Mary Kom has also pulled out.