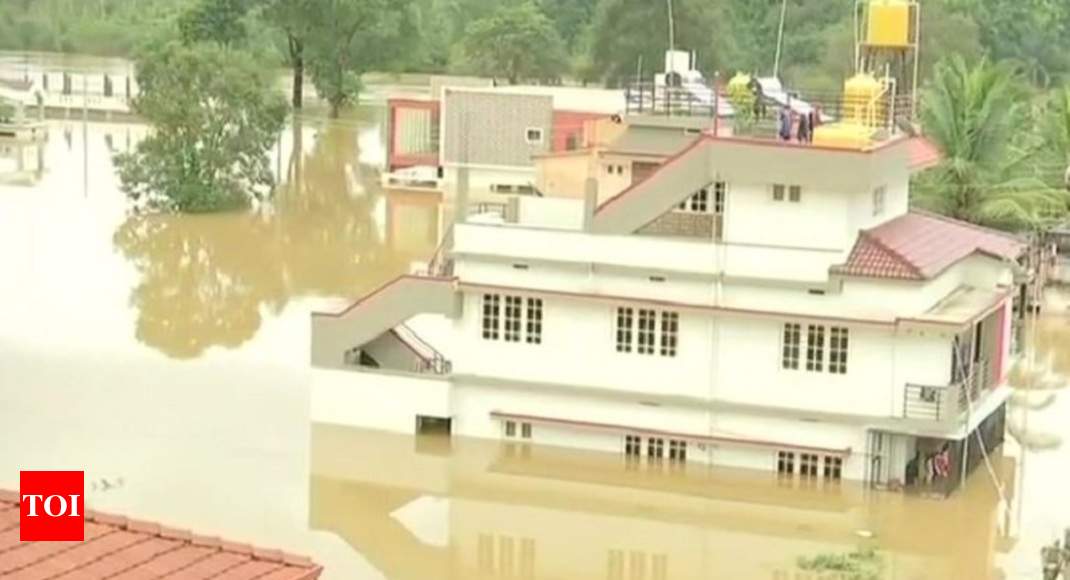 BENGALURU: The Army has joined operations to rescue people stranded due to floods and landslides in rain-battered Kodagu district bordering Kerala, officials said on Friday.

All major roads leading to Kodagu are blocked and a massive rescue operation has been launched, they said.

Multiple agencies, including Army’s one column of Dogra Regiment with 60 personnel, are involved in the operation.

The Army’s Engineering task force, comprising 73 personnel with boats and other rescue equipment, is on its way to the area, officials said.

Inclement weather led to an Indian Air Force’s mission being aborted, officials said, adding that it would be attempted tomorrow morning from Mysuru using M17 helicopter.

They said 873 people have been rescued and brought to safety and 17 relief camps set up providing shelter to 573 people.

According to data available, six people have died in Kodagu on August 14 and 15 and large number of houses and public property damaged, officials said.

Several districts of coastal and Malnad regions of thestate like Dakshina Kannada, Udupi, Chikkmagaluru, Kodagu, parts of Hassan and Uttara Kannada, have been facing the brunt of incessant rains in the last few days.

Chief Secretary Vijay Bhaskar informed Chief Minister Kumaraswamy about the rescue operations in the flood and landslide-hit districts of coastal and Malnad regions, it said.

The statement said the chief minister was also constantly in touch with the district in-charge ministers who are stationed in their respective districts to monitor the rescue operations.

Kumaraswamy has convened a high level meeting tomorrow to discuss the flood situation and relief work.

He had yesterday announced a grant-in-aid of Rs 200 crore to the affected districts for relief work.

The chief minister has also directed the district administrations to estimate the losses and submit a report in a couple of days, following which the state government is expected to approach the Centre for help.

Meanwhile, 16 railway staff, stuck at Yedakumeri railway station near Sakhaleshpur in Hassan district due tolandslips and rains since August 14, have been rescued.

The chief minister has tweeted, confirming their rescue.

Some trains have been partially cancelled on some routes due to landslides, the South Western Railway said.

Union Minister D V Sadananda Gowdasaid he will visit rain-hit districts for the next two days to take stock of the situation, as the Karnataka Pradesh Congress Committee constituted three teams to assess the situation.

Even as parts of the state and neighboring Kerala are being ravaged by rains, officials said at least 16districts in Karnataka have recorded deficient rainfall with the government mulling declaring them drought-hit.