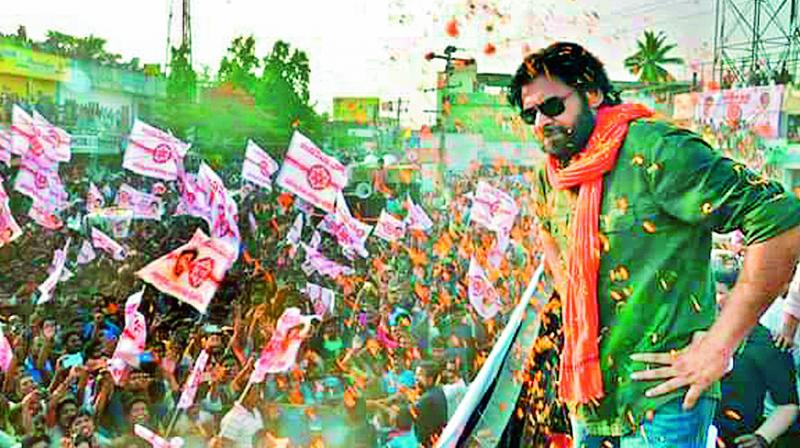 Rajahmundry: In the hope that it will inculcate the fighting spirit, the Jana Sena is encouraging its members to wear military-style olive green attire.

Jana Sena chief Pawan Kalyan wore military olive green shirts during his tour of North Andhra recently and justified it at a public meeting in Itchapuram by saying that it reflected the fighting spirit that was there in the land of Srikakulam.

He said that to get justice, people must fight against the Telugu Desam government which has failed to fulfil its poll promises, and against the Centre, which has failed to implement the AP Reorganisation Act, 2014, which called for according special category status to AP.  He even led a short march ‘Kavathu’ of party leaders and youngsters to the dais at the public meeting to instil confidence among them to fight for their rights.

The Jana Sena chief has made it compulsory for party leaders and youngsters to stage a short march of three to five kms during every public meeting he addresses. Taking a cue from Mr Kalyan’s new olive green outfits, the party leaders are encouraging young party activists to wear the same.

The shirt has a standardised pattern like a uniform — full or half sleeves, double pockets and shoulder flaps on either side. It costs Rs 300 plus Rs 100 for stitching.

Mr Sridhar said, “Taking our party chief Pawan Kalyan as our role model, we are encouraging our activists to wear the same while reaching out to the people so that they can feel such spirit and fight for the rights and welfare of people and also against any injustice being meted out to the people on any issue.”