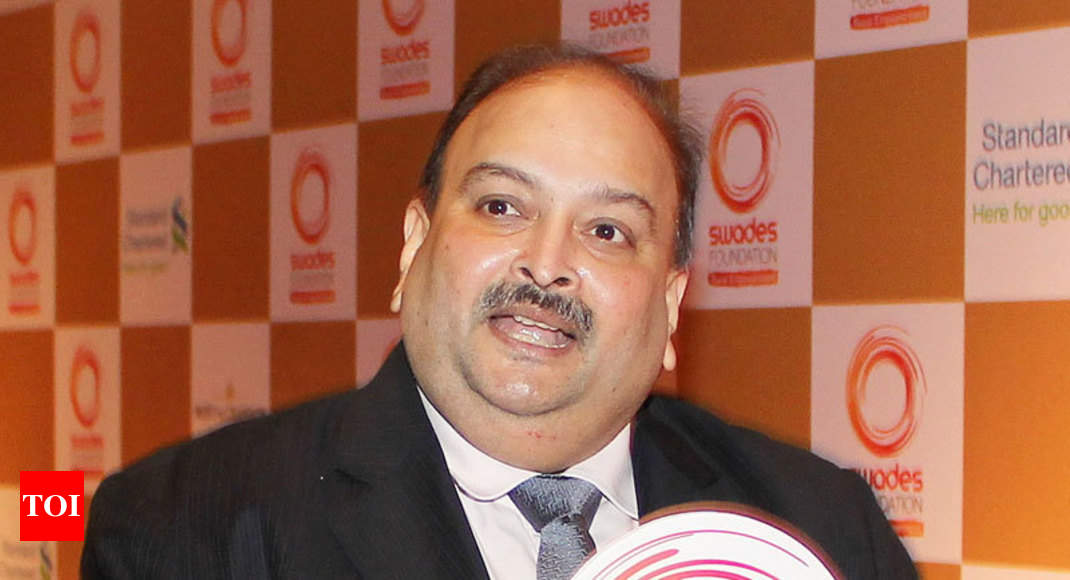 NEW DELHI: The Antigua government has indicated that it may consider “a legitimate request” from India to send back the uncle of fugitive diamantaire Nirav Modi, Mehul Choksi, who has taken citizenship there, according to a newspaper report in that country.

The Daily Observer today quoted a Cabinet press briefing issued by the Chief of Staff, Lionel “Max” Hurst, to state that Antigua and Barbuda government will make every effort “as per law” to honour a “legitimate” request from India.

The issue of Choksi, a fugitive from India involved in an alleged banking scam worth over $2 billion, getting citizenship in Antigua in November last year was discussed in a Cabinet meeting of Antigua and Barbuda government, the newspaper said.

A CBI request, India’s nodal agency for Interpol matters, to issue a Red Corner Notice against Choksi is pending with the international police organisation and is likely to be granted soon.

The Cabinet underlined that they do not have extradition treaty with India and that Choksi has not been charged for any crime, it reported.

The paper also stated that the Cabinet noted that no request has been received by the Antigua and Barbuda government for any action against Choksi.

The Citizenship by Investment unit of Antigua faced criticism from the paper for allowing Choksi to get passport of Antigua in November last year. The unit had informed the paper that Choksi’s request was allowed after “due diligence” and detailed background check from Interpol.

The CBI has denied that Interpol ever approached it regarding background checks on Choksi, who was facing inquiries from various agencies last year.

It also noted that India is a friendly country, an “ally”, and that it had helped Antigua in past on several occasions and it was a time to reciprocate.

“Beyond that, India is an ally. They have provided assistance to us in the past, and they have been tapped to provide assistance in the future. Most recently (as in April of this year), we sought their technical assistance in the areas of health and the management of public finance. Will we now turn our backs on them and give safe harbour to a fugitive from their justice system?,” an editorial in the paper said.

Meanwhile, the Enforcement Directorate has moved to a special court in Mumbai seeking to declare Nirav Modi and his uncle Choksi ‘fugitive economic offenders’ which will enable them to seize their assets in India.

Nirav Modi and Choksi are being investigated by the ED and the CBI after it was detected that they allegedly cheated the Punjab National Bank of more than Rs 13,400 crore with purported involvement of a few of the lender’s employees.

The scam, which reportedly began in 2011, was detected in January this year, after which PNB officials reported it to the probe agencies.

Choksi and Modi fled the country in January this year nearly a fortnight before the scam was detected.

Choksi’s actions show that he had planned his escape and subsequent life in advance knowing that the scam would blow up after the retirement of PNB employee Gokulnath Shetty, who was allegedly helping him with renewal of letters of undertaking, sources said.

He escaped the country on January 4 on an Indian passport and took the oath of allegiance in Antigua on January 15, they said.

Next day, his firm approached the Brady House branch of the Punjab National Bank seeking renewal and issuance of letters of undertaking which were denied as the officer concerned sought cash guarantee for issuing these notes, a CBI FIR in this connection alleged.

The executives told the officer that they have been taking these letters over last several years without any demand of such guarantee, it said.

The officer could not find instructions for such LoUs in the bank’s system which led to a detailed scrutiny. It is then that the alleged scam surfaced prompting the bank to approach the CBI with a complaint and an FIR was registered on January 31.

An LoU is a guarantee given by an issuing bank to Indian banks having branches abroad to grant short-term credit to an applicant.

Choksi allegedly swindled Rs 7080.86 crore, making it possibly the biggest banking scam in the country, the FIR has alleged.

Choksi and his companies allegedly availed of credit from overseas branches of Indian banks using the fraudulent guarantees of the PNB given through LoUs and letters of credit issued to Brady House branch which were not repaid bringing the liability on the state run bank, the officials said.

A chargesheet filed in a special court in Mumbai after a three-and-a-month probe alleged that Shetty, a deputy manager in the PNB and arrested by the CBI, received Rs 1 crore from the companies of Choksi to issue LoUs to his companies, they said.