Thoothukudi: Rajinikanth will visit people affected in police firing in Thoothukudi on Wednesday.

Reaching Thoothukudi airport by 10.30 am, Rajini would visit the injured persons at the hospital, said  A. Joseph Stalin, Thoothukudi district secretary of Rajini Makkal Mandram. “As this would superstar’s first public political programme we expect a huge crowd and hence asked the Tirunelveli range DIG for protection,” added Stalin.

District superintendent Murali Ramba said VIP protection would be given to Rajinikanth.

According to the police officer, only four were permitted to accompany him in to the hospital. He has been permitted only to visit government hospital and not to visit families of any victim.

In a press conference here, Rajinikanth emphasised on the need to save the industrial climate of the state, which he says will go through a lean patch if protests continue.

“Some people are protesting for good, some protests are being instigated. People should be very careful.If Tamil Nadu becomes a land of protest, no businesses will come here.There won’t be job opportunities. The poor will suffer a lot. Already farmers here don’t have water. If there are no jobs, it will become very difficult. When they are protesting, it should be done with caution. Even when the government is giving permission to such industries, they should see all the norms and conditions and do it properly. If something happens, courts should be approached. If we keep saying protest protest, it will become very difficult. Politicians should bear this in mind,” he said.

On the violent protests which rocked the district on May 22, he said that it was the doing of ‘anti-social elements’ and ‘toxic germs’ which he says, has increased in the Tamil Nadu society. He also said that people are being instigated to turn violent by these elements.

He condemned Sterlite Copper plant and said, “Government has said that it(the factory) has been shut and will not be opened. If Sterlite goes to court, they are not human. Even those in court are human. They will not win, they should not be allowed to win, they will not go.” 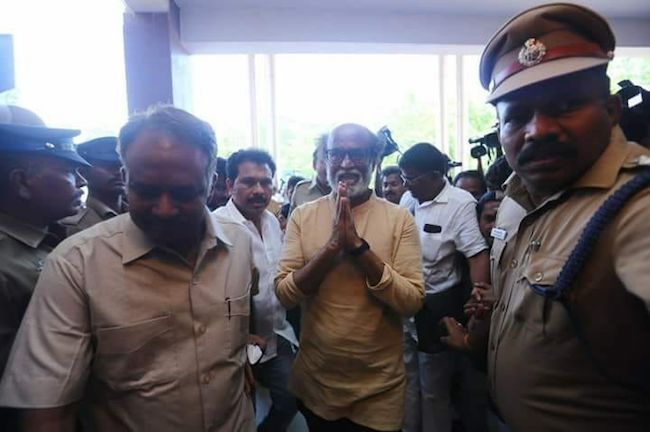 On the police firing which claimed 13 lives, the actor said, “Totally they (police) were confused… The police did not expect this at all. They did not expect people to indulge in such violence. I said this before, I’m saying it again – people who raise their hand at the police should not be spared. We should not leave them. If we leave them, then who will protect us? Tell me who will protect us? In these 7 crore people, how many are policemen? We have to be very careful. There were video cameras, we must look at the footage properly and find out who hit the police. We need to identify each and every person who hit the police and we must put their photos in the papers, in the TV. We have to call them anti-social elements and we must book them.”

On why he hasn’t called for the resignation of the Chief Minister, he said, “If we keep saying resign for everything, what will come of it? I don’t wish to speak about that. From now on, they should be careful. This was a big mistake. Let’s see.”

Regarding the assembly session on Tuesday being called off, he said, “There are people politicising everything. They think people don’t know anything. People know everything. When the time comes, they will show justice.”

The superstar also made it clear that he had no faith in the one man commission appointed to investigate the matter.

“No, I don’t have faith in the one man commission. It needs to be thought about. This is a big lesson. Carelessness is a big reason.”