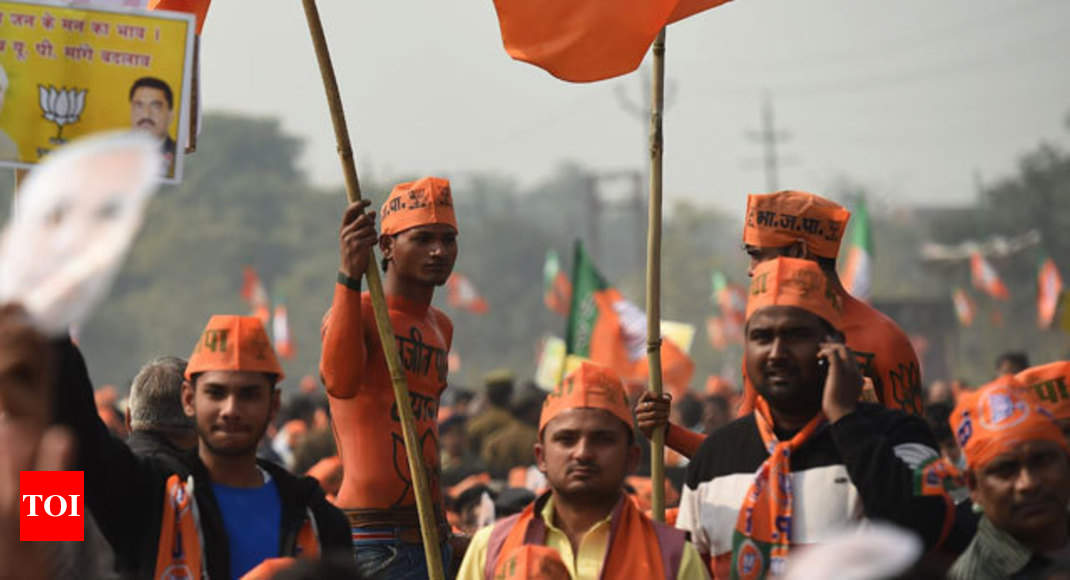 NEW DELHI: Several Opposition parties have begun work on stitching up state-wise pre-poll alliances against the BJP for the 2019 Lok Sabha elections to supplement their electoral strength and minimise BJP gains. Leaders involved in the exercise have said that prospects of state-wide alliances have brightened in seven states where the BJP and allies made impressive gains in 2014.
States where Opposition parties are working for separate anti-BJP pre-poll alliances are Uttar Pradesh, Bihar, Maharashtra, Karnataka, Jharkhand, Tamil Nadu and Jammu and Kashmir. They account for 255 Lok Sabha seats, almost half the strength of the House. The BJP alone won nearly 150 seats in 2014, while its allies added another dozen-odd seats here.

Apart from the ‘Modi wave’, the division among anti-BJP parties helped the saffron surge in in 2014, except Tamil Nadu. Though BJP won just one seat in TN, the AIADMK which won 37 of the 39 seats has been an informal BJP ally inside and outside Parliament. Sources familiar with the exercise said though announcements of alliances and seat-sharing formula will come about only after there is clarity on the Lok Sabha poll schedule, concerned parties have converged on the need for pooling their votes.

It will be a kind of realistic re-adaption of anti-BJP alliance in 2004 before the UPA secured the support of Left and other parties after polls. Even in 2004, the alliance never projected a prime ministerial candidate.

“The focus is again in working towards maximum possible statewise alliances, leaving the rest with the scope for likely post-poll coming together against BJP,” a senior Opposition leader said. The shared urgency to checkmate BJP in its electoral reservoirs means individual parties agreeing to show pragmatism in seat adjustments to avoid split of anti-BJP votes. While SP-BSP combine will take the lion’s share in UP, where BJP won 71 of the 80 LS seats, the Congress leadership, posturing notwithstanding, would settle along with RLD as minor partners. In the forthcoming Madhya Pradesh assembly elections, the Congress is likely to accommodate the SP and BSP in a limited number of seats. If this alliance works out, it could be replicated in the Lok Sabha polls in MP.

In Bihar, where BJP and allies won 31 out of 40 LS seats, RJD, Congress, NCP and outfits of Sharad Yadav and Jitan Manjhi could come together. These parties will respect sentiments of coalition leader RJD which has rubbished the possibility of JDU’s ‘ghar wapsi’. In Jharkhand, where BJP won 12 of 14 LS seats, efforts are on for a JMM-Congress-RJD-Marandi alliance. Notwithstanding hiccups the Kumaraswamy government faces in Karnataka, where BJP won 14 of 28 LS seats, JDSCongress hope to fight LS polls together and accommodate BSP too. Tamil Nadu could see revival of the DMK-Congress alliance, where some other parties including Kamal Haasan’s outfit would be included.

In Maharashtra, where BJP won 23 and Shiv Sena 18 of the 48 Lok Sabha seats, Congress-NCP have in principle agreed to have an alliance while accommodating smaller anti-BJP parties such as RPI (Gavai), Raju Shetty’s Swabhimani Paksha, Bahujan Vikas Agadhi, CPM, SP and RPI (Ambedkar) if the demands for seats from minor partners remain realistic. After the recent Rahul Gandhi-Sharad Pawar talks, state leaders will work on the nitty-gritty of the alliance and AICC general secretary Mallikarjun Kharge is scheduled to visit Mumbai on Sunday.

With the break-up of BJP-PDP alliance, which won all six LS seats in J&K, the Opposition feels the electoral prospects of the Congress-NC has brightened. West Bengal remains the only big state where the Congress preference is not clear. National Opposition parties calculate that BJP in any case will not be able to match its hype on the ground in West Bengal.