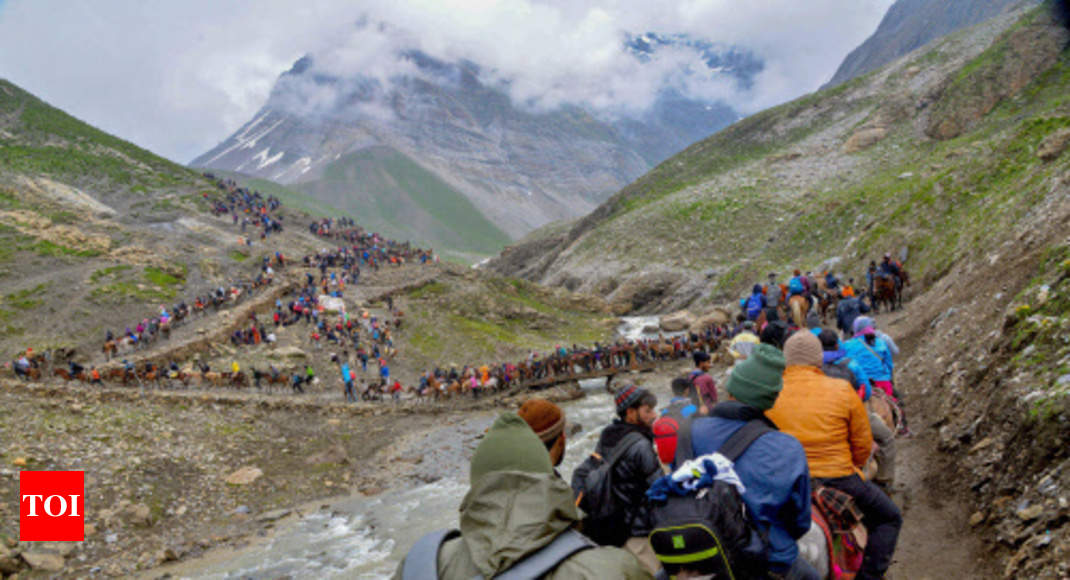 JAMMU: The Amarnath yatra resumed today from Jammu after it was suspended for two days due to inclement weather in Kashmir, with a batch of over 2,200 pilgrims leaving for the Pahalgam base camp for the 3,880-metre-high holy cave shrine, officials said.
However, the pilgrims registered for the Baltal route were not allowed to leave the Bhagwati Nagar base camp for the Valley as the authorities had suspended the yatra from the shorter 12-km track due to slippery conditions and incidents of shooting of stones, they said.

The pilgrimage from the traditional 36-km Pahalgam route resumed yesterday.

“The 8th batch of 2,203 Pahalgam-bound pilgrims, including 311 women, left in a convoy of 51 vehicles from the Bhagwati Nagar base camp at around 0240 hours and are expected to reach the base camp in Anantnag district of south Kashmir later in the day,” a police official said.

The yatra was suspended from the Jammu base camp on Thursday to avoid overcrowding in the camps in the Valley after heavy rains coupled with landslides and shooting of stones forced suspension of the yatra from the twin tracks a day earlier.

Due to the suspension of the yatra, thousands of pilgrims also got stranded in the winter capital after they reached here from across the country to undertake the annual pilgrimage in south Kashmir Himalayas.

Jammu Divisional Commissioner Sanjeev Verma said around 20,000 pilgrims are staying in various identified centres and directions have been issued to all the officers concerned for ensuring healthcare, sanitation, uninterrupted water and power supply for the comfortable stay of the yatris.

“The administration at the highest level is monitoring the safety, health and comfort of the yatris and the officers are on round the clock duty for security and other arrangements made for Yatra,” he said.

He said necessary measures were initiated to accommodate the heavy rush of yatris.

The 60-day annual yatra commenced on June 28 and 73,023 pilgrims had ‘darshan’ of the naturally formed ice-shivlingam at the cave shrine till last evening.

Meanwhile, DGP S P Vaid visited Ramban district along the Jammu-Srinagar national highway yesterday to take review of the security and transport plans placed for the safety and hassle free movement of the yatris.

The DGP visited the yatri locations and interacted with the pilgrims who were struck due to bad weather at various places on the highway, assuring all possible assistance to them, a police spokesman said.