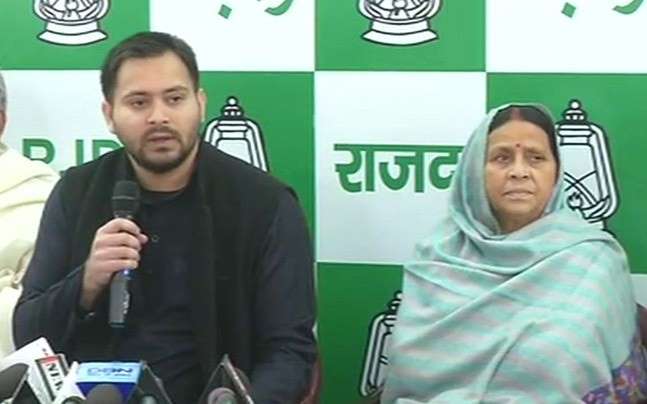 Soon after RJD chief Lalu Prasad was sentenced to three and half years jail term along with Rs 10 lakh fine in a fodder scam case, his son and former Deputy Chief Minister Tejashwi Yadav said that he was a “sher ka beta” and would not get bogged down by the judgment, instead fight out his father’s sentencing in the high court.

“I am sher ka beta (son of a lion), will not get scared with the judgment. We have our legal options open and will move the high court and challenge the decision of the special CBI court. I have complete faith in judiciary and confident that Lalu will get bail soon,” said Tejashwi Yadav.

The quantum of punishment to Lalu was pronounced by special CBI judge Shivpal Singh. Lalu was convicted by the court on 23rd December in connection with fraudulent withdrawal of Rs 89 lakh from Deoghar treasury.

Calling the decision against his father as a conspiracy of the BJP and Chief Minister Nitish Kumar, he said that his there was no chance of a possible split in the party following the court’s verdict.

“There will be no impact of Lalu’s sentencing on the RJD. The party is intact and we are ready to struggle. This is not the first time that my father has been sent to jail but the party has always remained firm,” said the former deputy chief minister.

What was, however, interesting was that Tejashwi chose to remain undeterred with the court’s decision and even thanked Nitish Kumar for the verdict.

“Thank you very much Nitish Kumar,” tweeted Tejashwi after the sentencing of Lalu.