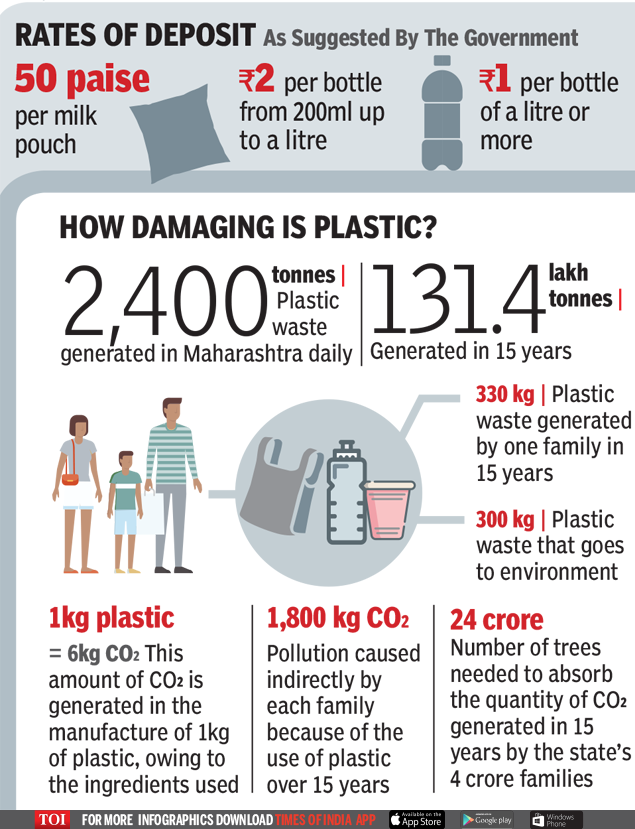 The Maharashtra government is set to roll out a buyback scheme for waste plastic PET bottles and milk pouches. It’ll be the first state to implement a buyback depository system, joining 40 other nations. Soon, returning an empty milk pouch could fetch one 50 paise. Here’s a look at what this scheme is all about.

WHAT IS MAHARASHTRA’S PLASTIC DEPOSITORY SYSTEM?
Like some other states, one time use plastic and thermocol items have been banned under the Maharashtra Plastic & ThermocolProducts Act, 2018. But the Act also prescribes a first-of-its kind scheme in the country: A buyback plan for PET bottles and milk pouches. Under it, manufacturers should charge a refundable amount when a person buys a bottled or pouched product. The deposit will be refunded once the bottle is deposited with the retailer or with reverse-vending machines.

WHO BEARS THE COST?
The scheme puts the onus of collecting and recycling bottles and pouches on manufacturers.In fact, recycling was made a manufacturing licence norm in the Plastic Waste Management Rules, 2016. Manufacturers have to submit designs on how they propose to implement the scheme. Also, the onus of tying up
with recyclers is on manufacturers. Top beverage-makers, including Coca-Cola, PepsiCo and Bisleri, have begun printing a buyback value on PET bottles
sold in Maharashtra to comply with the new regulations.

IS THERE ANY OTHER MECHANISM TO HOLD FIRMS LIABLE?
The state government has directed FMCG companies to create an escrow account or reserve fund of Rs 25,000 per lakh of multi-layered plastic packets and tetra packs under the supervision of the pollution control board to collect, recycle and reuse packs that litter public places.

WHAT IS THE CONSUMER’S LIABILITY?
A consumer must return a PET bottle or pouch to claim the deposit.If caught littering by civic and police officials,the person can be penalised. Since such microlevel
vigilance by authorities is unfeasible, the practical aim of the buyback scheme is to incentivise the return of plastic bottles/pouches, which will be of
value, at least to agents like ragpickers.

WHERE ELSE DOES SUCH A BUYBACK MECHANISM EXIST?

It doesn’t exist anywhere else in India. Overseas, it is being implemented in at least 40 countries, including the US, Germany and Norway (where 97% of PET is recycled). The United Kingdom plans to launch such a scheme soon.

TO WHAT PRODUCTS DOES THE SCHEME APPLY IN MAHARASHTRA?

As of now, it is meant for PET (polyethylene terephthalate) bottles and milk pouches. The government has asked retailers to examine a similar depository mechanism for retail packaging as well.

WHAT WILL THE RECYCLED PLASTIC BE USED FOR?

Industrial fuel, road-building (by compacting plastic) and the manufacture of dry-fit jerseys, to name a few.