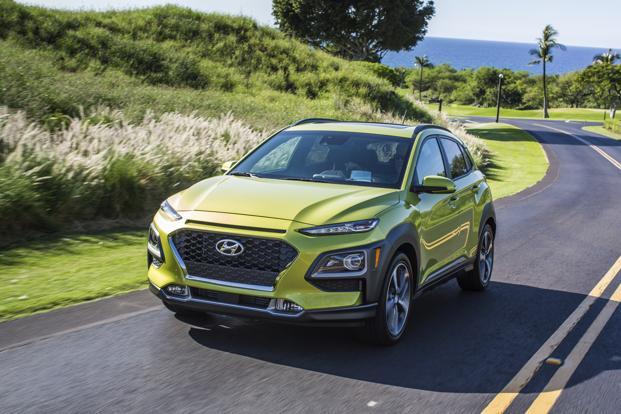 The Hyundai Kona, which is likely the compact sports SUV that South Korean carmaker plans to launch in the first quarter of 2019. Photo: AP

New Delhi: Hyundai Motor India Ltd, which launched its tall-boy hatchback Santro for the masses in 1998, is repositioning itself as a modern, premium brand after completing 20 years in India. Going forward, Hyundai plans to add superior technology features, offer premium design and leverage customer data to offer customised solutions. Apart from product, the company is also revamping its dealerships and service centres—making them more tech-savvy to enhance customer experience.

The South Korean carmaker, which gave serious competition to market leader Maruti Suzuki in India, plans to chart a new course by connecting with millennial consumers through innovating in design, technology and look and feel of its products. According to Anand, customers are willing to pay a 15% premium for a Hyundai product.

“Our last four products including Grand i10, Elite i20, Creta and Verna have made Hyundai an aspirational brand, which is reaching out to young millennials. Our focus has been to introduce features like wireless charger, telematics, Apple Car Play, bluetooth and touchscreen to make our cars truly a communicative platform,” he said.

On the communication front, the automobile firm has been running an advertising campaign Brilliant Moments which harps on the nostalgia associated with one’s first car. The digital campaign features a grandfather who is visibly disturbed to part with Hyundai Accent, his first car which helped him create numerous memories.

With time, the auto brand said that it is also changing the way it talks to customers. Keeping its long-standing association with actor Shah Rukh Khan intact, the brand will now create an interesting mix of values based and product centric campaigns. “While Shah Rukh Khan will feature in ads where company’s overall vision and social messaging like road safety will be highlighted, we will continue to launch product centric functional ads,”said Anand.

Hyundai, which grew at 8.2% in the first half of 2018 over last year, will be launching a small car (rumoured to be called Santro) ahead of the festive season in October this year. It is also slated to launch a compact sports SUV in the first quarter of 2019.

The company’s strategy of having a large number of small cars in the portfolio has clicked, with it enjoying over 16% market share in passenger vehicles. It currently has nine car models across segments, including the Eon, Grand i10, Elite i20, Active i20, Xcent, Verna, Elantra, Creta and Tucson.

Ambi Parameswaran, brand strategist and founder of Brand-Building.com, recalled that when Santro was launched in July 1998, it got a modest response. Tata Indica, which was launched in December that year, received tremendous response because it created a dissonance in the consumer brain that Maruti 800 is too small a car.

“However, Indica deliveries took time and dealers asked customers to switch to Santro and that’s how Indica’s loss turned out to be Santro’s gain. Once that shift happened, Hyundai made sure that Santro matched customer expectations. They kept improving their services and subsequently launched new models,” he said.

Hyundai also gave India many firsts—a power steering in a small car (Santro) in 1998, bringing CRDi diesel engine technology in the Accent 2002 model and creating the premium hatchback category through its i20 car model. “Initially they were lucky but they continued delivering on quality, range of cars and value for money proposition,” said Parameswaran.

Agreed Jitender Dabas, chief strategy officer, McCann Worldgroup India. “Hyundai has certainly moved up by launching more stylish and design-led models like Elite i20 and its product innovation has taken it ahead in India,” Dabas said.

“I believe Hyundai is a product success story instead of an advertising success story. They kept on innovating in design, technology and comfort in their new models so much so that they have put the pressure back on Maruti Suzuki to better its act and launch more design-led car models. Suzuki had to go beyond its dealer network and servicing promise and launch premium cars like the Vitara Brezza to maintain its leadership,” he said.