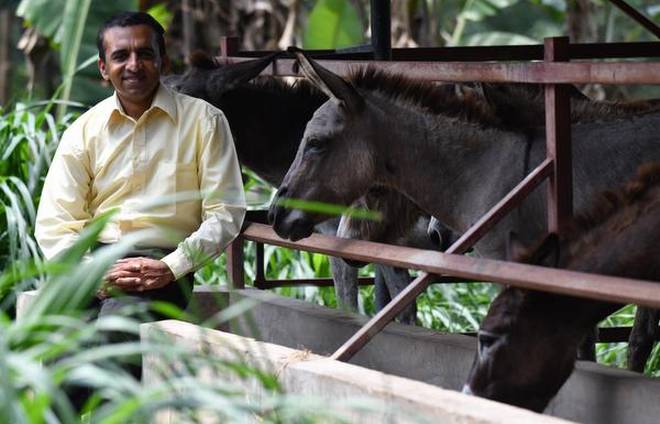 Roughly 30 kilometres east of Kochi is Kolenchery, a criss-cross of low hills, flat paddy fields, pineapple farms and rubber estates. The Muvattupuzha flows quietly amid this undulated, picturesque terrain. A short detour into the hinterland at Ramamangalam, is Aby Baby’s donkey farm, a mid-sized kraal with 19 donkeys.

It is a landscape where the animal is not seen commonly and the hardy donkeys look incongruous.

Conspicuous here they are a vital link, providing a key ingredient, donkey milk, in the production of a range of wellness and skincare products. “The donkey has centuries of history behind it. In the Bible Job had donkeys, Abraham had donkeys and all were female donkeys so it must have been nurtured for milk, which was consumed for health and used for beauty. I realised that the donkeys played an important role and were used to improve economy, to generate business. I began looking for applications, ” says Aby adding that Queen Cleopatra’s beauty bath in donkey milk is legendary.

Hailing from Kolenchery Aby studied Computer Science and started his career as an IT executive in 1996, later moving into marketing in a firm in Bengaluru. All through his professional journey he dreamt of turning entrepreneur, burning with a desire to do something off the beaten track. “I used to always think out-of-the-box since my childhood,” says the 43-year-old of his unique venture, Dolphin IBA, and talks spiritedly of the experiences that encouraged him into it. He is now set to expand with the introduction of a health mix.

Researching for natural substitutes, different from Ayurveda, Aby and his team, of 20, zeroed in on donkey milk to supplement Vitamin B3 or niacinamide, a requirement for healthy tissue.

Hence milk from the donkey is freeze-dried and used along with other natural elements to make creams, ointments and now meal mix.

Aby Baby speaks with passion of his journey so far. A trait that has stood him in good stead, he feels, is of observing the ways of successful men and women. So people with vision- company bosses, team leaders and successful personalities- unconsciously became his coaches. From them he learnt, “life’s lessons.”

Business honchos – Mosquito coil inventor Goodnight Mohan,K. Apple founder Steve Jobs, FB CEO Mark Zuckerberg, and several others became his ideals. Admiring the creative streak of inventors, of producing intelligent products- a power reducing device, a mosquito repellent and such, that went on to change people’s lives gave him a clarity that his enterprise would never be only about profit but also about helping society. And hence, Aby claims that his skincare range has creams that provide relief in acute dermal conditions.

“By making just one single product Goodnight Mohan touched the lives of people; he changed the way Malayalis respond to stimulus. His story lit a spark in me and that was the seed of my journey,” he says.

Another mantra, offered by a local businessman, and one which he treasures, was of proving oneself on home turf before venturing outside. “If you have passed the test in Kerala, you will be successful anywhere in the world,” said the entrepreneur to him.

But it is not only lessons from the corporate world that form Aby’s thought process. The Bible, he says, has been a great source of strength during times when he was down and out. A failed marriage with a beautiful woman spurred him on, too, with this business.

“Beauty can turn into vanity. But real beauty has to be supported with natural ingredients. It adds value to the personality,” he says.

Currently working on the health mix with his team of researchers Aby yet again finds direction from the Bible. “If you are willing and obedient you shall eat the good of the land,” he quotes and is currently reaching out to grains grown on African soil for his health mix.

In the last two years he has faced many hurdles but has worked around them. In the first flush 16 donkeys, Indian breed, which he bought from Tamil Nadu died, the distribution of his product fumbled and he encountered setbacks.

Negotiating these – funds, organisation, distribution, retail- he realised that if the product it good it will find its market, comparing, in his inimitable style, the product’s popularity to something niche, “like a designer shirt.”

Aby Baby is finally finding joy in his venture after receiving positive feedback from consumers. A client in Hollywood, another, a sheikh from Qatar and people locally have responded to his products convincingly.

He says, “Beauty for me is about someone with a good heart and I choose the donkey because it is at the root of nature. In our culture it is a poor man’s symbol but in Europe and America it is a rich man’s symbol. I combine both these and my work is about touching people’s lives.”