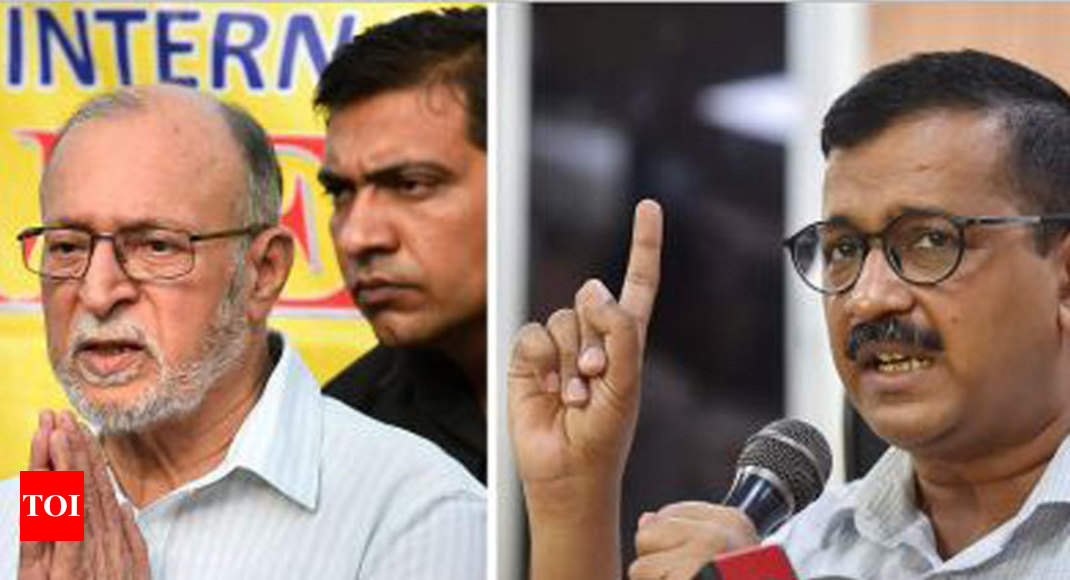 NEW DELHI: Heaving a sigh of relief over the Supreme Court verdict on the power tussle between the Delhi government and the Centre, the AAP leadership today accused the BJP dispensation at the Centre of creating “chaos” in the national capital in the last three-and-a-half years.

Delhi Chief Minister and Aam Aadmi Party (AAP) National Convenor Arvind Kejriwal welcomed the apex court verdict as a “big victory” for the people of the national capital and democracy.

“If Modi govt had not withdrawn the powers of elected govt through illegal orders, precious three years would have been saved. People of Delhi are grateful to judiciary. Today’s order reinforces people’s faith in judiciary (sic),” he tweeted.

If Modi govt had not withdrawn the powers of elected govt thro illegal orders, precious three years wud have been s… https://t.co/qnzC9TrzVu

The news of a favourable judgement by the Supreme Court led to a festive scene at the AAP office on DDU Marg with party workers dancing to drum beats and distributing sweets. Partymen also celebrated at Kejriwal’s residence.

He drew a parallel between the previous Sheila Dikshit-led Congress government in Delhi and the current AAP dispensation and pointed out how the ruling party was obstructed from working.

“AAP Govt was formed in Feb 2015, three months later, in May 2015, Modi Govt brought this notification which took away ‘services’ from AAP Govt. This means Sheila Dixit Govt had all control over her officers/employees, Kejriwal Govt was left with zero control (sic).”

“Modi Govt was formed in May 2014 & just 2 months later, Modi Govt brought a notification which took away powers of Anti-Corruption branch. Means Sheila Dixit had ACB for 15 years but was taken away because Modi was too scared of Arvind Kejriwal and his ACB (sic),” Bhardwaj said in a series of tweets.

He also said the provision of aid and advice of the elected government was binding on the Lieutenant Governor (LG) during Dikshit’s rule, adding that it was done away with after Kejriwal became the chief minister.

“Under Sheila Dixit Govt, Aid & Advice of Elected Govt was binding on LG. LG was not free to reject schemes. For Kejriwal Govt, LG is free to take decisions, has been rejecting all important decisions of Govt. CCTV, Door step delivery of Ration, Muholla clinics rejected or delayed (sic),” the AAP leader tweeted.

3-Under Sheila Dixit Govt, Aid & Advice of Elected Govt was binding on LG. LG was not free to reject schemes For Ke… https://t.co/fXdgxDIvnB

In a landmark verdict, the Supreme Court today held that the Lieutenant Governor did not have independent decision-making powers and was bound to act on the aid and advice of the council of ministers.

The SC verdict may slow down the party’s ongoing full statehood agitation because the court has “restored” Delhi government’s powers and the movement was woven around the stand that the Centre and LG were not allowing it to work, party sources said.

Full statehood to Delhi had also been promised by the BJP and the Congress. It can be achieved through Constitutional amendment by Parliament. All political parties, especially the BJP will have to fulfil it, AAP spokesperson Chhadha said.

“The full statehood movement will continue as a struggle by the Aam Aadmi Party and people of Delhi,” he said.

The judgment pronounced by Chief Justice Dipak Misra, who was heading a five-judge Constitution bench, also held that the LG could not act as an “obstructionist”.

It added that all the decisions of the council of ministers must be communicated to the LG, but that did not mean his concurrence was required.

The decision comes as a major victory for the AAP government, which had been in a constant tug of war with the LG over the powers wielded by the two branches of the executive.