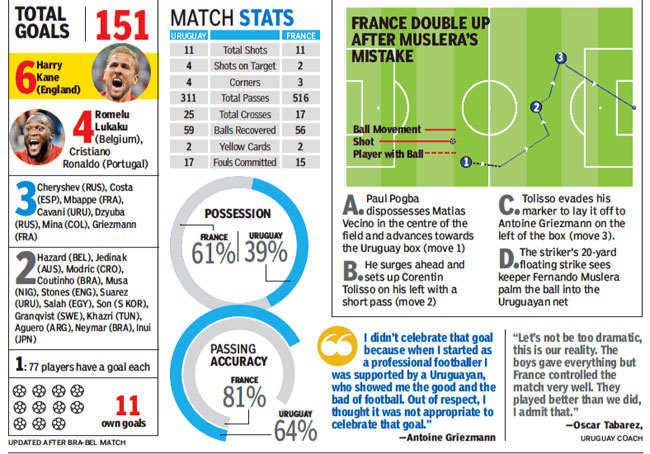 SOCHI: Uruguay showed a combative spirit but made little effort to play the kind of football their immediate neighbours Argentina are known for.

At the picturesque Nozhny Novgorod Stadium on Friday, France sailed into the World Cup semifinals riding on goals from Raphael Varane and Antoinne Griezmann in either half, keeping the knife-between-the teeth Uruguayans in check.

After realising that Edinson Cavani could only watch from the sidelines, the Uruguayans went for the man more than the ball. Oscar Tabarez, who was earlier praised profusely by his opposite number Didier Deschamps for doing a wonderful work, probably gave in to player power.

Nahitan Nandez came flying in like a truck without brakes to tackle Lucas Hernandez, the French left back, halfway from the Uruguayan goal, just to lay down the marker in the third minute itself. Cristian Stuani, Cavani’s replacement, showed he is a better tackler and crashed into Hernandez again, thus trying to throw a spanner into France’s well-oiled works.

France were too sophisticated to be subdued by such brutal tactics and Benjamin Pavard’s hasty cross was cushioned by Olivier Giroud towards Kylian Mbappe. The 19-year old striker’s header looped over the bar. It is one area that the precocious talent has to work on to be among the best in the world. He has also got to learn how not to give in to provocation. Antoinne Griezmann can spare some time to educate Mpabbe in the art of staying focused on his job.

As the game was slowly sliding towards becoming a mere physical battle, Raphael Varane decided to drag it back on track.

Corentin Tolisso changed gears on his run down the right when Rodrigo Bentacour chased in and landed a kick on his shin. The Italian referee immediately flashed the yellow towards an unrepentant Bentacour. Griezmann whipped in a swirling cross for Varane from the eventual free-kick. The Real Madrid defender, who had started his perfectly-timed run unnoticed, directed his glancing header towards the far corner of Fernando Muslera’s net.

Uruguayans came alive only during set-pieces and from one such delivery into the melee, Martin Caceres rose high to send a thumping downward header towards the bottom corner. Hugo Lloris dived to his right in a flash and his strong palm kept the ball out. Back quickly on his feet, the France captain blocked the view as Diego Godin fired over from close.

Tabarez rang in the changes soon after the second half got underway but a change in personnel didn’t influence a change in Uruguayan attitude.

Already in control of the game, Paul Pogba launched into one of his trademark galloping runs down the middle and slipped a pass to Tolisso. He squared it to Griezmann, who was roaming far away from the attentions of Godin and Jose Gimenez, his Atletico club mates.

Till then, the move looked innocuous and Griezmann felt like testing Muslera with a decently hit left-footer. The experienced Uruguayan tried to punch the object flying towards him instead of gripping it and failed to get his body behind. The ball bounced off his gathered palms and went into the net.

Not only were the French sleek and subtle in their passing, luck too smiled in their favour.

The second goal killed the contest.

PS: Luis Suarez was also there on the pitch. He was full of running, chasing the ball he hardly got to touch. He was surely missing Cavani.