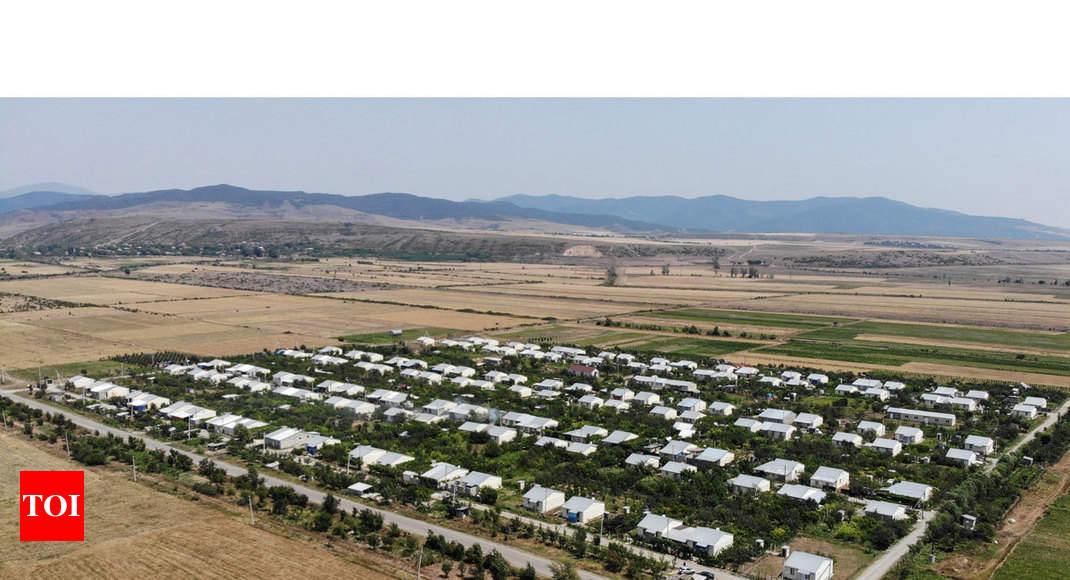 KHURVALETI (GEORGIA): Standing in a meadow in the sweltering heat and amid the chirping of grasshoppers, 84-year-old Dato Vanishvili looks through a barbed wire fence and sighs: “It’s like living in a prison, here.”
Around five years ago, the farmer woke up one morning to strange sounds outside his house.

When he looked out, he saw Russian soldiers erecting a barbed wire fence across his property, as the breakaway region of South Ossetia was physically separated from the rest of Georgia.

Vanishvili was trapped on the side of his village, Khurvaleti, that fell under the control of separatist South Ossetian authorities.

And ever since that morning in 2013, he has been unable to cross into Georgia.

Five years prior to that, in August 2008, Russia and Georgia had fought a five-day war over South Ossetia, a tiny enclave where Russia maintained a military base.

Georgia had launched a large-scale military operation against separatist forces who had been shelling Georgian villages in the region.

And over the five days that followed, Russia defeated Georgia’s small military, sweeping into the Black Sea nation of four million people, bombing targets and occupying large swathes of territory.

Russia then officially recognised South Ossetia, alongside another secessionist Georgian region, Abkhazia, where Moscow similarly had a military base.

Following the Russian invasion, Human Rights Watch accused Moscow of overseeing the “wide-scale pillaging and burning of Georgian homes and the killing, beating, rape and threatening of civilians” by South Ossetian forces.

Vanishvili is one of the few Georgians to remain in South Ossetia after the bloody conflict, as most of his family and relations were forced to flee in what the EU has described as “ethnic cleansing“.

“Eighty Georgian families lived here before the war, only me and my grandson stayed,” he said.

“Ossetians told my grandson that if he tried to cross the border, they will catch him, take him to Russia and throw him in jail.”

It’s a threat that appears to be very real.

In February, one of the detainees, a 35-year-old vegetable seller Archil Tatunashvili, was tortured to death in a South Ossetian prison.

His mutilated body was only returned to his family after weeks of diplomatic negotiations by Western countries.

Prosecutors from the International Criminal Court — which in 2016 opened an investigation into war crimes committed during the conflict — estimate that up to 18,500 ethnic Georgians were forcibly displaced from South Ossetia.

Despite fierce opposition from Moscow, the UN General Assembly has adopted 10 resolutions calling for their “safe and dignified return to their homes.”

But a decade after the war, they still live in settlements built for them across Georgia. And they blame Russia for their plight.

“Russia invaded Georgia to prevent us from becoming a member of the European Union and NATO, to keep the Caucasus in its claws,” said 54-year-old refugee Gennady Zaridze.

He now lives in Tserovani, a windswept settlement built in eastern Georgia for 2,000 families displaced from South Ossetia’s Akhalgori district.

Speaking to AFP, Georgian President Giorgi Margvelashvili said he was constantly urging Tbilisi’s Western allies to step up pressure on the Kremlin to “end the occupation of Georgian soil.”

But countless rounds of internationally-mediated talks launched in October 2008 in Switzerland to resolve the conflict have so far brought little, if any, progress.

Margvelashvili stressed that Georgians “must not lose hope”.

That is “exactly” what Russia wants them to do, he said.

“They tell us: ‘Whatever you do, your fate will be decided in Moscow.’ My answer is: this is not the case.”