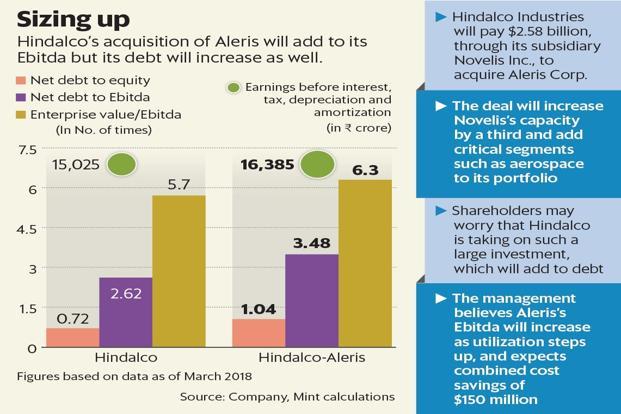 The one difference between Hindalco in 2007 when it acquired Novelis and now is that it has hands-on experience in this field in those markets.

How should investors view the gigantic investment made by Hindalco Industries Ltd to acquire Aleris Corp., through its subsidiary Novelis Inc.?

Nervousness is already visible in Hindalco’s share price, which has fallen by 6% since news emerged that the deal was close to being concluded. The consideration of $2.58 billion to buy Aleris is what would worry investors most, as Hindalco’s net debt is likely to increase by about 40%.

While that is significant, the deal also values Aleris at an enterprise value (EV)/Ebitda (earnings before interest, tax, depreciation and amortization) of 12.8 times. That’s high when you consider that Hindalco itself trades at a valuation of 5.7 times. Then there is also the question of Aleris’s relative underperformance. It earned an adjusted Ebitda of $250/tonne in calendar 2017 compared to Novelis’s $381/tonne in FY18.

While the gap is significant, bridging it is where Hindalco sees the opportunity, and possibly explains the valuation as well. For instance, the company expects that when it will complete the acquisition, the $202 million Ebitda figure will actually increase to $360 million. If achieved, the deal’s EV/Ebitda reduces to a more reasonable 7.2 times.

Why will the Ebitda increase that much? There were some outages in Aleris’s current operations which affected profits. This will get added back. Then, new capacity is expected to ramp up and also contribute. After all, the consideration factors new investments made by Aleris of about $900 million. The combined entity also expects to earn $150 million in savings across its global operations in three-five years.

In the aluminium rolled products business, capacity addition is a continuous process tied to your customers’ plans. For instance, as an automobile company charts out its expansion, suppliers such as Novelis and Aleris also invest accordingly. That’s the only way to grow. Novelis had also planned its own investments for growth.

Why acquire Aleris then? Size is one. Aleris adds one million tonnes of processing capacity to Novelis’s, increasing its capacity by a third. It brings new segments into Novelis’s fold, especially in a critical industry such as aerospace, but also in others such as building and construction, and trailer truck segments. The acquisition saves the time Novelis would have taken to create a presence in these segments by itself and then build scale. Also, since Aleris was in play to be acquired, Hindalco also protects its own market position to an extent by this acquisition.

The one difference between Hindalco in 2007 when it acquired Novelis and now is that it has hands-on experience in this field in those markets. While the years since that acquisition have been challenging, particularly due to the global financial crisis, it has turned around Novelis. In FY18, Novelis’s Ebitda was $1.2 billion compared to $867 million five years ago, and it generated free cash flow of $406 million, compared to a negative $16 million a year ago.

That should give investors the confidence that Hindalco can integrate Aleris well, and achieve the Ebitda target and projected cost savings. The main risk it faces is on the external front. The rolled products business is relatively insulated from the trade wars, since metal price is a pass-through (albeit with a lag).

But some global auto giants have already warned that their earnings may be affected by the tariffs. Other user industries of aluminium products may follow suit. If these industries cut back on output as a result of a less-rosy outlook, that can affect suppliers such as Novelis and Aleris.

This was a risk that Novelis faced even without Aleris. But it was well-placed to weather such shocks because its performance had improved significantly over the years. Now, it will become a little more vulnerable to such severe external shocks, at least till the time it brings Aleris’s performance on a par with itself. That’s what may worry Hindalco’s shareholders in the near term.