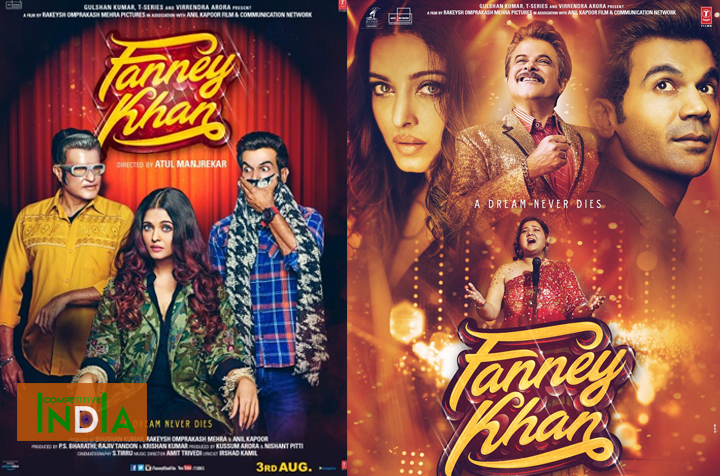 Prashant Kumar a.k.a. Fanney Khan (Anil Kapoor) is a small-time singer who has made a name for himself in local gatherings. He aspires to turn his teenage daughter Lata Sharma (Pihu Sand) into a rockstar on the lines of Baby Singh (Aishwarya Rai Bachchan). His factory closes down and he has to drive a taxi in order to make ends meet. Chance leads him into kidnapping Baby and he’s helped in this misadventure by Adhir (Rajkummar Rao). Both are out of their depths and are manipulated by Baby’s rakish secretary for his own devious ends before fate intervenes to set things right.

Fanney Khan is an adaptation of the Oscar-nominated Belgian film Everybody’s Famous! (2000). The film is set in the big bad world of showbiz and it doesn’t cut corners while showing how heartless this world can be. There is even a scene where a top star is asked point-blank whether she provided sexual favors to reach to the zenith. Rajkummar Rao’s manipulative girlfriend leaves him at first instance to cozy up with a himbo who might advance her career. Aishwarya Rai’s mentor drops hints all the time that he wants to sleep with her and her manager wants her to orchestrate a wardrobe malfunction in order to garner higher TRPs. Whether it’s alright to do a ‘compromise’ for a role or an assignment is earnestly discussed by teenage girls. Baby Singh is shown to be a friendless and lover-less individual because she can’t trust someone and really doesn’t have the time for a relationship. So, in the best traditions of the Stockholm Syndrome, she gets attracted to her kidnapper Adhir. At the other end of the spectrum are talented singers like Fanney and his daughter. He couldn’t get a chance at stardom but wants his daughter to shine. Being overweight, she’s body-shamed at every reality show. It’s pointed out clearly that today, a singer has to be a showstopper as well. Merely having a good voice is a thing of the past. What makes it all believable and hugely ironical at the same time is that top stars like Anil Kapoor, Aishwarya, and Rajkumar are enacting these archetypal figures. They know the industry’s dark secrets and we don’t know how much are they hiding and how much is revealing through their expressions.

But this isn’t just a film about the entertainment industry. It’s also a story about a father’s love for his daughter. A love that makes him cross boundaries he wouldn’t have dreamt of the crossing. It’s not clear why his daughter is so pissed off all the time with Anil or why he takes it lying down. In Indian households, the mother at least would have reprimanded the child on her bad behavior. But leaving that aside, you do empathize with the fact that a desperate man will do anything to set things right, however illogical it might sound. It could all have been excessively melodramatic if not for the light-hearted moments. Both Anil and Rajkummar are shown to be bumbling amateurs when it comes to kidnapping. Rajkummar develops a huge crush on Aishwarya and she starts treating her captivity as a much-needed vacation of sorts. The director oscillates between drama and comedy and that’s the sore point with the film.

It’s also sloppily written. Baby Singh is shown to live in a posh apartment building but there is no security video footage of Adhir stealing her dog. The family is shown to be North Indian but Anil adopts a Hyderabadi tone in between for no reason whatsoever. It’s supposed to be a musical but barring the Tere jaisa tu hai song (rendered superbly by Monali Thakur), the score doesn’t touch the high expected from a musical. You watch the film because of the combined talents of Anil Kapoor, Aishwarya Rai Bachchan, Rajkummar Rao, Pihu Sand and Divya Dutta, who plays her mother. Anil has brought his own days as a struggle to the fore in his performance and is really the soul of the movie. Pihu makes an impressive debut as the angst-ridden teenager and lets’ hope she continues to get films in future. Aishwarya has been given Beyonce like moves in her dance video portions. She turns her stardom in a thousand watt bulb and plays the diva to the hilt, giving just the right edge to her character. She shares an unlikely chemistry with Rajkummar, who gets to be a fanboy in the film and has some of the best lines as well. Divya is dependable as ever as the dutiful mother and wife, who acts as the bridge between the father and the daughter.

Dreams do come true but there’s always a cost and sometimes you need a miracle to realize them — that’s the underlying message of this film. Atul Manjrekar hasn’t made the perfect debut but has shown his heart is in the right place…