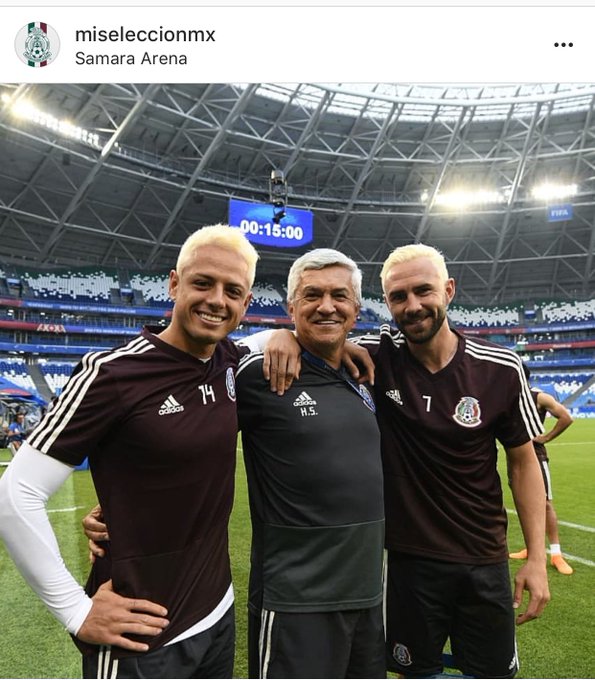 Brazil and Mexico meet in the World Cup round of 16 in what is sure to be an entertaining matchup of two teams that like to run. Will Neymar and Coutinho continue their strong play for Brazil? Or will Mexico shock another World Cup favorite?

The teams are out for warmups in Samara, giving everyone their first extended look at the bleached blond dye jobs Javier Hernandez and Miguel Layun got done between games. It’s, um, something.

There’s confirmation that Brazil makes only one change, sending out Filipe Luis for the injured Marcelo.

The presence of Marquez in the Mexico lineup today sends a couple of signals. The first, shown in his first appearances in the tournament and confirmed by today’s start, is that Mexico is not letting anything affect its preparations or team selection for matches at the World Cup. But the more important signal is this: Manager Juan Carlos Osorio has clearly decided that he needs a veteran presence in the center of his defense against Brazil. And he trusts Marquez, who has seen it all in a long club and international career.

In some ways, the move is reminiscent of Russia’s starting 38-year-old Sergey Ignashevich against Spain (and every other game). Even at their age, he and Marquez act as a security blanket for a coach, a relief that no matter what happens, they won’t be fazed by it.

In a bit of unfortunate timing, a bit of Juan Carlos Osorio’s pregame praise for Brazil on Sunday reads kind of like a dig today.

“Brazil are a great team, they’re the best team in the world,” Mexico’s manager said. “That is because each of their players can control, pass and they behave as a unit just like Spain, Germany.”